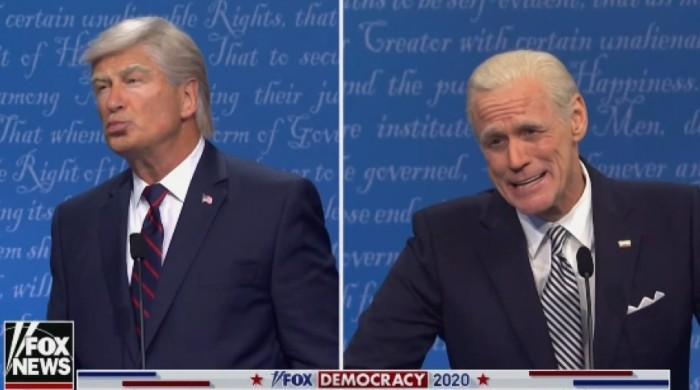 Kicking off the new season of SNL, the comedic actor left the audience in splits with his impression of the former vice president as the NBC variety show took on this week’s presidential debate.

As the show opened, a voice could be heard saying: “The following is a re-broadcast of Tuesday’s presidential debate, even though Tuesday feels 100 days ago.”

“We thought it was important to see it again since it might be the only presidential debate. And it was pretty fun to watch, as long as you don’t live in America,” added the narrator.

The camera then moves on to Beck Bennett playing moderator Chris Wallace as he introduces Alec Baldwin’s Donald Trump to the stage during the sketch.

“And you did take the Covid test that you promised to take in advance, correct?” the moderator asked Baldwin’s Trump.

He then proceeds to call out Jim Carrey’s Joe Biden.

Carrey comes out as the Democratic nominee, saying: “Just one second, Chris,” as he measures the six feet distance between himself and Trump.

The amusing segment took a dig at the two White House hopefuls as the parody involved the two actors yelling at each other before Maya Rudolph’s Kamala Harris jumps in.

“You look at me, Donald. You do not treat my Joe like that. He’s a nice boy,” she tells Baldwin’s Trump.

Kim Kardashian shares a photo showing her in a chaotic situation