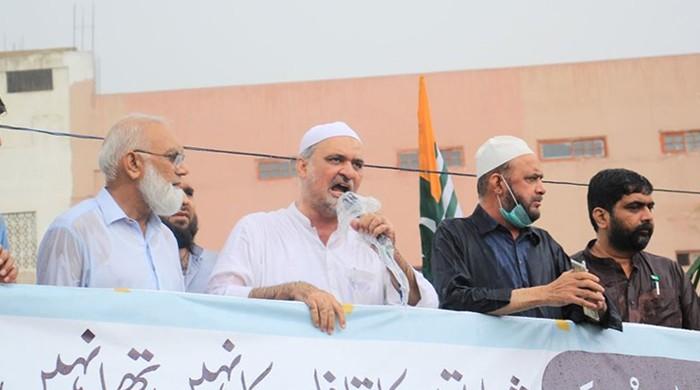 KARACHI: Jamaat-e-Islami Karachi chief Hafiz Naeem-ur-Rehman on Thursday demanded that the terrorists involved in attacking the party’s rally, a day earlier,  be brought to justice.

The attack on the Kashmir Solidarity Rally had a party worker dead and nearly 40 people injured, according to official figures.

demanded government action against the terrorists involved in the attack a day earlier at the party’s rally that killed one worker and injured nearly 40 people.

The JI Karachi chief questioned how terrorists were able to “toss an explosive at a public proceeding in broad daylight and get away with it”.

Rehman called for the arrest of those responsible for the attack along with their accomplices. ”They should be brought before the people,” he added.

The JI leader said that his party’s resolve would not be shaken by such attacks and vowed to take out bigger rallies in support of Kashmir.

”India is involved in this terrorist act,” he said, adding, “Without local agents, India cannot accomplish anything in Pakistan.”

On Wednesday, the party had arranged a Kashmir Solidarity Rally in Karachi’s Gulshan-e-Iqbal area.

According to police, the blast was caused by a “cracker”, which was tossed near the rally by unidentified assailants on a motorcycle. They managed to flee afterward.

‘Willing to speak to UK PM about deporting Nawaz’