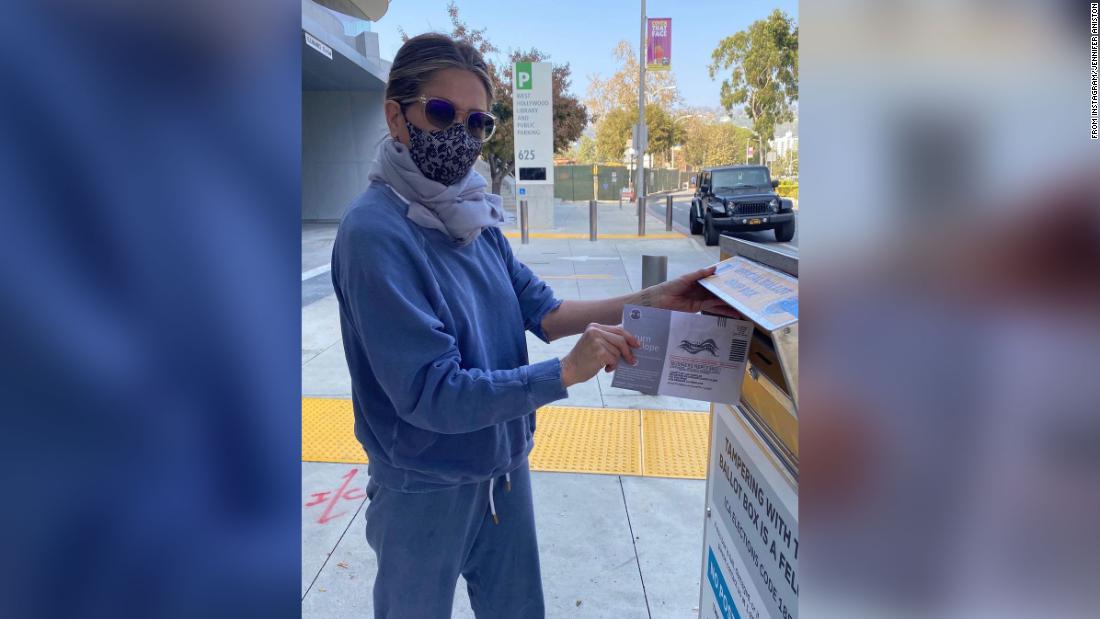 In an Instagram post Friday, the actor shared with her 35.7 million followers that she had voted for Democrats Joe Biden and Kamala Harris.

“Our current President has decided that racism is a non-issue,” Aniston wrote. “He has repeatedly and publicly ignored science … too many people have died.”

The “Friends” star had voted by mail, depositing her ballot in an official drop box at the West Hollywood Library in West Hollywood, according to her Instagram photo. In the lengthy post, Aniston asked followers to “really consider” the LGBTQ community, racism, the elderly and environmental issues when voting.

“This whole thing isn’t about one candidate or one single issue, it’s about the future of this country and of the world,” Aniston wrote. “Vote for equal human rights, for love, and for decency.”

“It’s not funny to vote for Kanye. I don’t know how else to say it,” Aniston wrote. “Please be responsible.”

Aniston is not the first to discourage others from voting for West.

“Kanye West will not garner enough voters to become president,” Terrance Woodbury, a Democratic pollster and partner at HIT Strategies told a CNN reporter last month. “But he can garner enough voters to determine the outcome of this election.”
This is not the first time Aniston has used social media to talk about important issues. In June, she posted about the necessity of mask-wearing.

“This simple and effective recommendation is being politicized at the expense of peoples’ lives,” Aniston wrote. “And it really shouldn’t be a debate.”

Giroir: This is how we get out of the pandemic – CNN Video

Analysis: How the coronavirus is really the only issue that matters