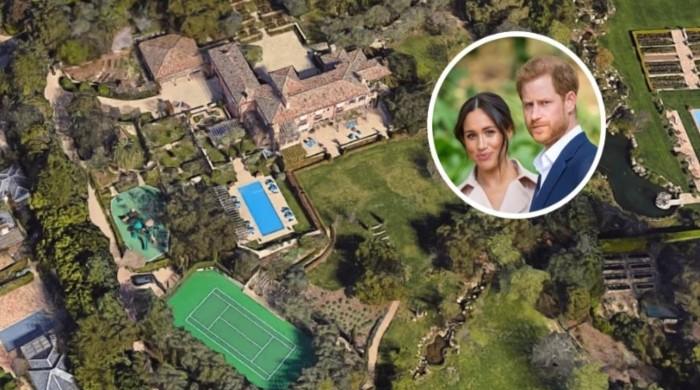 Now, new details have emerged about the Duke and Duchess’s California palace, revealing that the luxurious abode is every man’s dream.

“The house has nine bedrooms, 16 bathrooms which makes me wonder why you need two bathrooms for every bedroom, that is a lot.

“I think that just means that it is massive and it is convenient, I would love to have that. The mansion is on seven acres of land and it is 18,600 square feet. They have Oprah, Tom Cruise, Ellen Degeneres as neighbours,” they added.

“The main house includes a library, an office, a spa with a separate dry and wet sauna. It also has a gym, a games room, an arcade, a movie theatre, wine cellar, a garage with space for five cars,” the host duo went on.

They continued, “There is endless lawn space with rose gardens and there is supposedly beautiful Italian cyprus trees. There is a tennis court, tea house, a children’s playground and a large outdoor pool.”

The commentators added that they were super impressed by the children’s playground.

Talking about the former royals’ financial responsibilities with the house. Fiorito said, “The details of the mortgage, I told you that for the $14.6million home they actually put down a third of that. So they are mortgaging $5million according to sources.”

“That calculates to a mere $43,000 a month for a 30-year mortgage. An insider did say there was no outside financial assistance.”

Fiorito and Bowie admitted that they do not think Harry’s father Prince Charles paid anything for the Sussexes new home.