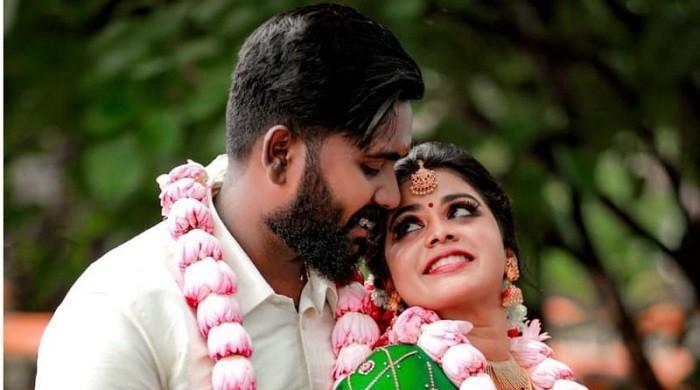 An Indian couple was caught in crosshairs after they shared pictures from their intimate wedding shoot on social media.

Despite online trolling, the couple refused to take down the pictures, BBC reported.

Lekshmi and Hrushi Karthik, who walked the aisle in a small ceremony in September, were bullied by social media users unapologetically after they uploaded pictures of them giggling, hugging, and chasing after each other in a field, wrapped in white silk comforters.

“Ours was an arranged-cum-love marriage,” Lekshmi told BBC, sharing that their idea was to have a post-wedding photoshoot that would be “memorable” to make up for their “subdued marriage ceremony” due to the ongoing COVID-19 pandemic.

Delving into the details about the controversial photoshoot, the couple shared that one of their friends had clicked the pictures after they decided to pose for a “romantic and intimate photoshoot” that could make up for their modest affair that was only attended by approximately 50 guests.

“It was great fun. We laughed through it. We were really excited about it. It was a part of our honeymoon, we were just married and we felt free,” Lakshmi recalled.

Things turned ugly for the newly-wed after they shared their pictures on social media to announce their marriage to the world.

“Trolls described the photos as ugly, vulgar and shameful; some said they were pornographic….[]; some advised them to get a room,” read the publication.

“We received two days of relentless hate,” says Lekshmi. “People said we were showing nudity, they said we were doing it for attention and seeking publicity,” the couple told BBC.

“The trolls included a lot of women too. They found my earlier photos where I was wearing no makeup and began comparing, saying look how ugly she looks in these photos,” she regretted.

On the other hand, few people also countered the raging criticism saying that the pictures were amazing and the couple should ignore the critical comments.

“We didn’t know who the trolls were who were criticising us. We also didn’t know the people who were speaking in our support, but it made us very happy,” Lekshmi said.

Sharing about the reaction from her immediate family members, Lekshmi said: “Initially, our parents were shocked too, but we explained to them why we wanted to do it and they understood and have been very supportive. But many of our relatives accused us of aping the West.”