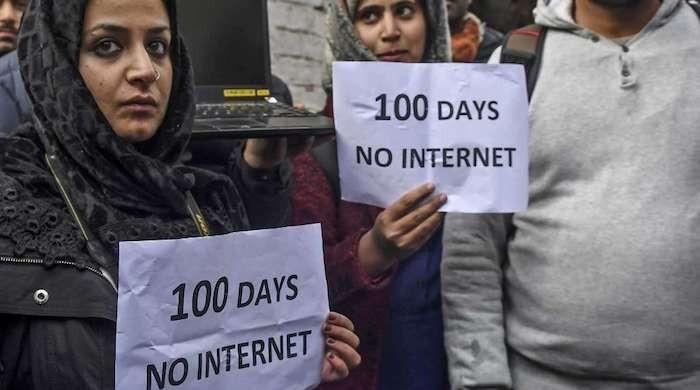 India accounted for nearly three-quarter of the $4 billion lost worldwide due to internet shutdowns, according to the Global Cost of Internet Shutdowns report released by Top10VPN.

The report estimated 1,655 hours of internet blackouts and 7,272 hours of throttled bandwidth in one year.

“As in previous years, India continued to restrict internet access more than any other country – over 75 times in 2020,” read the report. “The majority of these short blackouts were highly-targeted, affecting groups of villages or individual city districts and so were not included in this report, which focuses on larger region-wide shutdowns.”

“The true economic cost is therefore likely to be even higher than the $2.8BN we have calculated,” it added.

The Narendra Modi-led government imposed communication blackouts in the Indian Illegally Occupied Jammu and Kashmir (IIOJ&K) ahead of its controversial decision to revoke the autonomy of the occupied region.

But weeks of slow or no internet are a regular occurrence in the disputed region. The Indian government reinstated low-speed 2G internet services in January 2020, but a blackout in May massively set back health services and contact tracing efforts to curb the new coronavirus.

“During the longest internet shutdown in a democracy, the arbitrary arrest of senior Kashmiri political leaders, lawyers, rights activist and students became widespread,” said the report. “The restrictions have negatively impacted the distribution of medicine, businesses and schools.”

The Human Rights Watch (HRW) has said that “limiting of networks to 2G has made it impossible for online classes to function adequately”.

“Graduate students and teachers have been unable to participate in conferences or have their papers published, causing willful harm to their careers and violating the rights to education,” said the rights organisation.

The report said that Indian authorities continue to justify the lasting restrictions as “absolutely necessary in the interest of the sovereignty and integrity of India”.