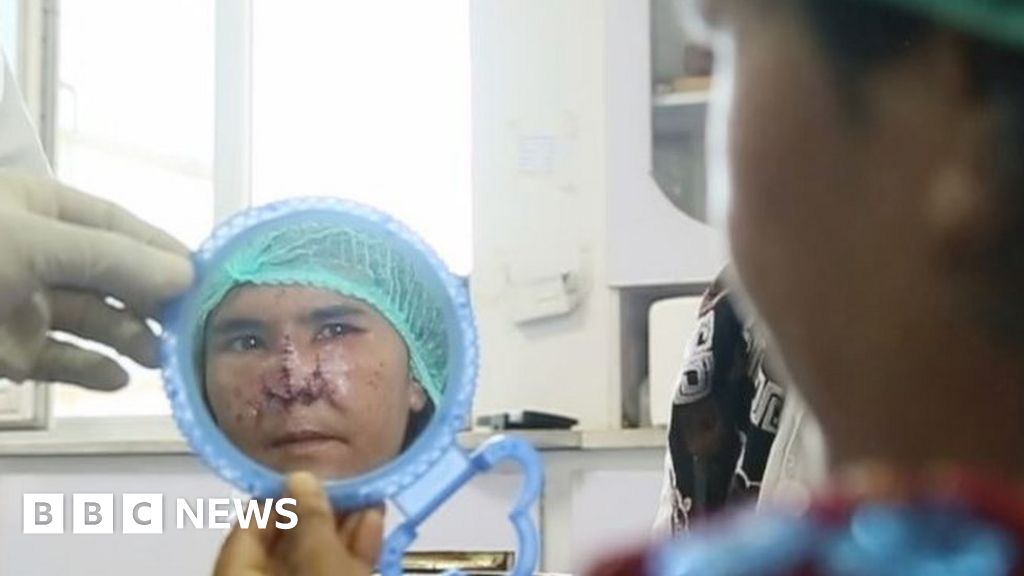 This story contains graphic images and descriptions of violent abuse

After more than 10 weeks of agony, Zarka saw a ray of hope.

In a small hand-held mirror, she could see her new nose. It was covered with stitches and blood clots, but instantly she felt good. Two months had passed since her husband had taken a pocket knife to her face.

“I am happy I got my nose back,” she told the doctors, as they replaced her dressing.

Domestic violence towards women is common in Afghanistan. One national survey cited by the UN Population Fund found that 87% of Afghan women had experienced at least one form of physical, sexual or psychological violence in their lifetime.

In the worst cases, women are attacked with acid or with knives. Often, the perpetrator is their husband or another relative.

Zarka, who is 28, had been married for ten years, with a six-year-old son, when her husband took a knife to her face. She was used to being beaten, but she did not expect it would go this far.

“He was telling me that I was an immoral person,” she said. “I told him this is not true.”

Zarka allowed the BBC to follow her recovery, and she described in interviews the domestic abuse which preceded the brutal knife attack.

Zarka was awake during her three-hour operation, under local anaesthesia.

“When I saw myself today in the mirror, the nose has recovered a lot,” she said, after seeing her new face for the first time.

“Before the operation it was not looking good,” she said.

Dr Zalmai Khan Ahmadzai, one of very few surgeons in Afghanistan capable of performing the facial reconstruction, said he was impressed with the progress Zarka was making

“Her operation went very well. There was no infection – a little bit of inflammation but it was not a problem,” he said.

Zarka was not his first such patient. Over the past decade or so, Dr Zalmai has treated dozens of Afghan women disfigured by their husbands, fathers and brothers.

Bartered into an abusive marriage

Zarka comes from a very poor family in Khairkot district, 250km (155 miles) south of Kabul near the Pakistan border. She cannot read or write.

Her marriage was arranged by her uncle when she was a child. “I was very young at the time, I did not know anything about life or marriage,” she said.

Zarka does not recall how old she was at the time of the engagement, and she cannot remember anyone asking for her approval. She was 18 when she was married.

Years later, she discovered she had been bartered by her uncle, who could not afford the bride price to marry one of her husband’s four sisters, so Zarka was offered instead.

She also discovered that her husband would beat his sisters.

Zarka husband’s was about her age, and earned a living tending to other people’s cattle. He was very violent from the beginning of their married life, she said.

They had a son together, but at some point in May this year her husband’s violence became intolerable and Zarka fled to her parents’ home. But she did not ask for her husband’s permission before leaving home, and he came to find her.

Her father initially refused to send her back, but he relented after her husband provided guarantors who made assurances about Zarka’s safety. As soon as she returned to the marital home though, the situation worsened.

“When I came back from my parents’ house, he beat me again, and charged at me wielding a knife,” she said. “I fled to a neighbour’s house because he threatened to cut off my nose.”

The neighbours intervened but it was a temporary reprieve. Zarka’s husband lured her back with the promise of sending her to her parent’s home. Instead he took her to another house.

“He grabbed me by catching hold of my clothes, saying, ‘Where are you are fleeing?” Zarak recalled. “There was a small garden, and he took out a knife from his pocket and cut off my nose.”

Her husband left her in a pool of blood, where her screams drew help from neighbours. One managed to find the sliced off remnants of her nose. Zarka was bleeding profusely and struggling to breathe.

She was taken to a local doctor, who told her that it wouldn’t be possible to reattach her severed nose.

A surgery offer on social media

Zarka’s village is effectively under the control of the Taliban. After her attack, delicate negotiations between local politicians and the militants helped her to reach Kabul for treatment.

During that time, Dr Zalmai caught the coronavirus and lost his wife to the disease. The 49-year-old doctor buried his wife in the town of Jalalabad and was back at work when Zarka arrived in Kabul.

“When she came to me her condition was very bad. Her nose was badly infected,” he said.

He gave Zarka anti-septic and anti-inflammatory pills and after about five weeks later she came back to Kabul and had her surgery on 21 July.

Zarka began the process of recovering form her assault. She felt heartbroken and ugly, she said. The police caught her husband and jailed him, but Zarka was becoming desperate for treatment to restore her face.

There was some measure of good fortune in store for Zarka. Photographs of her with a blood-drenched face were widely shared online and the images caught the attention of Dr Zalmai.

He posted on social media an offer to treat her for free, and with the help of local officials he brought her to Kabul for the operation.

“We first worked on the middle part of her nose which was cut by the knife,” Dr Zalmai said. “We took tissue from nasolabial folds (skin around the nose) and did the reconstruction surgery.”

Dr Zalmai told Zarka that she would recover and have her nose back. It was all she had hoped to hear in the two months since her attack.

“The blood flow is normal. Nerves will also be functioning,” he assured her.

Dr Zalmai said he would ordinarily have charged about $2,000 for the procedure. In addition, he provided about $500 worth drugs necessary for recovery.

The operation is a step forward. But Zarka may need further surgery and a silicone implant to bring her nose closer to its original shape – treatment she cannot afford. She also cannot afford psychological counselling for the trauma of her assault and surgery – a part of the recovery process all too often overlooked.

Zarka now mostly worries about her young son, who is still with her husband’s family. She wonders where he is, and if she will ever be with him again. “I miss him a lot, whenever I eat anything he comes to my mind,” she said.

Her father and uncle are reluctant to fight for custody of the boy. They fear Zarka’s husband would come after his son when he is released from prison and harm her again. They advised Zarka not to pursue custody.

“They are saying leave the boy,” she said. “But I cannot.”