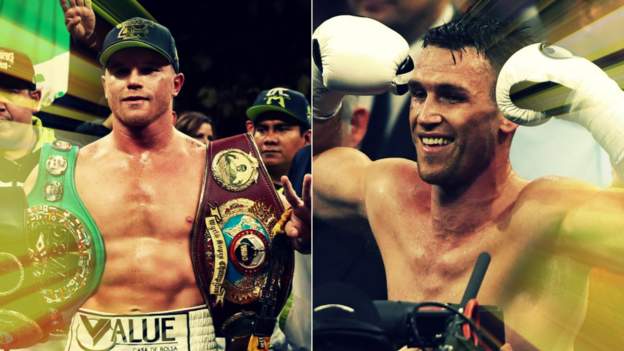 Callum Smith says he does not want the level of fame likely if he becomes the first fighter to beat Saul ‘Canelo’ Alvarez in more than seven years.

The Briton risks his WBA world super-middleweight title against the Mexican on Saturday, and the vacant WBC belt is also on the line in a unification bout.

Alvarez has just one defeat – against Floyd Mayweather in 2013 – and is arguably now boxing’s finest fighter.

“A win means more than I want, to be honest with you,” Smith told BBC Sport.

“It probably makes me a star in the boxing world. I do want star status and people to say ‘what a win that was’. I enjoy that. I don’t enjoy the fame side of it. I think when you chase money or fame, things come unstuck.”

A vision, a cup final and fear

Smith has just gone through an arduous strength and conditioning workout for his Texas bout. The session concluded with 12 rounds of 45 seconds on a climbing machine – with recoveries of 15 seconds in between.

One of his three boxing brothers, Liam, ran sprint intervals on the treadmill next to him and could offer plenty of pre-fight advice, having fallen to a ninth-round defeat by Alvarez in 2016.

“Come on Cal, a big last three,” he demanded as he watched his youngest brother complete his ninth climb.

Smith was on the floor after his final effort – but the short-term pain is serving a purpose.

Alvarez, he says, has been the dream opponent he has visualised while out on lonely runs on the streets of Liverpool. For him, this fight is his “FA Cup final” moment.

“When it gets really hard in training, you need a reason why you dig in and to go to a place you don’t maybe need to go to,” the 30-year-old said.

“Now you know if you don’t go there you’ll lose – Alvarez will beat you. You need that fear factor. I have always felt that where I have to step up, I have always performed. I believe this will be no different.”

Size, a star and an underdog

Smith’s endeavour has delivered 27 wins from 27 fights and yet he starts as the underdog, such is the colossal reputation of Mexico’s latest fighting hero.

Alvarez, like Smith, is from a family of fighters. All six of his brothers boxed at some level. None of them came close to his status and subsequent fortune.

Few, if any, have called the shots in boxing like Alvarez in recent years. He signed a record-breaking £278m broadcast contract in 2018 and walked away from it after two years. He is the opponent fighters long to face, given the earnings on offer.

The Mexican appears fixed on enhancing his legacy and has claimed versions of the world title in four weight divisions – spanning 154lbs to 175lbs.

Smith – a fighter considered physically big for his 168lbs division – has the size advantage over his opponent, and is aiming to make it count.

“He is a superstar and you could probably say he is the best pound-for-pound fighter in the world,” Smith added.

“In my view, he is a middleweight (160lbs). The saying ‘a good big ‘un beats a good little ‘un’ is sometimes true. Sometimes all the ability in the world can’t make up for a disadvantage you have in natural size. I believe that will play a part. I am big but have ability to go with it.”

The workout done, Smith sat on the ring apron with Liam and watched back clips of his brother’s defeat by Alvarez four years ago. They were quickly engrossed, their eyes transfixed – even though they knew how it would turn out. A sickening body shot ended the night.

Watching the footage, Liam murmured to his brother about the techniques Alvarez used that night. He explained to Smith how from round one, he knew his opponent was using “cute” ways to lure him into traps. Fighters of lesser ability may be focused on simply settling into a bout so early on.

Smith expects a “thinking man’s game” on Saturday. He expects his toughest night. He expects to still be a world champion the next day and he expects to be the same man amid the praise.

“I want to test myself and find out how good I am,” Smith said. “He has proven to be one of the elite. I have proven I am world class. Can I move up and live with the elite? I believe I can and that this will fight will show that.

“They don’t come much bigger than this. The win is everything. In terms of the popularity, it will come with it but in terms of my lifestyle, it won’t change me.”