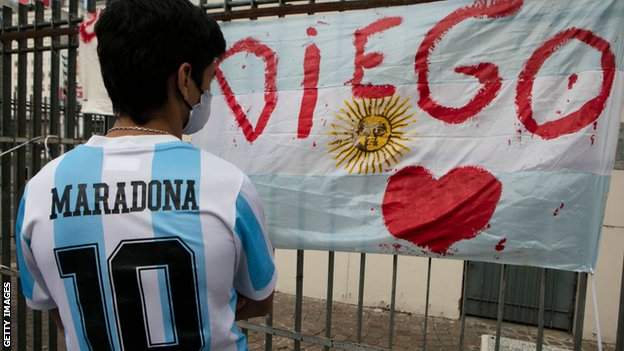 It was less than a month ago that I wrote how Diego Maradona had, against all odds, reached his 60th birthday. A day, I suggested, many had doubted this most complex of men would see.

As we mourn his passing, it seems almost irrelevant to say that we could all see this coming, that we knew his body was gradually giving up, and his mind was beginning to struggle, because somehow where Diego Armando Maradona was concerned, the normal rules never seemed to apply.

As much as I thought I knew Maradona, I realised once I began to research my book on him that I knew virtually nothing.

And the reason for that is because there were 100 different Maradonas. The magician, the cheat, the god, the flawed genius, the loving father, the serially unfaithful husband, the generous benefactor, the foul-mouthed oaf, the boy from the barrio with magic in his boots and the man who made it to the top of the mountain and fell down it, his body broken by cocaine.

From the moment he joined Argentinos Juniors as a youngster, it was obvious that this was no normal player. Today his skills would afford him greater protection. Back then they merely served as the red rag of provocation that would guarantee he would be the victim of brutal challenges wherever he played.

Those challenges, many unpunished, left him to deal with a host of dreadful injuries throughout his career and ensured he spent much of his life in crippling pain.

Among them, during his time at Barcelona, was the notorious 1983 tackle by Athletic Club’s Andoni Goicoechea – nicknamed the Butcher of Bilbao in the UK. Maradona was left with a broken ankle. To this day, Goicoechea has a glass display case at home in which he keeps the boots he wore when he made that dreadful challenge, boots that to him have a more positive meaning because later that week he would wear them to score a Uefa Cup goal. To Goicoechea, it is a stark reminder of the highs and lows of football.

The rules changed as a direct result of some of the injuries Maradona received. When I interviewed him a few years ago, he told me he thought players such as Lionel Messi owed him a great deal because some of the tackles he had endured would never be allowed today.

By the time he had arrived at Napoli in 1984, he was on course to represent more than just a team but the hopes, dreams and aspirations of a whole country. Then came that unforgettable quarter-final match against England in the 1986 World Cup.

That Sunday in Mexico City, the world saw one man single-handedly – in more than one sense of the phrase – lift the mood of a depressed and downtrodden nation into the stratosphere. With two goals in the space of four minutes, he allowed them to dare to dream that they, like him, could be the best in the world. He did it, as we well know, first by nefarious and then spellbindingly brilliant means.

In those moments, he went from star player to legend.

One of the people closest to him said that, as he could produce goals like his second, he didn’t need to score any like his first. Maradona laughed it off, happy to represent so many frustrations and to have such a loyal following.

Last month, I also wrote that to understand Diego properly, you have to know the enigma that is Argentina; a country that needs such figures to be its messiahs, to carry it to the level of greatness of which it considers itself worthy. It also needs to be appreciated that this was a man who lived a story of incredible paradoxes, of a host of mistakes and subsequent corrections, of epic feats, of declines and resurrections.

Diego was a rebel. He was a rebel who had power – and not only knew it but was also prepared to use it frequently for any number of good causes or friends who needed his help.

When he was a young superstar with Argentinos, the club would play friendlies in Argentina and abroad and use Diego as the star of the show to get payment. It was the era of the first colour televisions and all the players were desperate to receive their, until then, unpaid win bonuses so they could buy one. They only received their money, though, when the 18-year-old Diego told the Argentinos president that if they weren’t paid then he wouldn’t play.

He was a pioneer for so many people in this sport and for so many aspects of the game that are now accepted as perfectly normal.

He was one of the first to fight for the safety of those forced to play in dangerous sweltering weather – of the sort experienced at the 1986 World Cup in Mexico. He was the first player to be prepared to shout from the rooftops his belief that Fifa was rotten to the core.

And he did it well before FBI investigators began uncovering corruption within football’s world governing body. He did it at a time when no-one wanted to rock the boat.

He rebelled because he believed in a sense of natural justice. He believed it was the footballers who should be the stars of the show and not the governing bodies. Throughout his career, he fought for a fairer deal, for more respect for talented players, including himself.

Napoli would prove to be his greatest club triumph but also the scene for his saddest decline. He made Napoli and Napoli made him… and then they broke him. And he broke himself.

In his first season, the club struggled to work with him, unwilling to take on board his obvious talent. They finished eighth. Then they began to understand how important he was to the club, and finished third the following season.

So it might be fair to say that Maradona’s peak started after that, in the 1985-86 season, when the team clicked. And then on the back of Argentina’s 1986 World Cup triumph, he led Napoli to their first Scudetto. By way of proving it was no fluke, he led them to that season’s Coppa Italia as well.

This was in 1987. Trapped in a goldfish bowl of a city where he could not move without being pursued by a mix of fans and paparazzi, he had resorted to taking cocaine in the toilet of his luxury home. He was already addicted, had started to miss training and was now surrounding himself with those sycophants happy to humour him along a dark path towards self-destruction while telling him how great he was and how much fun he was having.

He was already decaying.

He still managed to secure another championship with Napoli in 1989-90. But he was a shadow of the player he had been a few years earlier.

It is all part of the puzzle that is Maradona and what makes researching my book about him so fascinating.

Who was he really? Against England, he was a streetwise rewriter of rules and then a genius, all within less than 250 seconds. As a footballer and a man, he lived a life that hit the very highest of peaks before descending into the deepest, darkest troughs of despair. He was unable to cope with the god-like status bestowed upon him, yet was seemingly incapable of surviving without it.

He was misunderstood. As a result of being misunderstood, he felt he was unloved. It is impossible to find any other player who represented so many things to so many people, who lived the dream he wanted, the one they wanted too.

But what I will remember most is not the blunt, rude, overbearing character he could undoubtedly be but rather the man who was kind and considerate. I remember the man prepared to ignore a dozen or so Argentina shirts put out for him to sign and instead pick the top of my beloved Biggleswade United, the non-league club where I am chairman, and then ask me if I wanted him to be photographed with him holding it up.

Guillem Balague will be writing a regular column throughout the season and also appearing every Thursday on BBC Radio 5 Live’s Football Daily podcast, when the focus will be on European football.

You can download the latest Football Daily podcast here.