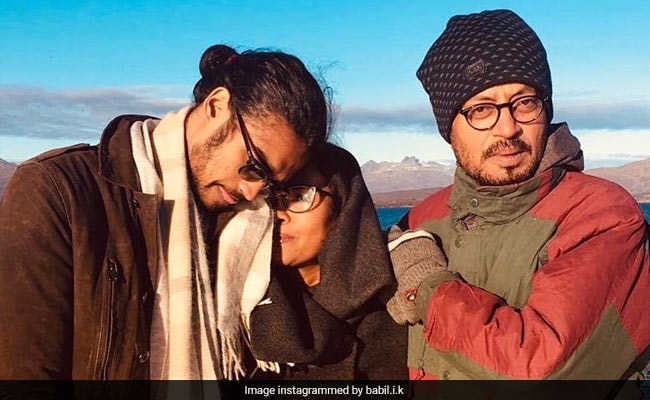 Late actor Irrfan Khan frequently feature in anecdotes, priceless memories and throwback posts on his son Babil’s Instagram entries. Recently, Babil shared a glimpse of a super special gift which Irrfan Khan had sent him once. Irrfan Khan died in Mumbai on April 29. Babil, just like his father, takes keen interest in movies and studies film in London. On his Instagram story, he shared a snippet of Irrfan Khan’s little ways to make Babil feel special as a film student – Babil revealed that Irrfan Khan had sent him the script of Joaquin Phoenix’s critically acclaimed film Joker even before its release. “The time baba (I used to called him baba) sent me the Joker script before it released and I was like ‘Wha-?’ and I hid it from all my friends till the film released,” Babil wrote in an Instagram story, along with a photo of the script, on which one can spot Irrfan Khan’s scribbling: “These are confidential.” In another Instagram story, Babil showed that Irrfan Khan also sent him the script of Jojo Rabbit, another cinematic gem. 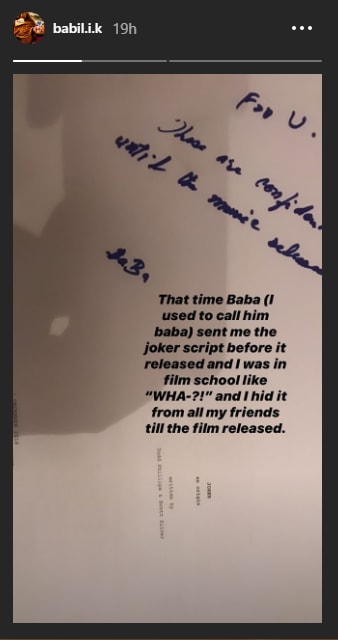 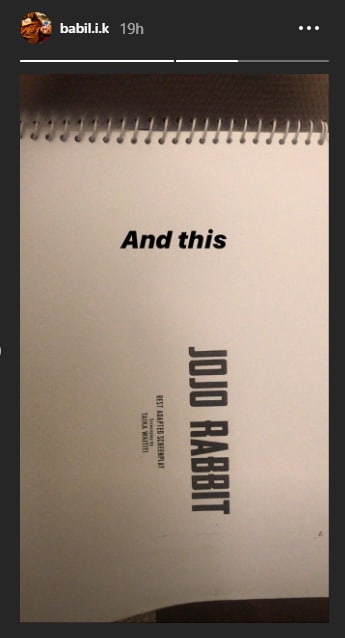 In a post earlier this week, Babil took a trip down memory lane as he shared glimpses of Irrfan Khan’s room in their old house in Mumbai’s Madh Island. “This is my father’s old room near the beach before we shifted to the city. This is where he did most of his work. Studying acting now, I think of one of the ideas of acting that he used to implement – that the craft has immense emotional similarities to playing around as a child,” he wrote.

This is my father’s old room near the beach before we shifted to the city. This is where he did most of his work. Studying acting now, I think of one of the ideas that he used to implement; that the craft has immense emotional similarities to playing around as a child. At age 9, when you hold that cricket bat inside the walls of your room, you can feel a stadium roar and see a bowler rushing to knock your head off. When I held that nerf gun in my hands, my father’s empty room always echoed in the silence of Madh Island, but in that moment I was John Wick surrounded by bad guys with machine guns, gunshots everywhere, and you can hear them, you know? I was a woman once, after watching chak de India and I’d get excited dribbling around imaginary defenders and then really shoot that solid ball with my hockey stick and I’d break something. Oh I’d always break something, ma would get so pissed. I think you’ve got to find the child in you and keep it alive, no matter how old you get.

Irrfan Khan, best known for films such as The Lunchbox, Piku, Hindi Medium, Haider, Paan Singh Tomar and Maqbool, among others, also starred in international movies such as Life Of Pi, The Namesake, Slumdog Millionaire, The Amazing Spider-Man, Jurassic World and Inferno. His last film was Bollywood movie Angrezi Medium.