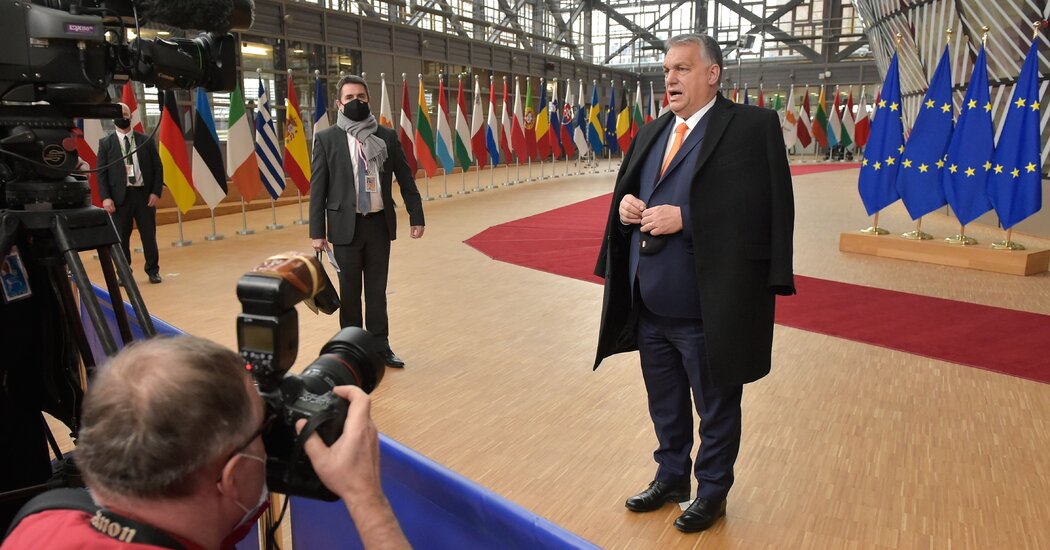 BUDAPEST — The Hungarian Parliament passed a raft of sweeping measures on Tuesday that curtail the rights of gay citizens and make it more difficult for opposition parties to challenge Prime Minister Viktor Orban and his party in future elections.

The new laws also relax oversight of the spending of public funds, which critics say will allow the government to use state money to benefit loyalists.

The legislation includes a constitutional amendment that critics say lowers the legal threshold for the government to declare a state of emergency, while also removing meaningful oversight of its actions while such a decree is in place.

The same amendment would also effectively bar gay couples from adopting children in Hungary by defining a family as including a man as the father and a woman as the mother. The amendment could also make it harder for single parents to adopt.

“Wherever it was possible, Fidesz chose to cement its power even more with these laws,” Agnes Kovacs, a legal expert with the Eotvos Karoly Policy Institute, said of Mr. Orban’s party.

She said the laws were cause for “grave concern” in a nation where Mr. Orban has already torn at the fabric of democratic institutions over more than a decade in power.

Mr. Orban, a populist autocrat who has proudly stated his vision of creating what he calls an “illiberal” state, has hollowed out many of the checks and balances viewed as integral to healthy democratic governance. He has aligned the executive, legislative and judicial branches to do his party’s bidding, making such sweeping legislation both possible and hard to challenge.

When pushing the new legislation, the government justified its actions in a written explanation by saying the constitution “is a living framework which expresses the will of the nation, the manner in which we want to live.”

But the will of the nation is increasingly indistinguishable from Orban’s will. And there are few critical voices left in the country to hold the government to account since Mr. Orban’s allies have gained control over the vast majority of independent media outlets. At the same time, his government has waged a relentless campaign against nongovernmental organizations dedicated to promoting good governance.

Renata Uitz, a professor of comparative constitution law at Central European University, said the new rules regarding the use of emergency powers, which now can be declared over broadly defined political disturbances, gave even more power to the executive.

Previously, she said, “you actually had to try and stage a coup and forcefully change the constitutional order.” Now, she said, an unruly demonstration might be enough for the government to invoke the law. These changes are slated to take effect in 2023, after Hungary’s next elections.

Mr. Orban, like other leaders in East and Central Europe, has also stepped up his attacks on L.G.B.T. people, casting them as an enemy of the state and of Christian values — much in the same way he demonized migrants in the past. As the government campaign has intensified, surveys have shown a rise in homophobia.

Earlier this year, the government adopted legislation tying an individual’s gender to the person’s sex and chromosomes at birth — the first law of its kind in Europe and a clear attack on transgender rights.

The new legislation barring gay couples from adopting children comes at a time when Mr. Orban’s far-right government is dealing with the downfall of a key party official in a sex and drugs scandal.

The police apprehended Mr. Szajer and said they had discovered ecstasy in his belongings. Mr. Szajer has denied that the drugs were his, but admitted having attended the “house party.”

While Mr. Orban’s nativist policies have drawn criticism from the European Union, his government has successfully parried the bloc’s attempts to curb Hungary’s slide into authoritarianism.

Mr. Orban, along with the government of Poland, held the fate of the $2.2 trillion E.U. budget deal hostage for weeks as they fought against measures that would have firmly linked financial assistance to measures designed to ensure member states adhere to the rule of law. The two countries dropped their veto after a compromise was reached to water down the requirements.

The budget deal, in the view of many outside experts, may actually end up bolstering Mr. Orban because his government stands to receive a large infusion of cash before the country’s 2022 national elections.

Mr. Orban has already been accused by critics of using public funds to reward loyalists and build support.

In the legislation passed on Tuesday, the government has redefined public funds in a way that critics say will make it much more difficult for journalists to scrutinize the use of the money.

“Orban constantly changes the rules to the game,” said Akos Hadhazy, an opposition lawmaker. “Hungary is sure to receive massive subsidies from the E.U. over the next two years, which will make it easier for the prime minister to issue payouts to those who serve him.”