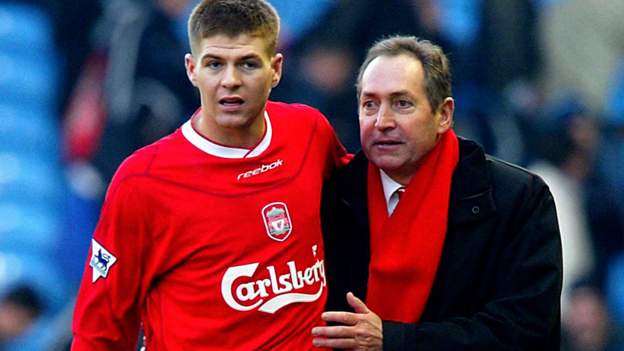 Steven Gerrard says he is finding it “really hard to come to terms” with the death of “special man” Gerard Houllier, his former Liverpool manager, aged 73.

The Rangers manager said “yesterday was a really tough day” for himself and assistant Gary McAllister.

Both played under the Frenchman while he was manager at Anfield.

“Gerard obviously played a huge part in both our careers – and also our lives,” Gerrard said. “He was more than just a manager. A caring man, a loving man.”

Gerrard was handed his Liverpool debut by Houllier in November 1998, five months after the former France head coach arrived at Liverpool, while McAllister was signed from Coventry City two years later.

“Throughout your career, different people look after you and shape you,” Gerrard said. “I always try and take all the best bits from all the coaches and managers I worked. It’s impossible for me add the charisma, the care and the love that Gerard carried.

“This is not a guy who would focus solely on football and what you gave to him in terms of the relationship player-to-manager. This was someone who, at my age, wanted to change me as a human being into an elite professional, who wanted me to be a better person, who wanted me to really understand the tactics and the game in a different way and become an even better player and build all the other stuff around the talent I had at that age. I’ll never forget that.”

Gerrard, whose current team lead the Scottish Premiership, would win the FA Cup, League Cup, Uefa Cup, Super Cup and Charity Shield under Houllier, who he says shaped him into “a better player, a better person, a better leader”.

“So I’ve got an awful lot to thank the man for and I’m finding it really hard to come to terms with it right now,” he added.

“The news yesterday was very difficult to take. It’s a huge blow. I came in yesterday morning really happy after our result at the weekend and then to receive that news was a bitter blow.”