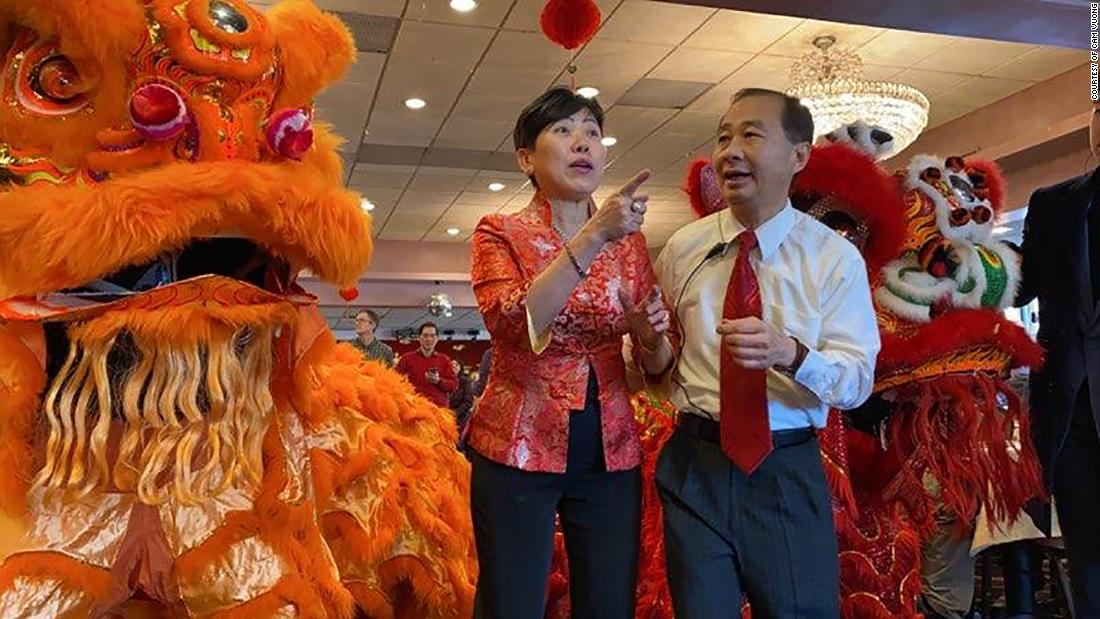 “My god, the business dropped 98%. …It [was] minimal in the beginning. It did kind of scare us,” the Georgia business owner recalls. “How can we survive if it keeps continuing like this?”

And if that wasn’t devastating enough, the dim sum restaurant he’s owned for 26 years in Canton, a suburban area near Atlanta, was targeted by vandals.

“Our window was broken, with a hammer, without any reason whatsoever,” Vuong says. “At the time we really [thought] that’s racism because they have a bad feeling about Chinese and they do whatever they do to damage your store.”

As many small businesses across the country continue to feel the economic misery stemming from the coronavirus pandemic, Vuong is among the growing number of Asian Americans facing a one-two punch of historic unemployment and discrimination.

As Covid-19 has spread, so has the racism and xenophobia — some of it which has been fueled by misplaced blame for the coronavirus, according to the Stop AAPI Hate Reporting Center.

The national coalition of community-based organizations tracks hate incidents against Asian Americans and Pacific Islanders and has received more than 2,500 reports of violence and harassment between March and August.

In a recent report, United Nations experts expressed concern over the “alarming level” of racially motivated incidents against Asian Americans and “and the contribution of the President of the United States in seemingly legitimizing these violations.”
The UN’s report cited public statements and social media posts that refer to the virus as the “‘Chinese virus,’ ‘Wuhan virus,’ or the ‘Kung Flu,’ including by President Donald Trump,” as allegedly being linked to the recent surge in racist attacks.

He says when he first reopened the restaurant he was concerned customers would stay away because they thought “you can get the virus from the restaurant. And I say that’s not true.”

It’s not true. But Marlene Kim, an economics professor at the University of Massachusetts, fears that misinformation could exacerbate the financial situation.

“Unfortunately, if people continue to believe these myths that Asians are more likely to have the virus, that they’re bringing the virus, certainly Asians will have a more difficult time, especially Asian businesses in Asian areas like Chinatowns I think will continue to suffer,” Kim says. “And we’ve seen a number of businesses already close in Asian areas of the country.”

The pandemic has taken a heavy economic toll on Asian Americans, who’ve experienced unemployment rates spike by more than 450%, from 2.5% in February to 13.8% in June, according to the U.S Department of Labor.

“It’s the worst I’ve seen in decades,” Kim says. “Asians typically have among the lowest unemployment rates, and it really shot up during Covid.”

Since reopening Canton House for indoor dining in May, Vuong has seen some of his customers gradually return. He was able to rehire most of his employees but business remains down by 50%.

The father of two says he’s breaking even but admits he’s still struggling. For dinner service recently, he recalls having only three tables the whole night.

Vuong, who came to the US as a refugee escaping communist Vietnam in 1979, says he’s saddened to see how the coronavirus has hurt Atlanta’s Chinatown, located about a mile away from his restaurant.

In Chamblee, Georgia, the Great Wall Gift Shop will be closing down at the end of October. Another Asian shop owner in the strip mall, who did not want to be identified, admitted that he is also struggling to survive.

Despite the hardships burdening Asian Americans, Kim says Asian stereotypes are preventing many from taking notice.

“I think it’s definitely been overlooked. I think it’s because Asians are the invisible minority. People don’t think about problems affecting Asians and that Asians are being disadvantaged. …Part of the reason is that Asians are seen as the model minority,” Kim says. “People think that Asians have made it. They have good jobs, good incomes. …And the reality is very different.”

Because some Asians have higher levels of education than the average worker, and have good incomes, people forget that there’s another segment of Asians that are less likely to go to college, Kim says.

“They’re more likely to work in very low paid jobs that are very precarious, like in nail salons or as taxi drivers or in retail.”

Vuong is concerned about a second wave of Covid-19 hurting business. He’s also worried that the outcome of the presidential election could inflame racial tensions.

“I really don’t want it to destroy my property or business. That is my [biggest] concern,” he says.

Despite the onslaught of challenges he faces, Vuong is emphatically grateful that he has been living his American dream for four decades.

Since moving to the US, Vuong graduated from Georgia State University with a degree in mathematics, became a US citizen in 1985, bought a house 1986, sent two children to college, and built up a popular Chinese restaurant.

“As a first generation coming to America, we have a dream to get a business, to have a house, to have a stable life. Have a family and then raise up kids. But hopefully our dream is not broken because of this Covid-19.”