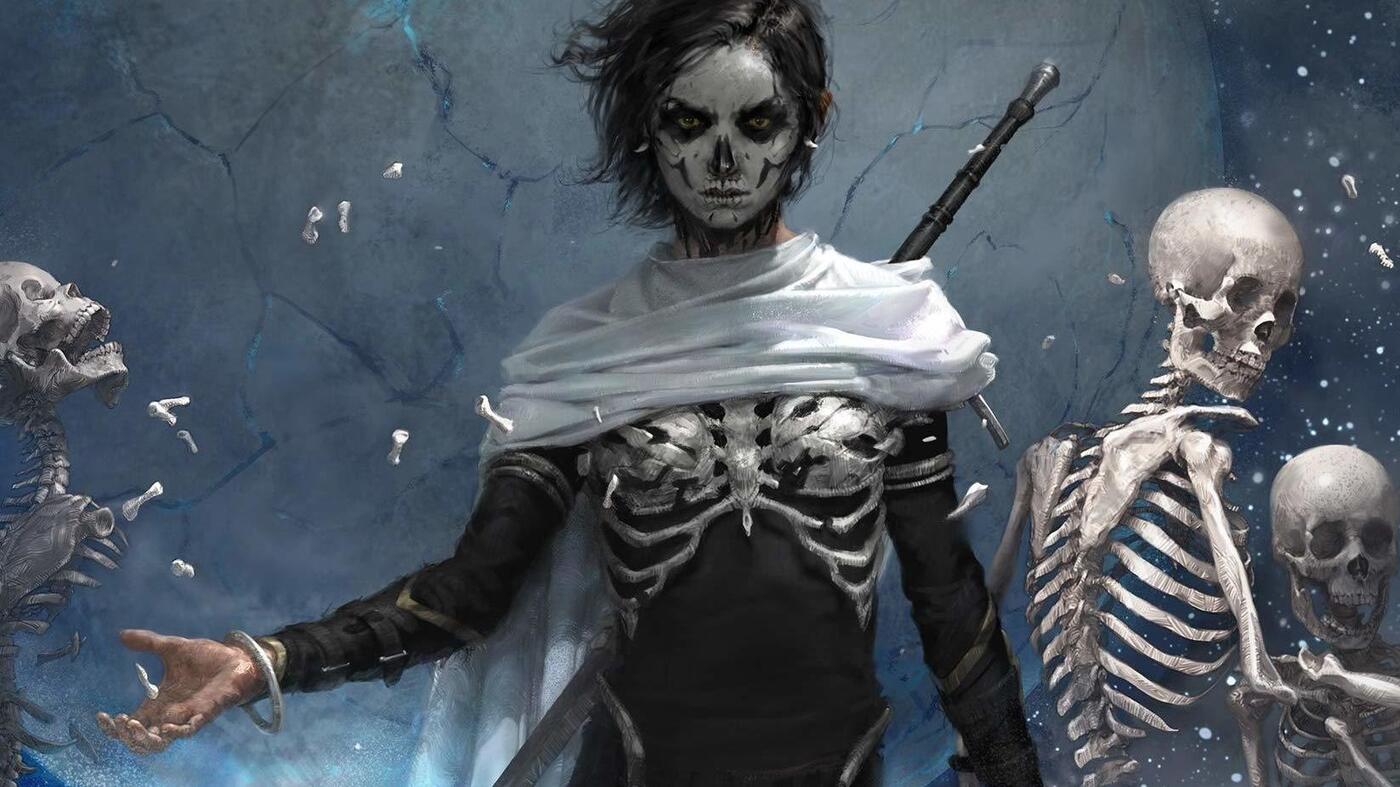 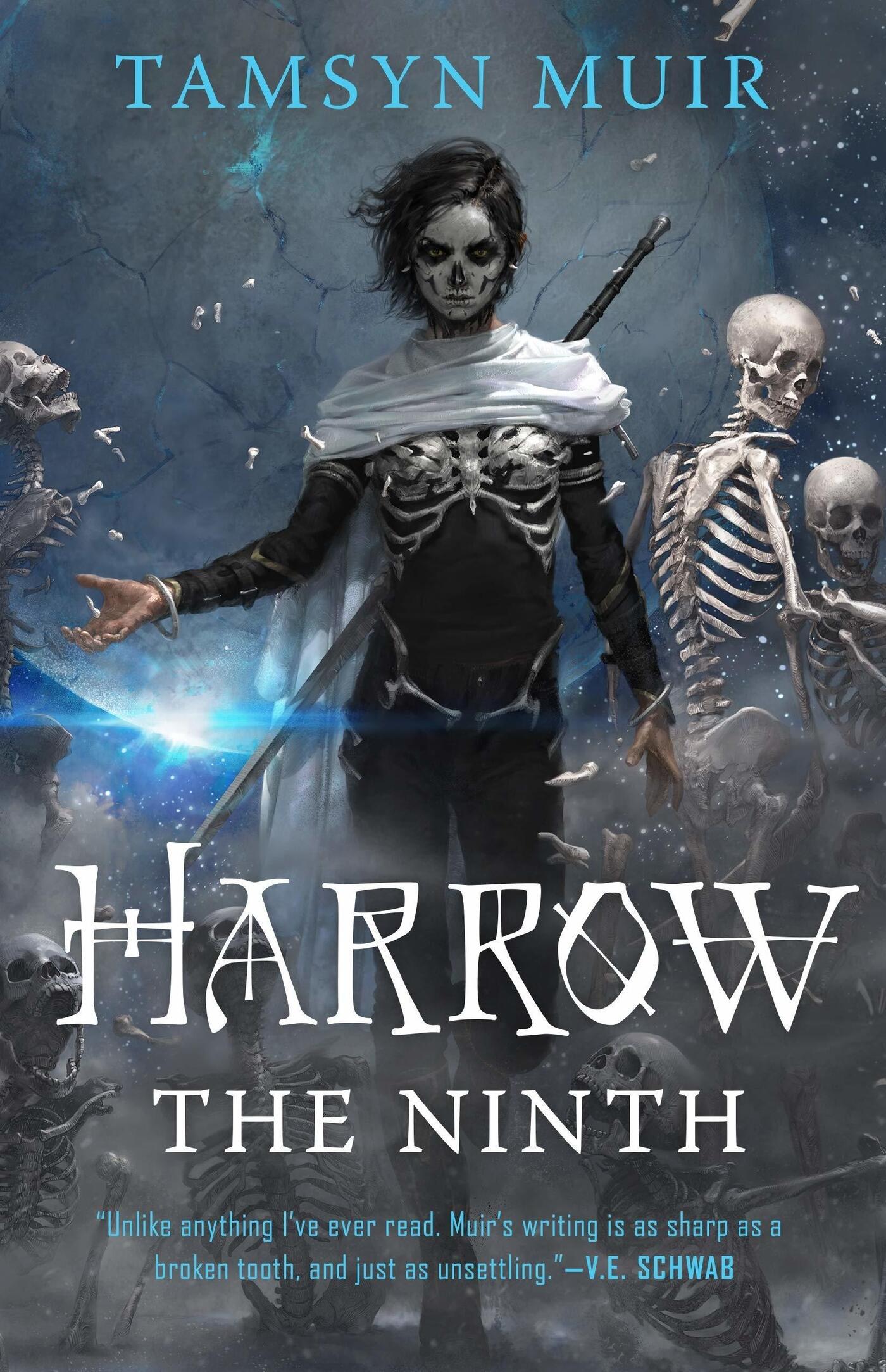 You know how sometimes people say, Oh, it’s okay. You don’t have to read the first book in this series to dive right into the second.

This is not that kind of book.

You know how sometimes people say, It’s like everything you loved about the first book, only MORE.

This is not that kind of book.

Last year, Tamsyn Muir absolutely owned the lesbian-necromancers-in-space genre. She created a crumbly, dusty, deeply haunted and wonderfully goopy horror-universe with Gideon the Ninth, peopled it with creepy, sepulchral wizards, dipped it all in the reverential tones of quasi-Catholic religious fanaticism, wrote it like a science-fantasy parlor romance full of murder and then gave it to us, still warm and dripping, like a cat bringing home a particularly juicy mouse.

And it was awesome. Seriously awesome, because the coolest thing about it was that we got to see it all and experience it all through the aviator-shaded eyes of Gideon Nav, unwilling cavalier of the Ninth House, who kicked ass, took names, always had a dirty joke handy and so loved her icy, genius Ninth House necromancer, Harrowhark Nonagesimus, that (spoiler alert) she ultimately gave her life to turn Harrow into a Lyctor — a kind of superhero bodyguard and magical ghost assassin working at the right hand of the undying God-emperor of Muir’s expansive, creaking world.

I loved Gideon. Loved everything about it. It was just so much of a book — so strange, so full, so lush, so double-bats*** crazy and so unerringly cool — that I didn’t think anything could top it.

And Harrow the Ninth, second in the series, doesn’t.

Because it is not that kind of book.

Gideon was the perfect surrogate through which to experience Muir’s creation — a brash, foul-mouthed, anarchic guide who was just as wonderstruck as we were by the gory weirdness happening at every other breath, but never so serious about it that any piece of the story felt logy with funereal detail.

Harrow is all black crepe and rosaries. She’s that one goth girl from high school gone full dark supernova with her sacramental face paint and unfathomable necromantic powers.

Harrow, though? Harrow is all black crepe and rosaries. She’s that one goth girl from high school gone full dark supernova with her sacramental face paint and unfathomable necromantic powers. A bone witch (and don’t think Muir doesn’t have some fun with that), she can construct a skeleton from a chip of tibia and have it tear your arms and legs clean off. She vacillates wildly between breathless (though exceptionally prudish) teenage passion for a corpse (that would take pages to explain), fervent prayer and drear musings on death — her own and everyone else’s. At one point, she carefully (and explosively) poisons someone with a soup made from her own bone marrow and it’s passed off like, Oh, that’s just Harry, exploding one of God’s own hit men at the dinner table, the kooky kid!

More: Harrow is brilliant. Harrow is driven. Harrow is paranoid. Harrow is special. What Harrow isn’t is fun. Gideon was fun, but Harrow is a walking trauma. The process (begun by Gideon’s death and … absorption?) meant to turn her into a Lyctor didn’t quite take, so she is weak, damaged and …

… this bit is very important …

Where ‘Gideon’ was the story of a deadly, dashing cavalier gallivanting around a spooky space mansion fighting monsters, ‘Harrow’ is about the survivor’s guilt and homicidal coping mechanisms of a moody, paranoid, hallucinating and immensely powerful teenaged necromancer.

Just sit with that a sec, will you? Because where Gideon was the story of a deadly, dashing cavalier gallivanting around a spooky space mansion fighting monsters, Harrow is about the survivor’s guilt and homicidal coping mechanisms of a moody, paranoid, hallucinating and immensely powerful teenaged necromancer so profoundly damaged by her Lyctoral transformation that her fundamental understanding of what happened in the first book (our sole historical text for finding our footing in Muir’s ghost-haunted universe) is completely shattered.

So, unreliable narrator? Yeah. But in this case so utterly unreliable that she alters our memories of what came before — which, not for nothing, is a BIG swing on Muir’s part, and one that she pulls off, not gracefully, but with devastating brute force. Because the biggest change in Harrow’s version of the past is that Gideon never existed.

Muir uses a hundred tricks to lay down the tone and temper of Harrow’s damage: messed-up timeframes, character swaps, revisionist history, secret letters, talking with ghosts, hallucination both auditory and visual, split narration that switches from a tight third-person narration in the (arguable) past — during Harrow’s version of the events of the first book — to an absolutely claustrophobic second person for her time post-transformation, while ostensibly training to defend God and the universe from some super-nasty space ghosts and, finally, a revelatory first person once Harrow’s madness begins to resolve.

It is wickedly challenging to read, deliberately impossible to comprehend in full and, frankly, I still feel like I only got about 80% of what actually happened. But there’s just something so gorgeously Baroque about it all.

And look, Harrow is long. It is fatty with a thousand adjectives, luxurious with its emotional frosting, rich with blood and meat and spattered in sanguinary body-horror. The actual plot is one-sentence simple: Harrow must overcome her damaging past to save God and fight the space monsters. But where Muir takes it is so deliciously bonkers, achingly, heartbreakingly twisted and purposefully broken that narrative barely even matters (at least up until the final few chapters, where she’s forced to grind through some truly gnarled complications in long, ill-timed conversations). It is wickedly challenging to read, deliberately impossible to comprehend in full and, frankly, I still feel like I only got about 80% of what actually happened.

But there’s just something so gorgeously Baroque about it all. So beautifully, wildly and precariously weird that I couldn’t help sliding through page after page, rolling around blood-drunk in the mess of it all, and waiting, waiting, WAITING to see how Muir would bring it all home. I hated some of the answers I got. I cheered others. And none of it was clean or easy and none of it — none of it — was what I was expecting. Because ghosts and Gods go their own way. Because weirdness breeds weirdness squared.

And because Harrow the Ninth is just not that kind of book.

Jason Sheehan knows stuff about food, video games, books and Starblazers. He is currently the restaurant critic at Philadelphia magazine, but when no one is looking, he spends his time writing books about giant robots and ray guns. Tales From the Radiation Age is his latest book.