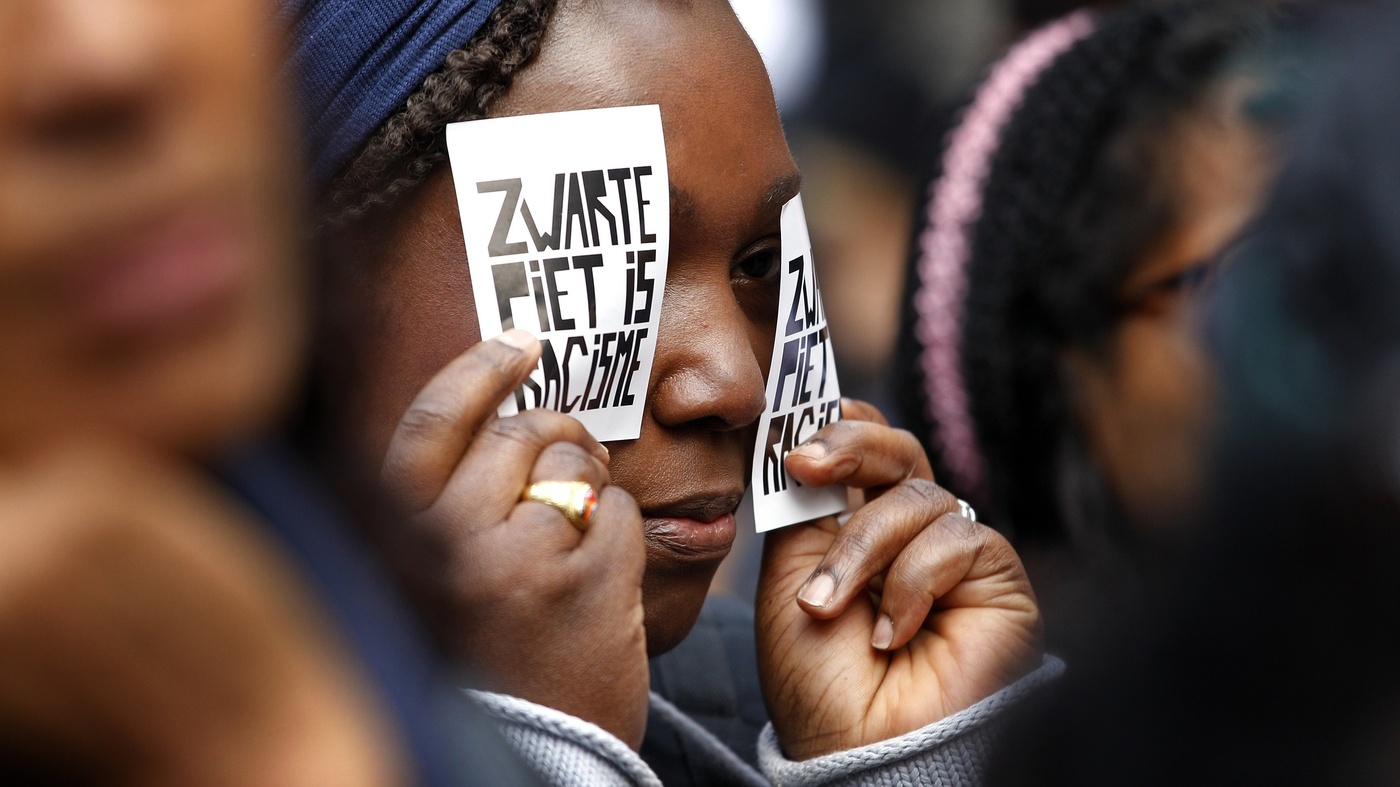 A demonstrator holds a sign reading “Black Pete Is Racism” during a 2013 demonstration in Amsterdam. Zwarte Piet or Black Pete is traditionally depicted by white people wearing blackface, Afro wigs and red lipstick. 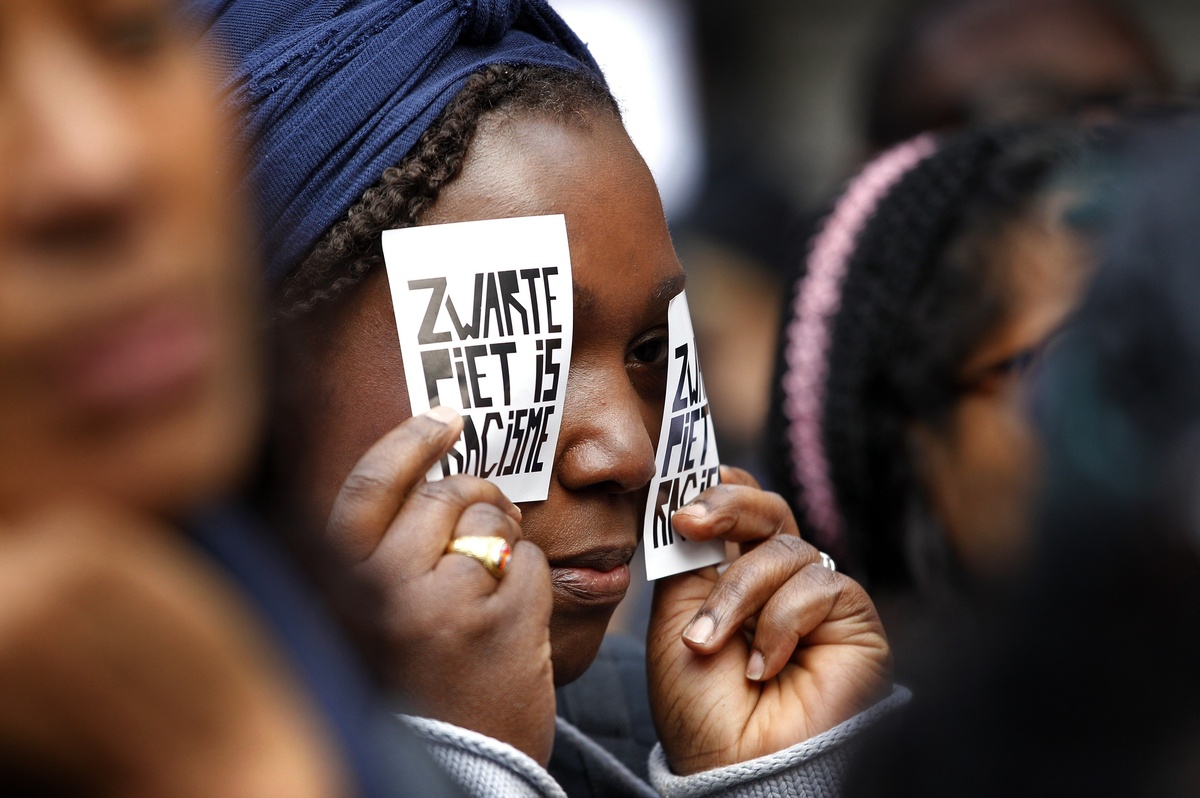 A demonstrator holds a sign reading “Black Pete Is Racism” during a 2013 demonstration in Amsterdam. Zwarte Piet or Black Pete is traditionally depicted by white people wearing blackface, Afro wigs and red lipstick.

The Dutch Sinterklaas differs from Santa Claus in a few key respects. His physique is slimmer (less paunch under the white beard), he resides not in the North Pole but in Madrid — and instead of driving a reindeer-powered sled, he travels by boat to Dutch shores to deliver presents.

And instead of relying on helper elves, Sinterklaas is assisted by a character known as Zwarte Piet or Black Pete — traditionally depicted by white people wearing blackface, Afro wigs and red lipstick.

After long defending the character and even admitting to painting his own face black in the past, Prime Minister Mark Rutte announced in June that his views on Black Pete had changed. Though he stopped short of calling for a ban, he said that societal pressure would soon force the character to retire. He also admitted that there are “systemic problems” with racism in the Netherlands.

Rutte’s announcement came in the wake of George Floyd’s killing by Minnesota police, as large crowds of protesters took to the streets of Amsterdam and other Dutch cities to demonstrate against racial injustice.

For Jerry Afriyie, who leads an Amsterdam-based advocacy organization called Kick Out Zwarte Piet, Rutte’s words were long overdue. Getting others to understand Black Pete as racist has been his mission for a decade.

Over the years, for his stance against Black Pete, Afriyie has been pelted with beer cans and bananas and targeted with death threats. Last November in The Hague, a group of masked men armed with baseball bats and fireworks tried to break up a peaceful meeting between Afriyie and fellow activists. 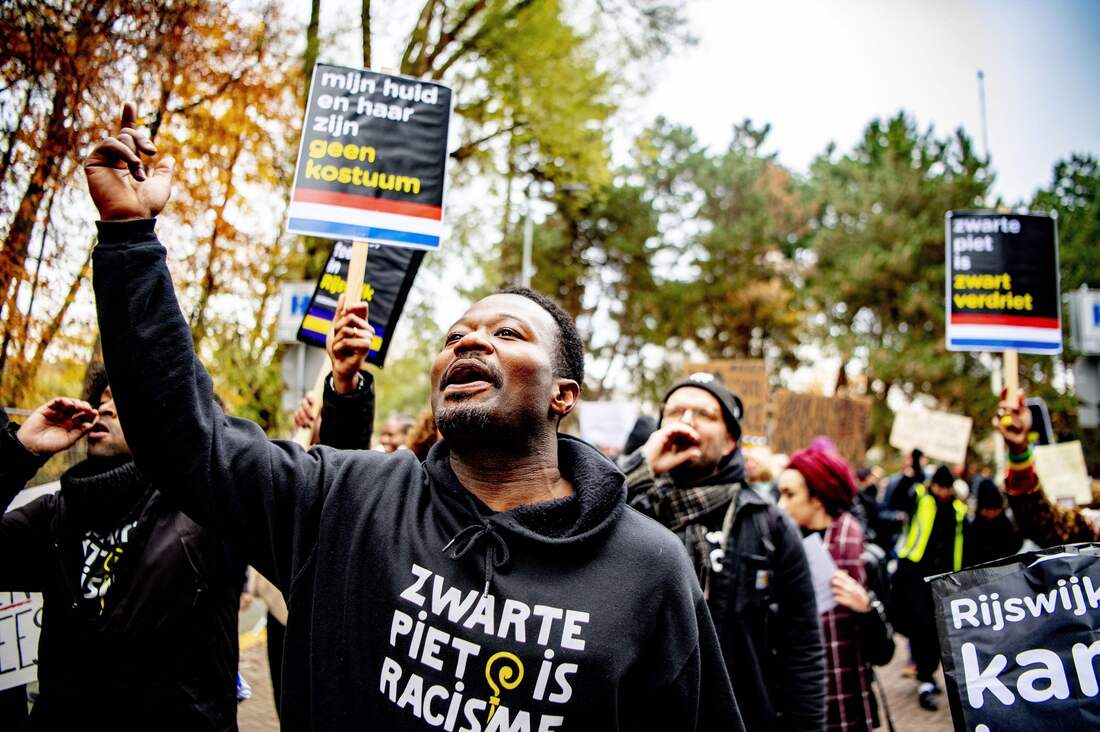 Dutch anti-discrimination activist Jerry Afriyie, leader of the Kick Out Zwarte Piet movement, demonstrates last November in Rijswijk, Netherlands, during the arrival of Sinterklaas and the blackface character who traditionally accompanies him.

Still, Afriyie (whose middle names are Luther and King) is committed to dialogue. Every Sinterklaas season, he leaves his home in Amsterdam and travels to Dutch cities and towns where Black Pete is still publicly celebrated to try to build consensus on admitting that Black Pete is racist.

Last year, committees in several Dutch cities agreed that Black Pete should not appear in their city’s Sinterklaas parades, but more than a dozen smaller towns affirmed the opposite: Black Pete would be welcome in their parades and school plays.

Many of Afriyie’s fellow activists have told him that achieving consensus on the issue of Black Pete is impossible; the country is too divided. But building consensus has a unique place in Dutch politics and society.

Some scholars say the Dutch value placed on collective action is engineered into the landscape. Much of the Netherlands would be underwater if not for a system of dikes that protects the country from flooding. The Dutch “polder model” of consensus-building takes its name from the Dutch word for land below sea level that used to be seafloor.

Former Prime Minister Wim Kok used his polder consensus-building skills to legalize same-sex marriage in 2001, making the Netherlands the first country in the world to do so.

Amma Asante, a former member of Parliament and the only woman of color to serve during her term, says the polder model means “you talk and talk and talk and talk until you reach consensus,” and it “works the best when we are able to lay aside our strongest convictions of how things should be done or how the world should look like.”

From Black Pete to Chimney Pete?

Black Pete attained prominence in the 1850s, around the time when minstrel shows became popular in the United States. The Netherlands banned slavery in its colonies in 1863, but prior to that, some wealthy families brought enslaved people from those colonies to work in their Amsterdam homes. The original costume of Black Pete, with colorful, satiny sleeves, mimicked the way the families would dress enslaved Black children.

And yet, defenders of the tradition often claim that Black Pete is simply “dirty” from coming down the chimney — he isn’t even Black. 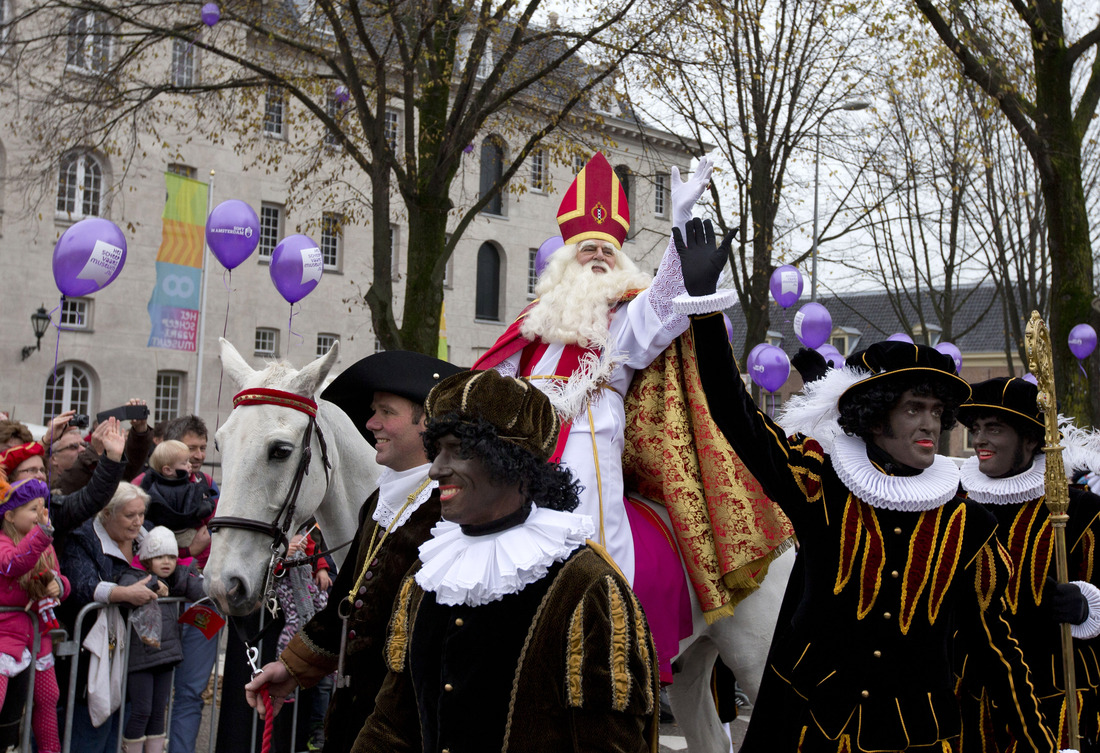 People line the road to greet Sinterklaas and his Black Pete sidekicks in Amsterdam in 2013. 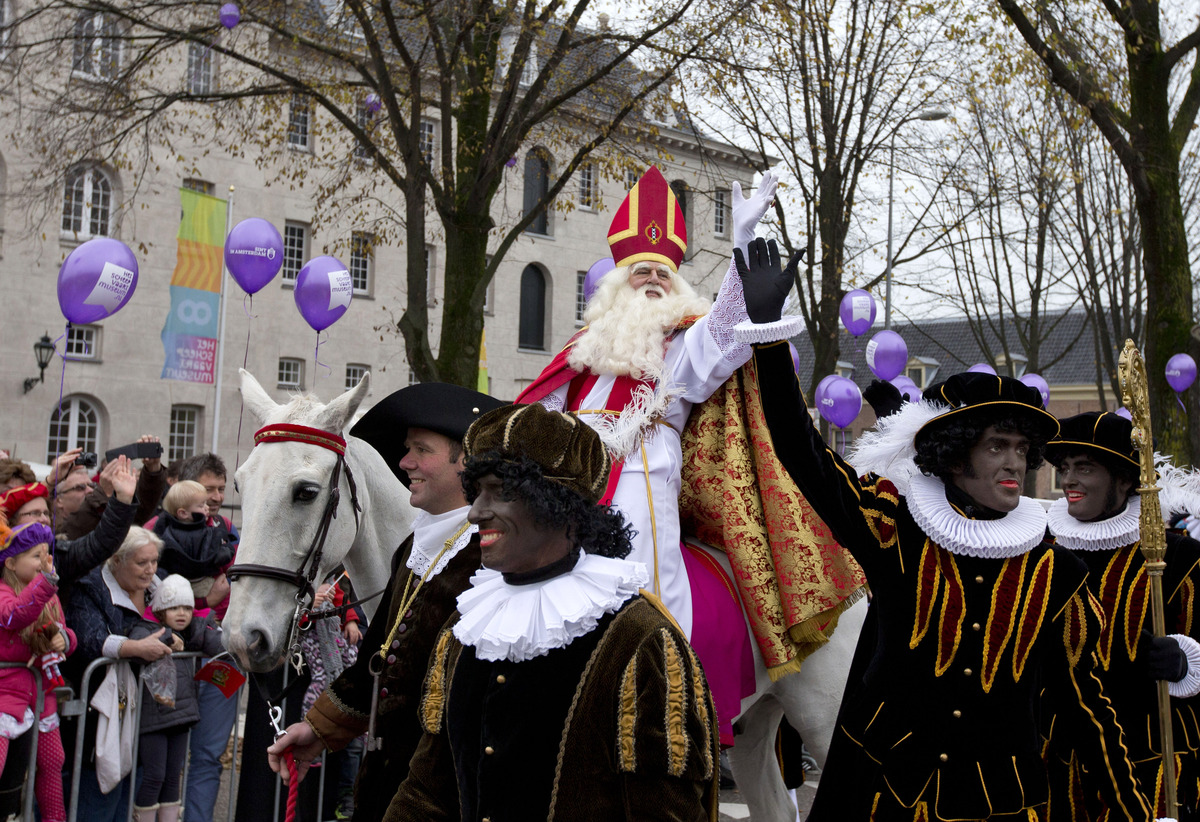 People line the road to greet Sinterklaas and his Black Pete sidekicks in Amsterdam in 2013.

Afriyie always saw the chimney explanation as a way to silence Black perspectives. He, Asante and many other Black Dutch citizens have been called “Black Pete” as an insult.

“What the country tells you is ‘Try to unsee it,’ ” Afriyie says. “Like what you are seeing is not true.”

But he came to wonder if this denial of the problem might in fact offer a solution. He started to suggest replacing Black Pete with a new character called Chimney Pete, with just a smudge of soot on his face — someone like Bert the chimney sweep in Mary Poppins.

Defenders of Black Pete hated this idea. Blackface was the tradition, they argued. But many Afro-Dutch thinkers objected as well. Gloria Wekker, author of White Innocence: Paradoxes of Colonialism and Race, says Chimney Pete was “a surface solution.” Soot or blackface, the tradition itself was tainted.

Asante admits she was doubtful that consensus-building could work when it came to racism, and she was surprised when she saw large crowds gather in the Netherlands this spring in support of the Black Lives Matter movement. If not for all those years of “poldering” and engaging in dialogue about Black Pete, she wondered if the killing of George Floyd would have started a conversation about racism in the Netherlands.

“There’s quite a risk that we could have said, ‘Oh, that’s in the United States. That’s not us,’ ” she says. “And now there’s no denial anymore.”