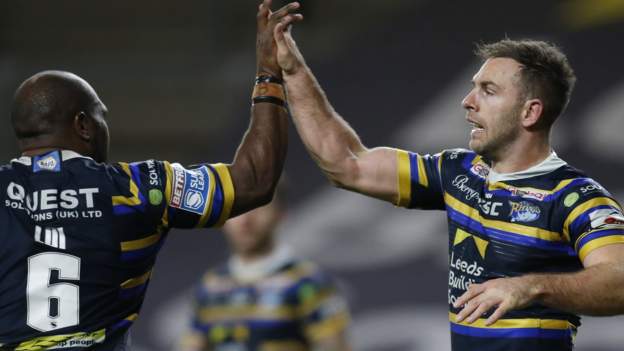 Luke Gale helped Leeds overcome Castleford with a try against his former side after Oliver Holmes was shown a first-half red card.

Holmes was sent off in the 30th minute after he lashed out at Richie Myler.

While Gale put Leeds ahead against the 12-man Tigers, two Greg Eden tries either side of the break put the visitors 18-12 up.

Victory leaves Leeds fifth in the table and just behind Catalans Dragons on points percentage, although the Yorkshire side have now both played and won more games than their French rivals who had their Super League game against Warrington on Monday postponed because of a spike in Covid-19 cases at the club.

Leeds were at near full strength after a majority of the Challenge Cup-winning squad was rested in their heavy Super League defeat by St Helens just three days earlier.

Myler, who collected the Lance Todd Trophy for his inspired exploits at Wembley a week earlier, was among the stars of the final to be recalled by boss Richard Agar.

His first involvement against Tigers, however, was disastrous as he spilled a high ball close to the Leeds line, allowing Castleford to open the scoring with Liam Watts getting on the end of a fine Danny Richardson grubber kick.

The lead lasted just 10 minutes, with Seumanufagai barging over after Castleford did well to resist Konrad Hurrell from close range.

The visitors were reduced to 12 men with 50 minutes remaining when Holmes sparked a melee after shoving and kicking out at Myler as he attempted to play the ball.

Gale dived over to edge Leeds ahead soon after, but an atrocious high kick from forward Cameron Smith after the half-time hooter sounded allowed Eden to collect the ball and race 70 metres to level the scores at the interval.

Eden then gave Castleford the ideal start to the second-half, producing a sensational finish in the left corner, and while the Tigers did well to resist long periods of Leeds pressure three late scores from Sutcliffe, Briscoe and Martin ensured a hard-fought victory against a Tigers side that remain ninth in the table.