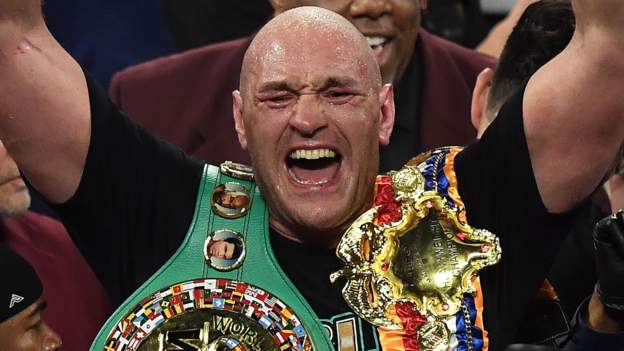 WBC world heavyweight champion Tyson Fury says he will fight in London on 5 December against an opponent who will be named “very, very soon”.

This month the Briton, 32, said he had “moved on” from facing Deontay Wilder for a third time in December and would instead be “coming home” to fight.

Fury’s most recent fight was winning the WBC title from Wilder in February following their draw in 2018.

“Can’t wait to get back in the ring and get back to what I do best,” said Fury.

Compatriot Anthony Joshua will attempt to defend his IBF, WBA and WBO world heavyweight titles against Bulgaria’s Kubrat Pulev on 12 December at The O2 in London.

“I would just like to announce that I am definitely fighting December 5 in London, opponent to be announced very, very soon,” Fury said in a video posted on social media.

“Just working on some opponents and will let you all know who it is going to be shortly. Watch this space.”

Fury has not competed in the UK since August 2018, with his lpast four bouts taking place in the US.

His third bout with Wilder was slated for July this year and later aimed at October before plans emerged for a December fight in the US.

“I agreed to 19 December,” Fury said this month. “Then they tried to change the date again into next year.”

Fury told The Athletic: “I’ve been training. I’m ready. When they tried moving off 19 December and pushing to next year, enough was enough. I’ve moved on.”