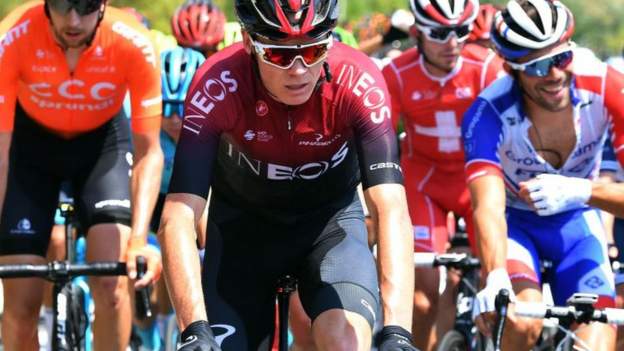 Chris Froome finished almost one minute behind the leaders as his Tour de France preparations began with the first stage of the Route d’Occitanie.

Froome, the four-time winner who suffered a serious crash last summer, is bidding to return to form in time for the start of the Tour on 29 August.

He faces competition for selection for Team Ineos from team-mate Egan Bernal.

The 23-year-old Colombian came sixth in a sprint finish in France as Coquard took the opening stage from Elia Viviani and Sonny Colbrelli.

The Frenchman completed the 187km route from Saint-Affrique to Cazouls-les-Beziers in four hours 35 minutes.

The second of four stages begins in Carcassonne on Sunday.

Froome, 35, is set to leave Team Ineos at the end of the season after they decided not to renew his contract.

The Vuelta a Burgos was the first major stage race to take place since March because of the coronavirus pandemic.