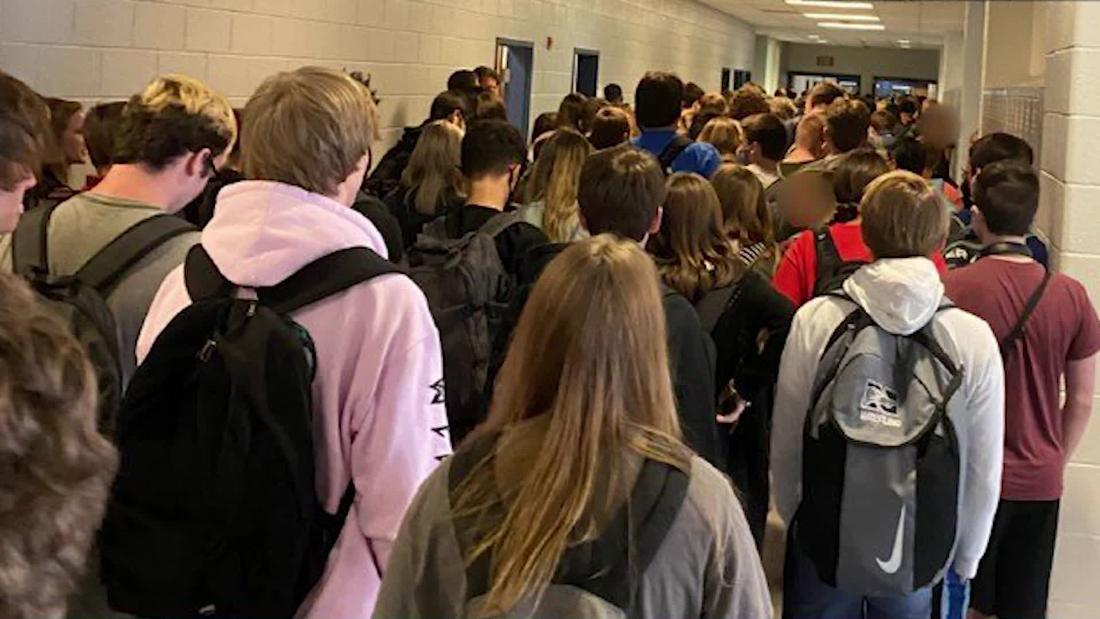 This issue became a flashpoint this week after sophomore Hannah Watters was disciplined for posting a photo on Twitter showing many of her fellow North Paulding High School classmates in Dallas, Georgia not wearing masks while walking down a crowded hallway. The photo was posted on Twitter at the end of dismissal, Watters said.

“I took it mostly out of concern and nervousness after seeing the first days of school,” she said. “I was concerned for the safety of everyone in that building and everyone in the county because precautions that the CDC and guidelines at the CDC has been telling us for months now weren’t being followed.”

Watters, who also shared a video showing what dismissal looked like at the end of a school day, was suspended for five days for violating several parts of the school’s code of conduct, she said. Those violations included using a cell phone during school hours, using social media during school hours and violating student privacy by photographing them, she said. The school reversed the suspension on Friday; Watters can return to class on Monday, she added.
What happened to Watters can befall other students as the pandemic persists and schools reopen around the US, said Mike Hiestand, senior legal counsel for the Student Press Law Center. The center is a non-profit organization that works to support and defend the First Amendment and press freedom rights of high school and college journalists and their advisers.

“I’ve little doubt that these sorts of conflicts are going to dominate my life over the next many months,” Hiestand told CNN. “People tend to assume that most censorship issues involving student journalists concern stories about sex, drugs and rock and roll sort of stuff. Not true. By far the most common targets for censorship are accurate, lawful stories that school officials believe cast the school in a negative light. Student stories showing their school’s response to Covid has censorship written all over them.”

There is no expectation of privacy in a crowded public school hallway, Hiestand said. As such, there’s no reasonable claim that these sorts of photos are violating anyone’s legal right to privacy, particularly now when the lead headline of many news organizations has to do with students returning to school during a global pandemic, he added.

Watters’ photo “is about as newsworthy — and therefore, non-private — as it gets,” Hiestand said.

The First Amendment and what it means to students

The freedom of speech protection afforded by the First Amendment applies to people of any age and, thanks to the Supreme Court, that unequivocally includes students.

The Supreme Court has famously ruled that students do not shed their First Amendment rights at the schoolhouse gate, and that holds true today as much as it did in 1969, said Roy Gutterman, an attorney and director of the Tully Center for Free Speech at Syracuse University’s Newhouse School.
In the case of Tinker v. Des Moines Independent School District, the Supreme Court ruled in 1969 that Iowa public school officials had violated the First Amendment rights of several students after suspending them for wearing black armbands protesting the US involvement in Vietnam, according to the Middle Tennessee State University Free Speech Center’s website.

The court determined that school officials could not censor student expression unless they can reasonably predict that the expression would cause a substantial disruption of school activities, the center said.

When it comes to cell phones and whether they are a disruption, administrators can impose reasonable restrictions such as not using them during school hours but a principal cannot legally control what students post on social media off campus or after hours, though these attempts are seen from time to time, Gutterman said.

“It would be unreasonable to punish students who are exposing misbehavior or other problems during this public health crisis. If a student exposes something like this, the student is more akin to a whistleblower or public critic and should be praised rather than punished,” Gutterman added.

The threat of Covid-19 infections in schools is real

Zach Parsons is a sophomore at North Paulding High School who said it’s dangerous for schools to have in-person instruction. He’s not wrong, particularly when it comes to students in Georgia.

Teachers gathered outside of Gwinnett County Schools this week in their cars honking in protest over reopening schools. As of Wednesday, there were 28 confirmed and 67 suspected cases of Covid-19 among employees of Gwinnett County Public Schools, according to the district. The district has identified 168 close contacts of those people, resulting in a total of 263 employees impacted by either a positive test result or quarantine, it said.
In Georgia’s Cherokee County School District, at least 260 students and eight teachers were quarantined after several individuals have tested positive for Covid-19 during the first week of school. The district returned to in-person learning on Aug. 3.
This trend has extended beyond Georgia. Students in Mississippi and Indiana have tested positive for Covid-19 after school districts reopened.

At North Paulding High School, following Watters’ photo, around 40% of students were seen wearing masks, Parsons, the student, said. In a letter to the community this week, Paulding County Superintendent Brian Otott said “Wearing a mask is a personal choice, and there is no practical way to enforce a mandate to wear them.”

For any students concerned about their health and who are facing circumstances like in North Paulding High School, Hiestand of the Student Press center has two words of advice: be brave.

“Use the new speech tools that are available to say what you need to say,” Hiestand added. “As John Lewis said a month before he died: ‘And to see all of the young people…standing up, speaking up, being prepared to march. They are going to help redeem the soul of America and save our country and maybe help save the planet.'”