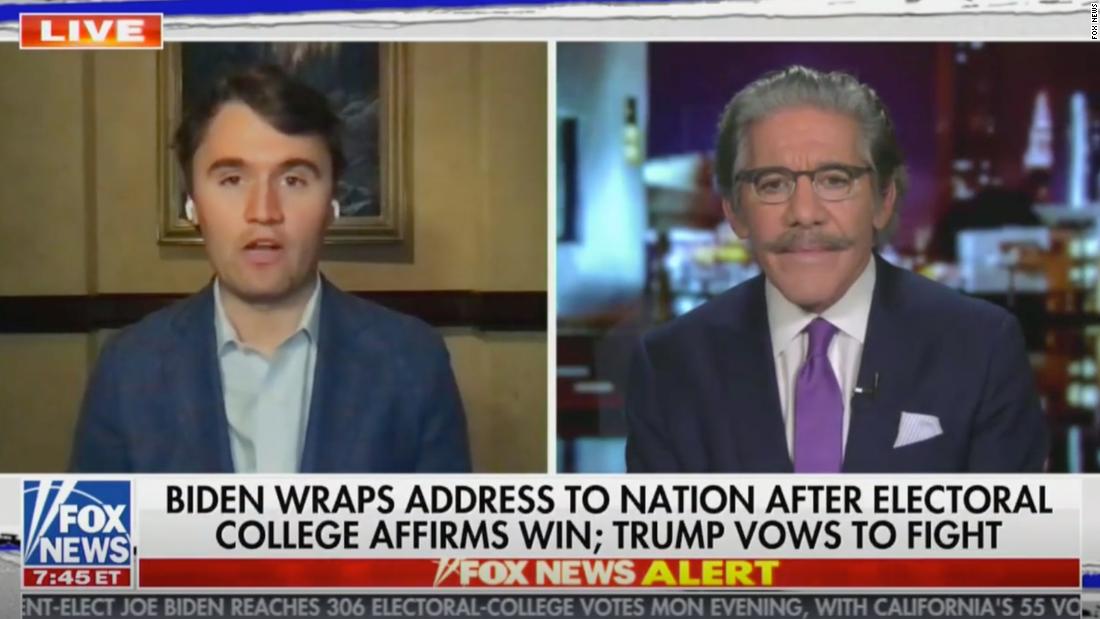 During a segment on “The Story With Martha MacCallum,” Fox News host Martha MacCallum asked Rivera and Turning Point USA founder Charlie Kirk to share their thoughts on President-elect Joe Biden’s Tuesday night speech after the electoral college officially submitted their votes.
“He is absolutely right. It’s over,” Rivera said, nodding to Biden’s speech that focused on moving forward. He added that he wants President Donald Trump to “understand it is over.”
Kirk, who leads the right-wing college activism group, wasn’t willing to concede that fact. In defense of Trump and his legal team’s efforts to overturn the results of the election, Kirk said Trump supporters still have “very good questions” about the election results.

“There are still plenty of pending legal challenges,” Kirk said. “There are hundreds.”

“That’s so dishonest,” Rivera quickly chimed in. “You have to stop this.”

Trump’s cases have been litigated for six weeks, Rivera pointed out, adding that the Supreme Court has rejected Trump’s efforts twice.

“The President of the United States Donald Trump can end the post-election turmoil. The nation is rattled. We are divided. The government is in disarray,” Rivera said in a call-to-action video posted to his Twitter account on Tuesday morning, less than 24 hours after the on-air spat with Kirk. “President Trump must concede. The electoral college has spoken. They voted yesterday, as you know, for Joe Biden.”

This isn’t a new stance for Rivera. On November 11, four days after most major news outlets declared the race for Joe Biden, Rivera tweeted, “Dear @realDonaldTrump-my honored friend-you fought an incredible battle vs all odds and the curse of insidious disease. You battled the back stabbers & our enemies & remade the world in peace & prosperity. You came so close. Time coming soon to say goodbye with grace & dignity.”