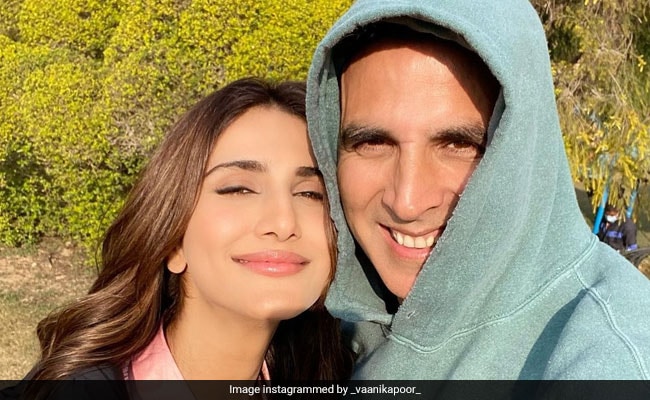 Akshay Kumar is a “wonderful” actor and Vaani Kapoor’s latest post on Instagram proves it. The actress, who co-stars with Akshay Kumar in their forthcoming film Bell Bottom, shared a sun-kissed picture of themselves on Wednesday and accompanied it with a heart-warming note for the 53-year-old actor. Team Bell Bottom wrapped the film’s shoot in October. The cast and crew shot the film during the pandemic. “How wonderful are you, Akshay sir, you’ve made this journey so much more special for me, will miss your fun self…until we meet again,” wrote Vaani Kapoor in her special note. The photo features the co-stars smiling with all their heart.

Bell Bottom has been shot in London and Glasgow. It is Bollywood’s first film that has been shot at an international location after the nationwide lockdown. In October, after completing the film’s shooting schedule, Akshay Kumar posted a picture with Vaani Kapoor and wrote: “Mission accomplished! After a long but fruitful schedule, grateful to have shot and completed #Bellbottom during the pandemic. Now it’s time to head back #JetSetGo.”

Vaani Kapoor, who made her debut in Bollywood with Yash Raj Films’ 2013 film Shuddh Desi Romance, has worked in a number of films such as Befikre, Aaha Kalyanam and War. The actress will next be seen in Karan Malhotra’s Shamshera along with Ranbir Kapoor and Sanjay Dutt and in Abhishek Kapoor’s Chandigarh Kare Aashiqui.

Akshay Kumar, last seen in Laxmmi, has a couple of films lined up such as Prithviraj and Atrangi Re.