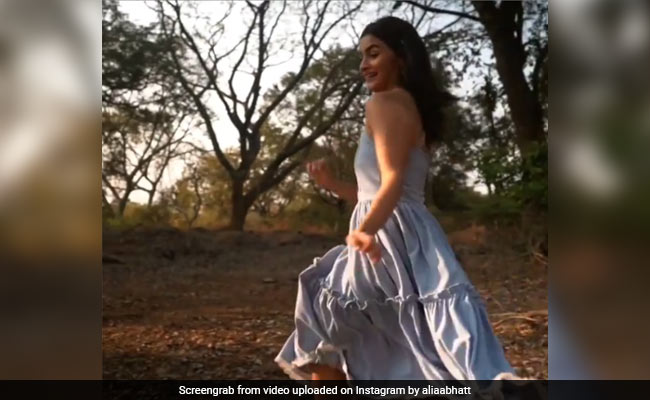 Alia Bhatt in a still from the video. (courtesy aliaabhatt)

If you wish to jump into Alia Bhatt’s childhood, all you have to do is watch her latest Instagram entry. No, it is not a throwback from her childhood days but one is never too old to embrace the child within, right? Well, that’s exactly what the actress did in her video. Alia, on Monday evening, shared a happy video, in which she can be seen making the most of her me time. She can be seen twirling, smiling and was joined by two kids in the video. She summed up the essence of the video perfectly when she wrote: “Childhood! A time when the world feels like your playground.”

Take a look at the video here:

Earlier, Alia Bhatt posted a picture with Karan Johar’s new book The Big Thoughts Of Little Luv and she wrote: “A quick read before I head out to shoot, my favourite thing to do even as a child – getting lost in a book…fascinated by the colours and characters! Karan Johar, congratulations… Another feather in your cap. This one is all love.”

Alia Bhatt recently delighted her Instafam with a picture of her cat Edward. “My muse,” she captioned the post. Alia’s mom and veteran actress Soni Razdan commented: “Aww. He’s looking rather loved and happy.” ICYMI, check out the post here:

Alia Bhatt was last seen in Sadak 2, co-starring Aditya Roy Kapur, Sanjay Dutt and Pooja Bhatt. The film released on OTT platform Disney+Hotstar on August 28. It was one of the seven big films to release on the streaming platform. It is a sequel to Mahesh Bhatt’s 1991 hit Sadak.

The actress’ upcoming projects include Ayan Mukerji’s fantasy trilogy Brahmastra, co-starring Ranbir Kapoor and Amitabh Bachchan, and SS Rajamouli’s RRR. She will also be seen in Gangubai Kathiawadi, which will be directed by Sanjay Leela Bhansali.

‘Drug Use For Grown-Ups’ Serves As An Argument For Personal Choice : NPR

A Pic Of Madhuri Dixit “Growing Strong” In Her Cocoon