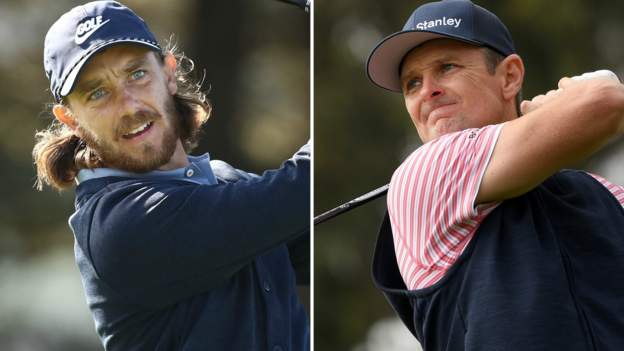 Tommy Fleetwood carded the joint-lowest round of the 2020 US PGA Championship to move into contention going into the final two rounds in San Francisco.

The Englishman, 29, shot a six-under 64 to sit two shots behind China’s Li Haotong, who took the lead with a five-under 63 at TPC Harding Park.

After carding a 67, compatriot Paul Casey is a shot further back with Brendon Todd, the joint overnight leader with Day, and Cameron Champ, who matched Fleetwood’s low mark of 64.

Rory McIlroy and Tiger Woods both had mixed rounds but will make the cut, with McIlroy one-under after a 69 while Woods is level par after a 72.

Early starters shake it up

Li said that before the championship he told his caddie he wanted to come in with “no expectations”. Given his record this year, no wonder.

The 25-year-old has missed the cut at four of the eight events he’s played this year. His best finish has been a tie for 18th at the Oman Open and he was tied for 75th at last week’s WGC-FedEx St Jude Invitational, which saw him drop to 114 in the world.

But opening with a three-under 67, he raced out of the blocks on day two. Li claimed five birdies from his first 10 holes to charge into the lead, before seeing out a bogey-free round.

And that was despite hitting just four fairways. Perhaps that’s why he was back on the practice range hours after his round.

Tommy Fleetwood was another early starter who made a statement of intent. After having to settle for level par on day one, the world number 13 made virtually every opportunity count.

The 29-year-old claimed seven birdies to thrust himself firmly into contention heading into the weekend as he aims to become just the second Englishman to win the US PGA.

A stunning final round of 63 by Fleetwood had Koepka looking over his shoulder as he finished second to the American at the 2018 US Open and he was runner-up to Ireland’s Shane Lowry at the last major 13 months ago, the Open. Could this be Fleetwood’s time?

“I’m not going to say I’m playing the best I’ve ever played, or I feel the sharpest I’ve ever felt,” he said. “But it’s a major championship and I’ve just shot a good score, so I can’t be far off.”

I told my caddie ‘no expectations’ – what they said

Li Haotong: “I didn’t even think I could play like this this week, I’d got no confidence. I said to my caddie ‘no expectations’. I wanted to play without stress.

“That’s the key – just to play golf and try to get the win. We’ve still got two rounds left – long way to go. I just want to play my best. If it happens, it happens.”

Tommy Fleetwood: “Yesterday I had a decent score going then had a bad couple of holes. But level par wasn’t a bad score. I feel like my game is improving day by day, and today I hit a lot of good golf shots.

“With the wind, an average shot actually becomes a good one. I hit a lot of fairways and that makes it easier around this course.”