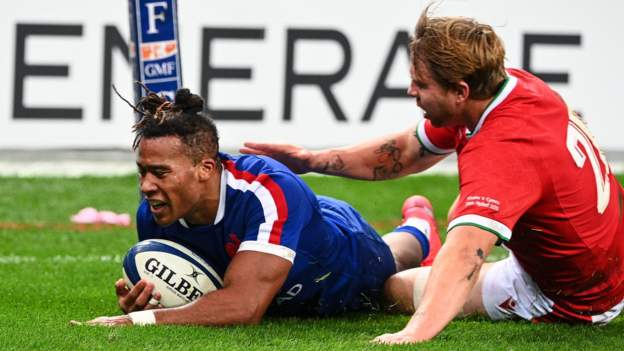 France scrum-half Antoine Dupont inspired his side to victory over Wales in a Six Nations warm-up match behind closed doors in Paris.

Leigh Halfpenny scored a try for Wales inside the opening minute as the visitors built an early 10-point lead.

But it was a fourth successive defeat for Wales under head coach Wayne Pivac.

France lock Bernard le Roux was lucky to avoid any sanction for an apparent forearm to the face of Alun Wyn Jones.

So Wales could not find the win to mark the 148th world record equalling Test appearance of captain Jones, who drew level with New Zealand former skipper Richie McCaw.

This Welsh defeat followed Six Nations losses against Ireland, France and England, with only one win in the last seven internationals.

On the final weekend of the delayed Six Nations, Wales host Scotland, England travel to face Italy, while France will be home against Ireland.

France, Ireland and England can still win the tournament next week, while Wales and Scotland will be battling it out for fourth place.

This was the 100th match between France and Wales since the opening contest in 1908 and it had been 231 days since Pivac’s side last played, against England at Twickenham.

It was just over seven months since Wales were due to finish their Six Nations campaign against Scotland in Cardiff before the coronavirus crisis saw that fixture postponed.

So we had the unusual circumstances of a friendly against France as a warm-up ahead of a Six Nations tournament finale in October.

The match was played behind closed doors at the vast Stade de France arena in Paris, a city under night-time curfew hosting opponents from a country in lockdown.

Both sides were strong and close to the Six Nations line-ups in Cardiff in February, when France won 27-23.

Wales made seven changes from the team which had been due to start against Scotland in March.

Centre Davies was back for his first game since November 2019 after recovering from a knee injury, while scrum-half Rhys Webb started an international for the first time in almost three years.

French players will only be allowed to play a maximum of three matches each during the six-game autumn campaign, after the French Rugby Federation and the French league came to an agreement last week over player availability away from club duty.

It was thought France might be more battle-hardened thanks to more domestic action, but it was Wales who took the stunning early initiative.

Wales scored within 58 seconds with full-back Halfpenny coasting over following a well-worked move, including a beautiful long pass from flanker Justin Tipuric.

Biggar was given the kicking duties instead of Halfpenny and slotted over the touchline conversion. The Northampton fly-half added a penalty before suffering a leg injury but managed to continue.

France responded with a scything break from half-backs Ntamack and Dupont and a last-ditch tackle from Adams could not stop the French momentum and Baille diving over. Ntamack converted before Biggar responded with his second penalty.

France demonstrated their attacking brilliance with an outrageous offload from Vakatawa, allowing Thomas to provide the try-scoring pass to Dupont with Ntamack converting to give the hosts the lead.

Vakatawa again proved the catalyst with a clever inside pass to Dupont for his second try in four minutes, which Ntamack again improved to give France a 21-13 half-time lead.

Biggar missed two penalty attempts and the chance to put Wales within a score and France punished the visitors with a Dupont break and Ollivon score.

Wales immediately responded with a try from replacement prop Nicky Smith before a magical moment from France wing Thomas completed the scoring as he collected his own deft chip-kick.

Wales head coach Wayne Pivac: “It was certainly a game we needed and you could see that with the mistakes we made.

“We didn’t have our best day in the air. There are a lot of sore bodies in the changing room and plenty to work on.

“We started well but let the French back in with our errors. We need to start well against Scotland next week and push on.”