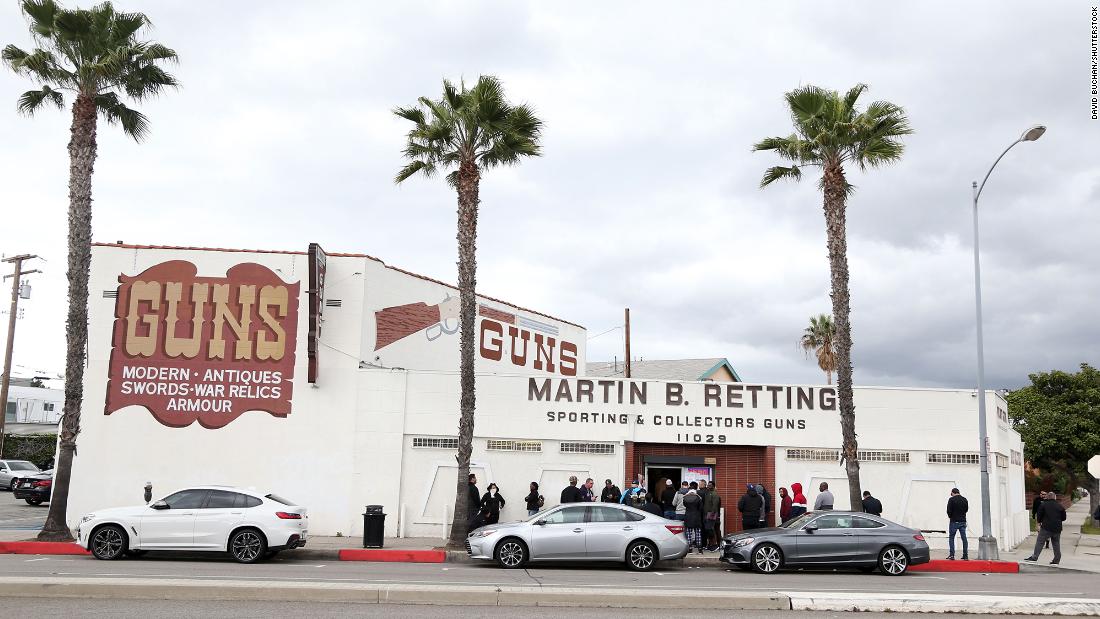 Gun retailers and industry analysts say its normal for Americans to stock up on firearms and ammo during an election year. In many cases, the analysts say, the surge is motivated by fears that a Democratic president might expand restrictions on gun ownership.

But this year’s sales spike is different because it’s being driven by a rise in first-time gun buyers, especially among African Americans and women.

About 40% of gun sales in the first four months of the year were made by first-time buyers — far higher than the annual average of 24% over the past two decades, according to the National Shooting Sports Foundation, a trade association that tracks gun sales and analyzes industry trends.

Gun sales among Black Americans are up 58% through September, according to the NSSF. Mark Oliva, the foundation’s director of public affairs, said the rise in Black gun ownership is unprecedented.

“We’ve never seen a year-over-year increase that large in African-American gun buyers,” Oliva told CNN Business. “It is the largest demographic increase we’ve seen. People that are buying guns today look a whole lot less like me and a whole lot more like the rest of America,” added Oliva, who is White.

Gun merchants and advocacy groups have noticed the trend as well.

‘I have a family to protect’

Douglas Jefferson, vice president of the National African American Gun Association, an advocacy group, says his organization has seen a major jump in membership that began around March when the Covid-19 lockdowns began.

Before the pandemic, Jefferson says, his organization, which promotes responsible gun ownership and training for Black Americans, had about 30,000 members nationwide. Since then, about 5,000 new members have joined.

“People are worried about people stealing from other people, breaking into homes,” Jefferson told CNN Business. “That was on top of the civil unrest that you’ve seen this summer, the demonstrations and some of the riots that you’ve seen.”

Jefferson said fears of violence by White supremacists and police have also been a major concern for his members, especially following the fatal shooting of Ahmaud Arbery in April, as well as the police killings of Breonna Taylor, George Floyd and Rayshard Brooks.

“It just seems we’ve had a lot more high-profile incidents where White supremacists have caused harm to Black people,” Jefferson said. “There’s a greater awareness of it and concern for it and people wanting to protect themselves and their families against it.”

New gun owner Luther Thompson, 41, of Cartersville, Georgia, says he joined NAAGA during the spring not long after purchasing his first firearm. The divorced father of five says both pandemic-related crime and Arbery’s killing weighed heavy on his mind, motivating him to obtain a concealed carry license and buy his first gun.

Since then, he’s purchased four additional firearms and persuaded his ex-wife to get her own handgun and license to carry a concealed firearm.

“I have a family to protect,” Thompson told CNN Business. “You have people out here who are ignorant to the point where your life doesn’t mean anything to them. … It’s getting bad out here. You have no choice but to protect yourself.”

Thompson said fears of post election civil unrest have also compelled him to stock up on guns, as well as ammunition, which has been out of stock in many stores across the country.

‘Our instructors, they’re being overrun’

Sales to women are also up 40% through September when compared with the same period last year.

Oliva of the NSSF says the biggest sales increases have come from states that have stricter gun control measures in place.

“There are segments of our societies that haven’t been traditional gun buyers, more liberals, more Democrats,” Oliva said.

Retired police officer and professional markswoman Dianna Muller is the founder of the DC Project, an advocacy group that trains women to use firearms. She says the instructors she works with across the country have been adding classes to their schedules to keep up with the increased demand from female first-time gun buyers.

“Our instructors, they’re being overrun,” Muller told CNN Business. “They can’t keep up with the amount of requests.”

Another DC Project leader and instructor, Kelly Pidgeon, 53, of Pennsylvania, says the women who have taken her classes this year are concerned for their safety.

“They have been watching what has been going on in terms of rioting, looting, defunding police, police not being available to them and they’re afraid,” Pidgeon told CNN Business. “They understand they need to become their own first protector because dialing 911 does not mean anyone shows up at your doorstep.”

‘A year unlike any other’

“This is a year unlike any other. It’s unparalleled,” Oliva added. “”I’ve stopped using the word unprecedented. It’s losing its power.”