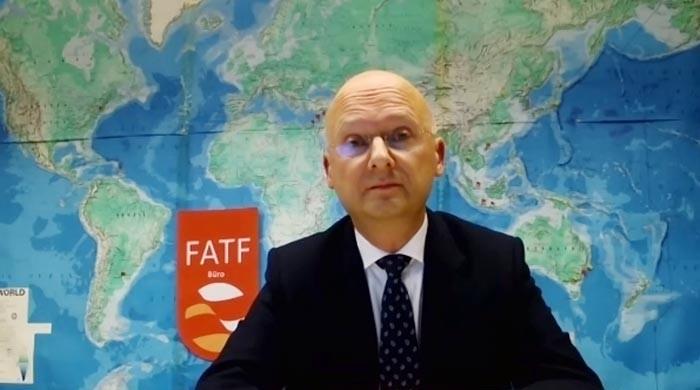 FATF President Dr Marcus Pleyer, addressing a webinar to announce the decisions taken by the plenary in its three-day meeting period from October 21 to 23, said that the forum has decided that Pakistan “needs to do more” when it comes to fulfilling the requirements set out by the task force.

It was acknowledged that of the 27 conditions that were put forth to Pakistan, 21 have been fulfilled.

To a question, Dr Pleyer said that once the remaining six conditions are fulfilled, an “on-site visit” will be approved under which a team from the FATF will visit the country for the next review.

“Our discussions are confidential […] the members decided by consensus that Pakistan needs to complete these six items for an on-site visit to be granted.

“As soon as the plenary decides that Pakistan has completed all the 27 items, then an on-site visit will be made. After that, it will be decided whether the country will be allowed to exit the grey list or not.”

He said that the new deadline for Pakistan to fulfil the remaining conditions is February 2021 when the next plenary meeting will take place.

“As long as Pakistan can be seen progressing and fulfilling the requirements, it will be given a chance. There are some countries which are not making progress and have been placed on the black list,” said Dr Pleyer.

Meanwhile, two countries — Iceland and Mongolia — were removed from the FATF’s “black list”.

Reacting to the decision, Minister for Industries and Production Hammad Azhar said that Pakistan has “achieved impressive progress” on its FATF action plan.

He said that 21 out of 27 action items “now stand cleared” and the remaining 6 are “partially complete”.

Azhar, who previously held the portfolio of Minister for Economic Affairs, said that “within a year”, Pakistan has progressed from 5/27 to 21/27 completed items.

The minister said that discussions in the lead up to the decision “remained focused on how Pakistan can be facilitated” for the upcoming evaluation, due mid next year.

“I congratulate our federal and provincial teams who have worked day and night even during the pandemic to ensure this turn around,” he wrote.

The plenary was earlier scheduled in June but got postponed due to the COVID-19 pandemic.

In February 2020, the FATF plenary granted Pakistan a grace period of four months to complete its 27-point action plan against money-laundering and terror financing (ML&TF) after it noted that the country was compliant on 14 points.

Pakistan was placed on the grey list in June 2018.

Pakistan was hopeful of positive outcome

The authorities were hopeful of a positive outcome after the country enacted at least 15 pieces of legislation, many of them through a joint sitting of Parliament, to fulfil the requirements set by the international watchdog.

They were confident that there are “minimal chances” of Islamabad being placed on the blacklist, the report said.

“Pakistan’s case will be discussed on October 23, 2020 at FATF’s plenary meeting and our efforts will not go waste,” one top government official said on the condition of anonymity on Wednesday.

“We are expecting a positive nod from the FATF’s apex body,” he said.

Pakistani authorities had also already claimed that the Joint Working Group (JWG) of FATF had so far found the country compliant on a total 21 points out of the 27 identified in the prescribed action plan.