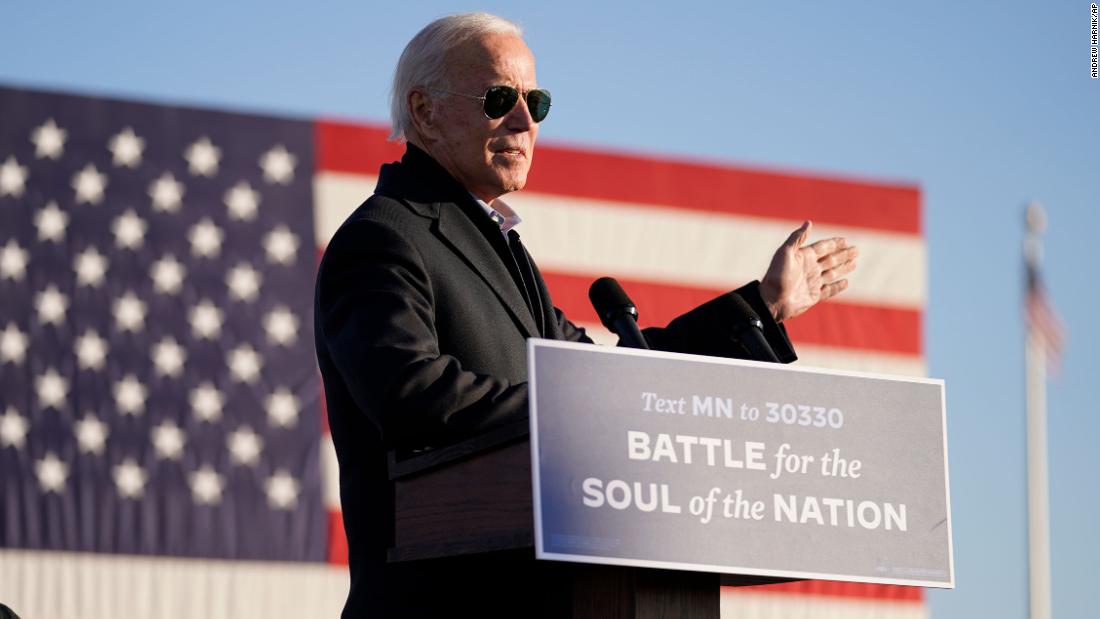 In the unedited, original video, signs in front of and behind Biden on the stage read “Text MN to 30330” — making it clear the event was in Minnesota.

However in the false video, the on-stage signs were edited to read “Tampa, Florida,” and “Text FL to 30330.”

The video was shared on Twitter by a person who accused Biden of forgetting what state he was in.

One version of the false video circulating on Twitter was viewed more than 1.1 million times in less than 24 hours.

The video was only labeled as “manipulated media” by Twitter on Sunday evening after it had more than 1 million views. The user then deleted the video.

President Donald Trump’s own team and his supporters have repeatedly pushed misleading videos arguing Biden is not mentally fit for office.
Back in March, Trump and his campaign promoted a clip that wrongly made it seem like Biden had endorsed Trump. He, of course, hadn’t.
In August, White House social media director Dan Scavino shared a video that purported to show Biden falling asleep during a TV interview. Expect the TV interview never happened; the whole thing was fake.
In September, the Trump campaign posted a video making it seem like Biden had forgotten the Pledge of Allegiance. He hadn’t.
And last week the campaign promoted a clip making it seem like Biden said he was running against George Bush, not Trump.

The videos appear to be gaining traction among Trump supporters.

Before a Trump event in West Salem, Wisconsin, last Tuesday, a woman interviewed by CNN said Biden would not be capable of running the country due to his mental capacity. “He forgets where he’s at, he forgets who he’s running against, he forgets what he’s running for,” she said.