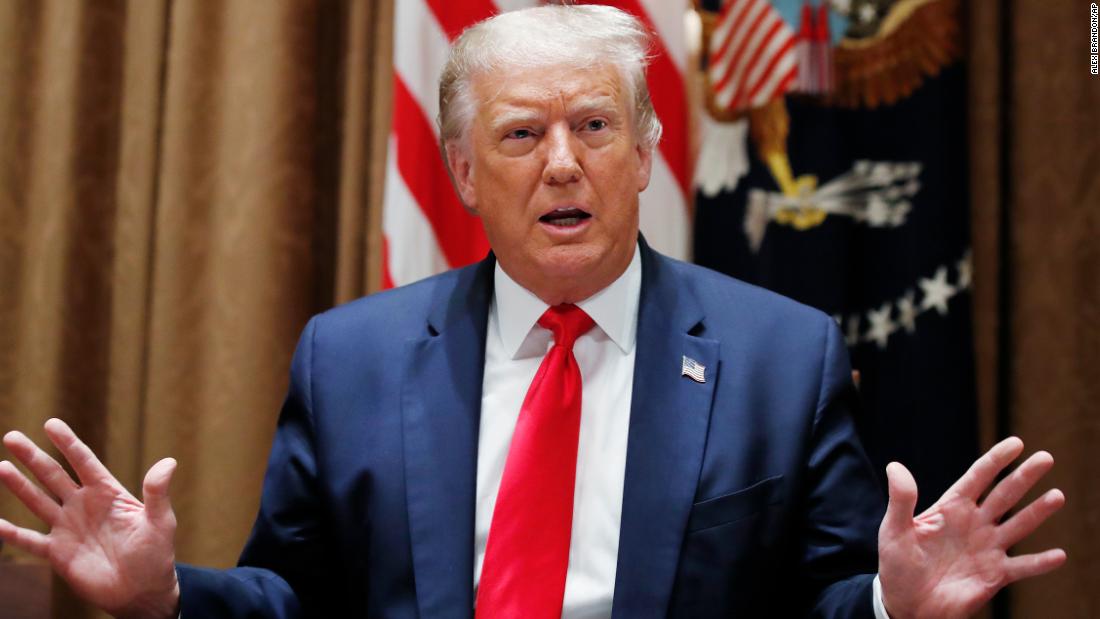 Overall he has painted an image of America descending into chaos, and argued that only he can provide the “law and order” needed to prop it back up.

Last week the President highlighted his effort to protect suburbanites, touting his rollback of the Affirmatively Furthering Fair Housing rule. The Obama-era update to a decades-old federal requirement aimed to eliminate discrimination and combat segregation in housing.
Painting the suburbs as a crime-ridden “hell,” the President lamented hard-working Americans forced to watch the value of their dream home value deteriorate under Democratic policies mandating the building of low-income housing.
On Wednesday, he tweeted that “all of the people living their Suburban Lifestyle Dream… will no longer be bothered or financially hurt by having low income housing built in your neighborhood.” Adding, “Your housing prices will go up based on the market, and crime will go down.”

He later called the rule “hell for suburbia,” remarking that “people fight all of their lives to get into the suburbs and have a beautiful home. There will be no more affordable housing forced in to the suburbs…It’s been going on for years. I’ve seen conflict for years. “

Trump claimed that the rollback of the AFFH means suburbanites will “no longer be bothered or financially hurt by having low income housing built in your neighborhood.”

Facts First: Parts of this are extremely misleading, while others are blatantly false. The AFFH does not mandate low-income housing to be built in suburban areas, and the rule, in its current form, was only updated in 2015 and paused as soon as the Trump administration took office, giving it little time to make an impact.

What is the AFFH?

The Affirmatively Furthering Fair Housing rule is a provision of the 1968 Fair Housing Act which aimed to end discrimination based on “race, color, religion, sex, familial status, national origin, and disability.”

Despite the Fair Housing Act being in effect for decades, many neighborhoods still remain segregated, with minority communities less likely to have access to good schools, health care and public programs necessary to help citizens rise out of poverty.

The law also required jurisdictions receiving federal money from the US Department of Housing and Urban Development to go beyond ending discrimination and promote programs that “affirmatively further fair housing,” but did not give a detailed explanation of how to do so. Attempts to implement this portion of the law were often unsuccessful.

In 2015, the Obama administration enacted new Affirmatively Furthering Fair Housing rules to hold all cities and towns that receive federal funding responsible for integrating their neighborhoods and was seen as essential to further level the playing fields for underprivileged populations. The change required these jurisdictions to examine and document racial discrimination in their neighborhood and create goals to reduce segregation.

In revoking the 2015 rule, President Trump leaves in place the more general obligation to “affirmatively further fair housing” written into the Fair Housing Act. The rules apply to any jurisdiction receiving federal housing money, not just suburbs and there is no clause within these rules to force the building of low-income housing into suburban areas.

Lisa Rice, the President and CEO of the National Fair Housing Alliance, described AFFH as communities on a local level analyzing what fair housing needs are in their neighborhoods.

However, that is exactly what President Trump has implied. And he has given a specific example. Last month in the Rose Garden, the President slammed his presumptive Democratic presidential opponent, Joe Biden, on his housing plan Trump said would “abolish the suburbs.” The President specifically referenced Westchester County, New York, as an example of low-income housing being built in the suburbs, “I’ve been watching this for years in Westchester, coming from New York…They want low-income housing built in a neighborhood.”

It appears President Trump is referring to a 2009 desegregation agreement the county made as part of a settlement in a lawsuit brought by an antidiscrimination group, years before Obama’s Affirmatively Furthering Fair Housing Rule was enacted. According to the National Low Income Housing Coalition, the Anti-Discrimination Center sued the county in 2006 for failing “to affirmatively further fair housing” and alleged that the county had lied about their efforts to HUD.
The US District Court for the Southern District of New York found Westchester County had “utterly failed” to meet the AFFH guideline and that it had lied while claiming payments from HUD. The eventual settlement required the county to spend millions of dollars to build 750 units of affordable housing in 31 of the county’s least diverse communities.

As part of his assault on the AFFH, Trump has continued to claim that the Obama-era change caused crimes rates to rise in the suburbs and housing prices to fall.

“It was a bad rule and it was causing tremendous, housing prices going down and crime going up,” Trump said last week.

Facts First: Housing experts have said that the AFFH was difficult to implement before President Obama changed the rules. There is no evidence or data to back up Trump’s claim that Obama’s AFFH affected home prices and crime rates before President Trump took office.

“President Trump is trying cloak fair housing under this guise of keeping the suburbs safe from ‘those low income people’,” said the National Fair Housing Alliance’s President, Lisa Rice. “It’s almost as if he’s assuming that all black people live in low-income house or that low-income housing is just for black people.”

Rice noted that while the President has used thinly veiled rhetoric on race, fair housing also applies to a wide range of individuals. “Are your programs in any way discriminating against families with children in an illegal way? Against people with disabilities. It’s really about building and fostering communities of opportunity.”

President Trump appears to have a dated view of the American suburbs as an all-white safe haven full of housewives in constant fear of inner-city violence spilling over their white picket fences. In a tweet intended to slam Joe Biden, he told “the Suburban Housewives of America” the Democratic presidential nominee would “destroy your neighborhood and your American Dream,” seemingly unaware that most women do not want to be addressed as a “housewife,” regardless how they spent their days.

“The ideal that everybody is created equal, and should have equal opportunities and that includes equal opportunities to housing. So what Trump is trying to say is that the suburbs, the suburban moms, don’t want the children of people of color to be treated. The way that their kids are treated. They don’t want. You know, the children of people of color to say have the same access to opportunity as their children have. I don’t think that’s true. I don’t think that’s an American value.”