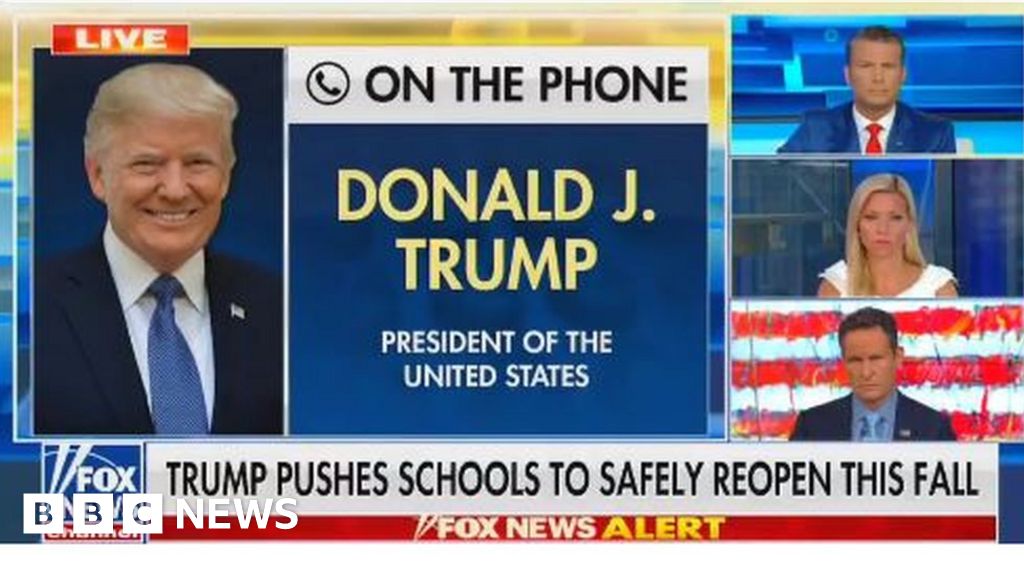 Facebook says it has removed a post from US President Donald Trump’s page because it contained false claims about the coronavirus.

The clip was from an interview the president gave to Fox News earlier on Wednesday in which he said children were “almost immune” to Covid-19.

A Facebook spokesperson told US media on Wednesday evening: “This video includes false claims that a group of people is immune from COVID-19 which is a violation of our policies around harmful COVID misinformation.”

What did Trump say in his TV interview?

Speaking by telephone to morning show Fox and Friends on Wednesday, Mr Trump argued it was time for all schools nationwide to reopen.

He said: “If you look at children, children are almost – and I would almost say definitely – almost immune from this disease.

“So few, they’ve got stronger, hard to believe, I don’t know how you feel about it, but they’ve got much stronger immune systems than we do somehow for this.

He also said of coronavirus: “This thing’s going away. It will go away like things go away.”

How dangerous is coronavirus for children?

Children can catch and transmit the virus, but they run an extremely low risk of becoming ill from it.

Adults – and particularly older adults – are far more likely to be seriously ill and die from complications.

The largest study done so far, involving more than 55,000 hospital patients, found that only 0.8% were under the age of 19.

Half of all the people with confirmed coronavirus who were admitted to critical care units in England, Wales and Northern Ireland were 60 or older as of 31 July, according to a research charity.

But more than three-quarters were over 50 and fewer than 10% were younger than 40.

Children often have “milder disease than adults”, according to Prof Adilia Warris, a paediatric infectious diseases specialist at the University of Exeter, and deaths have been rare.

There have been some extremely rare cases of children developing an inflammatory syndrome similar to Kawasaki disease, and scientists are exploring a possible delayed immune response to coronavirus.