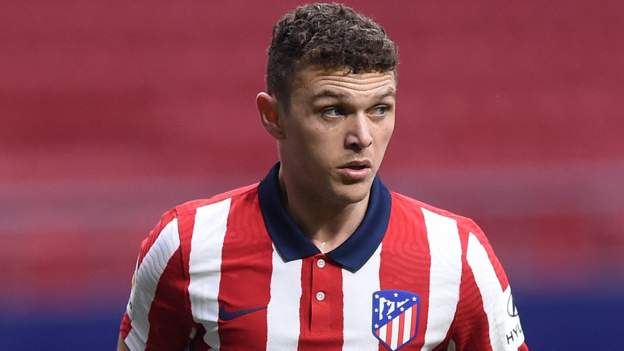 Atletico Madrid right-back Kieran Trippier will continue to serve a 10-week ban in England after the Football Association failed to push back his suspension for betting breaches.

Tripper is still allowed to play for La Liga leaders Atletico in Spain because they have challenged the validity of the ban with world governing body Fifa.

Atletico contest the FA’s right to ban a player not active in its league.

Trippier’s ban in England started on 21 December and runs to 28 February.

The 30-year-old England international was suspended and fined £70,000 by the FA after being found to have broken betting rules.

Trippier told a friend to “lump on” over his 2019 move from Tottenham Hotspur to Atletico Madrid, according to English football’s governing body.

Following a request from the FA, Fifa extended the ban worldwide.

Atletico appealed against the Fifa suspension and it was provisionally lifted pending a decision.

The former Manchester City and Burnley defender played the full 90 minutes as Atletico beat Sevilla on Tuesday, extending their advantage over neighbours Real Madrid at the top of the Spanish top-flight table to four points.

This is an interesting case now, which has wider ramifications for the FA.

Effectively, Trippier is now serving a 10-week ban in England for breaching betting regulations. Clearly he doesn’t play in England, although it would apply if he returned to the country this month – a hypothetical scenario mentioned within the case.

This matter is now with Fifa, with no timescale for it to be resolved or indication what the decision is likely to be.

At this stage, it is impossible to say how Fifa would apply the sanction if it found in the FA’s favour. By the time this is determined – which won’t be soon – Trippier will have served his 10-week suspension in England.

Conversely, if Fifa finds against the FA it would mean the English body could not apply a sanction with worldwide effect.

To add another layer of complication, if Trippier returned to England in the summer – again, a hypothetical scenario – he would already have served his suspension.

Interestingly, former England striker Daniel Sturridge – or his Turkish club Trabzonspor, more realistically – did not appeal against his four-month ban by the FA in the same way.

Sturridge has not played since it was invoked in March 2020, although he is free to play now.