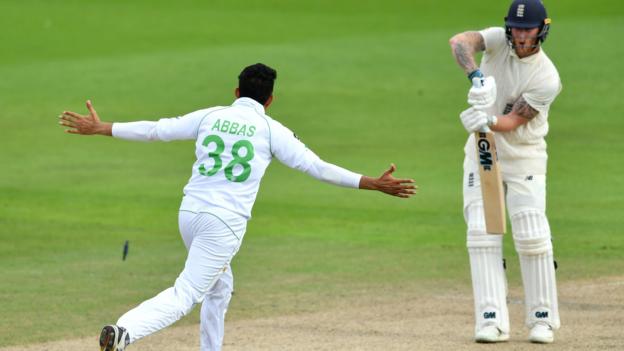 England are already facing defeat in the first Test after a Shan Masood-inspired Pakistan dominated the second day at Emirates Old Trafford.

Opener Masood worked his way to 156, forming the basis of Pakistan’s 326 all out.

He added 105 with Shadab Khan, who busied his way to 45 in a post-lunch period where England surrendered the initiative with some baffling tactics.

When they came to bat, the hosts were exposed to Pakistan’s skilful, enthusiastic and dangerous attack and limped to 92-4.

Rory Burns was lbw to Shaheen Afridi in the first over and Dom Sibley fell in the same way to Mohammad Abbas. When Abbas bowled Ben Stokes, England were 12-3.

Joe Root and Ollie Pope managed to add 50, only for Root to be caught behind off the leg-spin of Yasir Shah for 14.

Pope ended unbeaten on 46 in the company of Jos Buttler, England 234 adrift and looking to the lower order to retrieve a dire situation.

Even if England can get somewhere near Pakistan’s total, they face the prospect of batting last on a dry surface offering turn and showing signs of uneven bounce.

This was a miserable day for England, who were the architects of their own disarray and once again face losing the first Test of a series.

The crime is that, at lunch, they had control. With their four seamers, particularly James Anderson and Stuart Broad, expertly utilising the overcast conditions, they picked up three wickets for only 48 runs in the morning session, including Anderson having Babar Azam caught at first slip without adding to his overnight 69.

After the break there were only five overs remaining until the second new ball was due. Perhaps to hasten its arrival and save his pacemen, Root opted to bowl his part-time off-breaks in tandem with Dom Bess. It was a mistake from which England never recovered.

Previously shackled, Masood and Shadab added 27 in five overs. With the momentum reversed, Pakistan continued to score against the second new ball, bumping along at more than four an over in the afternoon session.

England strangely ignored Jofra Archer, bowled bouncers when the new ball was only 12 overs old and were ragged in the field. Wicketkeeper Buttler, who twice reprieved Masood on day one, dropped Yasir off Bess, albeit an error that did not prove costly.

When they came to bat, they were tortured by the contrasting styles of Shaheen and Abbas, and were left in danger of capitulating after losing three wickets in six overs.

Born in Kuwait, Masood was educated in England and had previously suffered at the hands of Anderson to the extent he had been dismissed six times while scoring only 15 runs.

This, though, was a magnificent century, his third in as many Test innings. The left-hander began with determined occupation and grew into some stellar strokeplay.

His first hundred runs took 251 balls, almost three-quarters of which were nudged and deflected behind square, but his next 50 came in 60, including some brutal treatment of the luckless Bess.

Masood and Shadab’s counter-attack was built on some brilliant running between the wickets. They pinched singles with drop-and-run tactics that England were powerless to prevent.

Only when Shadab played a wild swipe at Bess to sky to mid-on were England given an opening and they managed to take the last five wickets for 45 runs.

Archer took two in two balls and Masood was lbw to a Broad inswinger but, by that time, the damage had been done.

England left to cling on

Much was expected of the pacey Pakistan attack before the series. Abbas had an excellent tour here two years ago and the exciting pair of Shaheen, 20, and Naseem Shah, 17, have a combined age that is less than Anderson’s.

The hype was justified by a thrilling opening burst where it felt like every delivery carried a threat, with Pakistan players and staff both in the dressing room and on the hotel balcony filling the ground with noise.

Tall left-armer Shaheen swung the ball at just under 90mph. Burns was stuck on the crease and given out after Pakistan reviewed. Root needed a review of his own for one shown to be too high.

At the other end, Abbas was an entirely different proposition. Barely 80mph, his fingertip control results in nip off the seam. Sibley was palpably leg before and Stokes, eager to get down the pitch, walked past a wonderful delivery that moved away and clipped the top of off stump.

Root was out of sorts, but Pope found some fluency, taking the fight to the slippery Naseem as the Pakistan fielders constantly chatted.

Root fell needlessly attempting to cut a delivery that was too close to him, the shot of a captain who had endured an awful day.