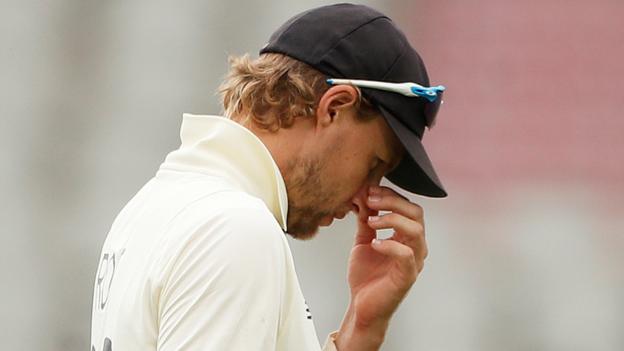 England are “miles away” from being the best Test side in the world, according to former captain Michael Vaughan.

Joe Root’s team beat West Indies 2-1 in July, but are under pressure in the first Test against Pakistan after a number of tactical errors on day two at Emirates Old Trafford.

“Against a team like West Indies you get away with it, but Pakistan are a level up,” said Vaughan.

“Australia or India will blow England away.”

Root spoke of England’s aim to become the world’s number one Test side in his pre-match news conference on Tuesday.

They are currently ranked fourth and have not lost a home Test series since 2014.

However, away from home they have only won in Sri Lanka and South Africa in the same period and have developed a recent habit of losing the first match of a series.

Defeat by Pakistan would be the sixth successive series in which England have been beaten in the first Test.

Speaking on the Test Match Special podcast, Vaughan said: “I’ve heard talk that England want to be the number one Test side in the world, but they’re miles away.

“Tactically, they get it wrong often and there are question marks on some areas of the team.”

On Thursday they surrendered the initiative to Pakistan with their tactical decisions after lunch.

The relentlessness of their pace bowlers helped England take three wickets for only 48 runs in the morning session.

However, with only five overs to go until the second new ball was available immediately after the break, captain Joe Root bowled his own part-time off-breaks in tandem with fellow spinner Dom Bess.

Pakistan took 27 runs in that period, beginning an afternoon session that saw them score at more than four an over on the way to a first-innings total of 326.

“When they had two spinners bowling, they didn’t realise how important that was for the match,” added Vaughan, who led England in their famous Ashes victory of 2005.

“The basics of the game are trying to win the first 20 minutes of every session and you do that by starting with your best two bowlers, or the next best two if they’re tired. They started with spinners after lunch and gave the momentum to Pakistan.”

The last time England won a Test when the opposition made more than 179 in the first innings of the match was in 2012, against West Indies.

“When the opposing team bat first and get a decent score, it’s been a common trend for England over the last three or four years, under Root’s leadership, that they struggle to lead the play,” said Vaughan.

“The England Test team are great to watch in a way because you never know what you’re going to get.

“But we do know what we’ll get when they bowl first. Always bat first against England, I would suggest.”

Aguero reaches 40 goals but is he a Champions League great?