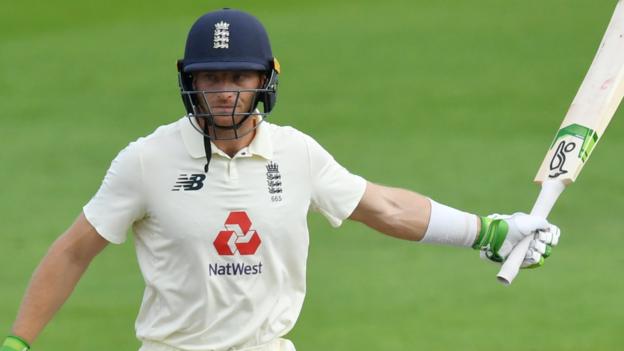 England snatched a riveting three-wicket victory over Pakistan in the first Test at Emirates Old Trafford thanks to a daring partnership between Chris Woakes and Jos Buttler.

Chasing 277 on a snakepit of a pitch, England looked all but beaten at 117-5, only for Woakes and Buttler to counter-attack in a partnership of 139.

Buttler was lbw reverse-sweeping Yasir Shah for 75 with 21 still required and the second new ball due.

The promoted Stuart Broad took England to within four, which Woakes got from an outside edge to end 84 not out.

It was Woakes who said on Friday night that England would draw on their experience on recent unlikely victories, and this latest success follows the drama of the World Cup final and the Headingley Ashes Test.

Not only were they second favourites for most of this fourth day, but also after conceding 107 on first innings after errors in the field, poor tactics and a top-order collapse.

They gradually battled back over the final two days, yet it was only when Buttler and Woakes were together that Pakistan’s energy was replaced by trepidation.

England win the opening match for the first time in six series and can earn their first success over Pakistan in 10 years if they win the second Test in Southampton, which starts on Thursday.

Newspaper headlines: ‘Change of strategy looms’ for UK as France locks down