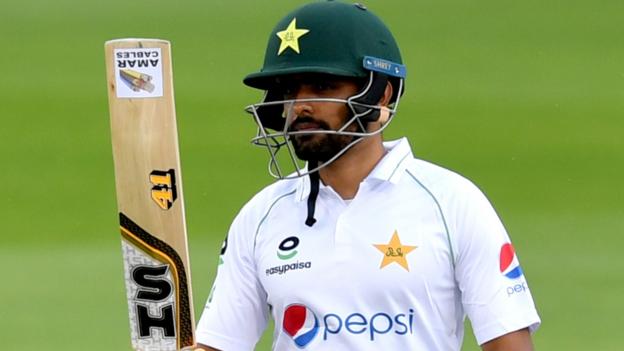 England endured a difficult start to the first Test against Pakistan on a frustrating opening day at Emirates Old Trafford.

The visitors moved to 139-2 in between 41 overs being lost to rain and bad light.

They had been 43-2 before Babar Azam stroked a classy unbeaten 69 in a partnership of 96 with opener Shan Masood, who is 46 not out.

They scored increasingly freely against an England side who lost their way with the ball after lunch, while wicketkeeper Jos Buttler dropped an edge off Masood and missed a straightforward chance to stump the same man from the bowling of Dom Bess either side of a three-hour break for rain.

Following an inspection at 17:00 BST, there was the farcical sight of no play taking place in bright sunshine until the players returned at 17:45.

When they did, the light then deteriorated to such an extent England could only bowl spin for the majority of the time until the players left for the final time at 18:11.

Better weather is forecast for the next three days, with Pakistan having built a good platform after choosing to make first use of a surface that looks ideal for batting.

If they can post an imposing first-innings total, it would allow their pair of leg-spinners, Yasir Shah and Shadab Khan, more leeway on a pitch that seems likely to turn.

With Ben Stokes not yet fit to bowl, England are unchanged from last week’s final Test against West Indies.

Babar serves notice of his class

Pakistan have drawn their last two series in England and are likely to pose a bigger threat than West Indies.

Their bowling is at least as threatening as the men from the Caribbean, but their batting is stronger and in Babar they boast arguably the most complete three-format batsman in the world today.

Though the surface is dry, batting first under the floodlights carried an element of risk for Pakistan, and the door was ajar for England when Abid Ali and Azhar Ali were removed in the space of three overs.

Babar was circumspect at first, his footwork tentative and his outside edge regularly beaten as he felt his way to two from 26 balls before lunch.

He was transformed after the break with drives through mid-on and punches through the covers off the back foot. The right-hander was particularly dismissive of off-spinner Bess, scoring 48 from his next 44 deliveries to move to a 70-ball half-century.

Left-hander Masood, a former student at Durham University, has previously struggled against England – James Anderson had dismissed him six times for 15 runs before this Test.

Bar the reprieves off Bess, he showed sound judgement and a calm temperament, pinching singles as the perfect foil for Babar.

Around 13 hours after an entirely different team was beaten in the third one-day international against Ireland, England were beginning their fourth behind-closed-doors Test in as many weeks.

The match sharpness gained through the series against West Indies should mean England are better prepared than Pakistan, and even though captain Joe Root said he would have batted first, the morning conditions gave the hosts the opportunity for early inroads.

They beat the bat on a number of occasions but, if anything, were collectively too short against the determined and organised Pakistan opening pair.

When England went full, they got the rewards. Archer bowled Abid through the gate with a beautiful inswinger, while Woakes trapped tangled captain Azhar in front.

Woakes, the pick of the bowlers, also troubled Babar, but strangely was not seen after lunch as Pakistan took advantage of a number of loose deliveries.

If the nick Buttler put down was not immediately obvious, the stumping was glaring, with Masood running past an off-break he was aiming to hit down the ground.

Babar continued to find the boundary in the late gloom and it was perhaps a relief to the hosts when the umpires decided it was too dark to continue.