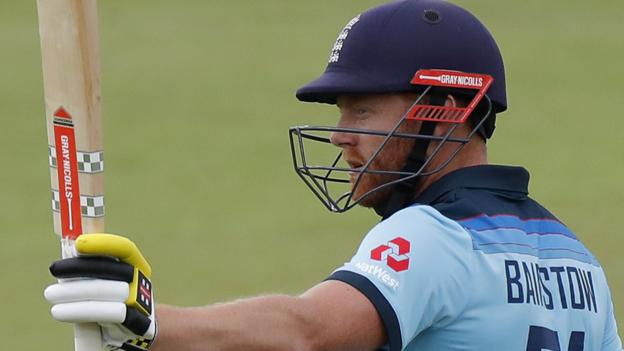 Jonny Bairstow says his blistering 82 from just 41 was “great fun” as he helped England to a four-wicket victory over Ireland and secured a series win.

The opener reached 3,000 one-day international runs as the hosts went 2-0 up in the series at the Ageas Bowl.

“To be back out playing is really pleasing – and to be striking it as well as I am was good,” said Bairstow.

He added: “It’s been a journey of ups and downs but since I’ve fought my way back into the side, it’s made me really proud to stay in such a good side.

“You know there are people that are after your place. To have got there [3,000 runs] is very nice.

“There are bits to improve on, there are things that, when we look back on, we need to step up in areas, but that will come in time. We’ve only played a couple of games.

“There are periods that we can and will get better in. But we’ve come back and won two out of two.”

The hosts slipped up after Bairstow’s quickfire 82 and were struggling at 137-6 before Sam Billings (46) and David Willey (47) took England to victory with an unbeaten stand of 79.

“Chasing that total on not as good a wicket, the guys showed good intent; we made more mistakes today though,” said England captain Eoin Morgan.

“It was another well fought game. We bowled reasonably well, probably not as well as two days ago.

“The thing today was we made more mistakes. Hopefully we’ll make fewer mistakes in three days’ time and look more of a stronger batting unit.”

Ireland again had to rely on an impressive knock from Curtis Campher, after his unbeaten 59 on debut, as he hit 68 following another top-order collapse.

The tourists, as in last’s year ODI in Malahide and Test at Lord’s, failed to seize their opportunity when England were on the back foot but it was an improved performance following Friday’s six-wicket defeat.

“We didn’t get a big enough total, we created a bit of pressure,” said Irish captain Andrew Balbirnie.

“Curtis Campher has put in two standout performances with the bat and impressed again with the ball.

“Our batting overall hasn’t been good enough and we can’t keep relying on Curtis. The guys love their cricket and we want to make sure we are not just making up the numbers.”