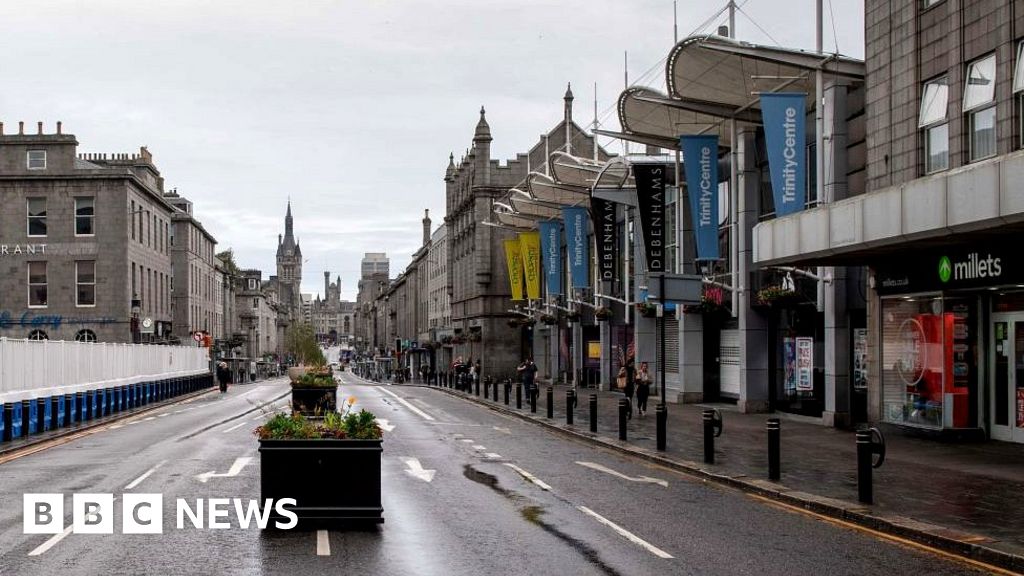 The streets of Aberdeen were “eerily quiet” during the first night of Scotland’s first local lockdown.

Nicola Sturgeon announced the tightening of restrictions on Wednesday after cases from a coronavirus cluster rose sharply.

Bars, cafes and restaurants will remain shut for at least seven days.

Extra police have been sent to the city to help increase patrols but the first minister said she hoped compliance would be voluntary.

More than 228,000 people living in the city were told they should not enter each other’s homes or travel more than five miles as restrictions were re-imposed.

Officials later announced that visits to hospital and care homes from a named family member or friend would also be stopped, with only essential visits allowed.

The number of cases linked to bars in the city centre rose to 54 by Wednesday and the first minister said community transmission could not be ruled out.

The restrictions will be reviewed next Wednesday and may be extended further if required.

Police Scotland posted video of extra police officers from its Flexible Response Unit making their way to the city to support local police.

Deputy Chief Constable Will Kerr said: “We are putting somewhere between 10-15 extra patrols in the city from 17:00 on Thursday and over the next few days and the weekend, to reassure the vast majority of the public who will continue to comply with instructions and guidance because they know how important it is.

“But it is also to deal with a small minority who decide that they don’t want to do something and put others’ health at risk.

“We will clearly and undeniably enforce the law when it comes to those people.”

Other organisations were also beginning to react to the reimposed lockdown.

NHS Grampian also said it was suspending visiting at all its hospitals, except for patients nearing the end of their life.

Restricted visits are also allowed for one parent with a child at Royal Aberdeen Children’s Hospital or for one birthing partner at Aberdeen Maternity Hospital and maternity units.

At her daily briefing, Ms Sturgeon said the situation in Aberdeen should be “the biggest wake-up call” since the early days of the pandemic.

Details of the cluster, which was initially linked to people who had visited the Hawthorn Bar on 26 July, first emerged on Sunday.

Ms Sturgeon said 54 cases had now been associated with the cluster and 191 close contacts had been traced through the Test and Protect system.

NHS Grampian has published a list of venues which have been visited by people linked to the cluster, including 28 bars and cafes.

People who have visited any of these premises recently are being urged to be “extra vigilant” about symptoms.

But some of these venues told BBC Scotland they had not been contacted by Test and Protect. Brewdog bar tweeted that it had not heard from the NHS service.

Stuart McPhee from Siberia bar in Belmont Street told the BBC: “We closed after a customer got in touch to say they had tested positive. We saw a list released by NHS Grampian and some venues don’t even know they have been named.

“We need clear, concise protocols and messages that allow confidence to be built in the long term.”