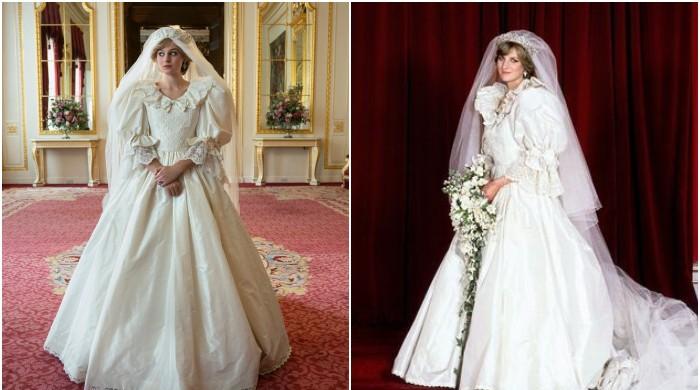 Netflix original series The Crown has unveiled its first look at Emma Corrin stunning as Princess Diana in her wedding dress.

The official Twitter handle of the series gave a glimpse of Corrin essaying the avatar of Lady Di at her wedding day for the fourth season of the royal drama.

“A first glimpse of Princess Diana’s wedding dress. Emmy award-winning costume designer Amy Roberts wanted to capture the same spirit and style of David & Elizabeth Emanuel’s original design, without creating a replica for Emma Corrin,” the caption read alongside a photo of the actor.

Speaking to British Vogue earlier, Corrin revealed the first reaction of the cast and crew on the sets of the show when she stepped out donning the replica of the iconic wedding dress.

“The Emanuels, who designed the original, gave us the patterns, and then it was made for me,” she said.

“We were filming the scene when you first see her in the wedding dress — I think it was Lancaster House in London — and I had a team of about 10 people helping me put it on, because it’s massive,” she went on to say.

“I walked out and everyone went completely silent More than anything else I wear in the series, it’s so … It’s her,” she added.