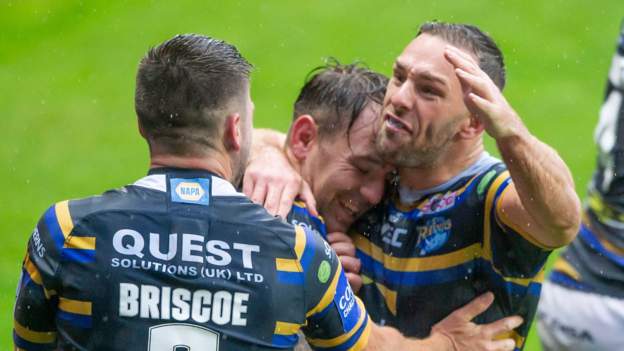 Leeds Rhinos reached their first Challenge Cup final for five years with a dominant 26-12 win over Wigan at a rain-soaked Totally Wicked Stadium.

Leeds will play the winners of Salford and Warrington in the final at Wembley on Saturday, 17 October.

Rhinos had not reached a final since thrashing Hull KR 50-0 in 2015, but victory in their 49th Challenge Cup semi-final never looked in doubt after Martin’s early penalty kicked them in front.

Indeed, such was their dominance of possession and territory that Wigan did not manage to have a single play-the-ball in the Leeds 20 in the whole of the first half.

Luke Gale’s superb 40-20 laid the platform for Leeds’ first try and they capitalised on their field position 10 metres from the Wigan line when Martin spotted a gap in the Warriors defence to power over.

Gale’s exquisite kicking game was also at the heart of the Rhinos’ second try when his high, hanging kick was knocked back by Liam Sutcliffe to Richie Myler, who put Handley in unopposed.

A third try followed on the stroke of half-time when Konrad Hurrell’s perfectly timed pass put Briscoe in at the corner.

Wigan improved after the break but saw their route back into the game lost when Dom Manfredi’s try was ruled out for an earlier knock-on by Thomas Leuluai.

But after a period of fierce defence, Leeds reasserted their dominance and were rewarded when Sutcliffe was stopped short of the line but offloaded for Handley to cross again.

To their credit, Wigan refused to give up and got on the scoreboard through Smith’s length-of-the-field run, before Hardaker darted in for a second consolation score.