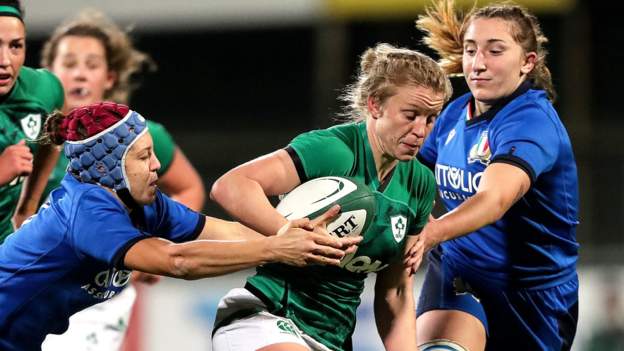 Ireland moved up to second in the Women’s Six Nations standings after a 21-7 win over Italy at Energia Park.

However Ireland led at the break thanks to scores from Lindsay Peat and the returning Claire Molloy.

The second half was littered with errors and stoppages but a penalty try with 10 minutes remaining secured the win for Adam Griggs’ side.

Some 245 days since their last outing against England, Ireland’s build-up was disrupted after full-back Eimear Considine and replacement prop Laura Feely were ruled out after inconclusive Covid-19 test.

Italy, who stunned Ireland in Rome in 2019, came flying out of the blocks with Tyrrell and the combined efforts of Kathryn Dane and Laura Sheehan denying the visitors try-scoring chances after some rusty Irish handling.

Tyrrell, making her first international start at fly-half, looked nervy in the early stages and kicked straight into touch, a mistake which Italy capitalised on.

From the resulting line out, powerful flanker Giada Franco burst through three tackles after Italy retained possession, with Michela Sillari popping a pass up to the oncoming hooker Bettoni who powered over the Irish line.

After weathering the Italian storm in the opening 30 minutes, in which Ireland had just just 29% of possession, the hosts burst into life when the settled Tyrrell chipped through to Beibhinn Parsons, who fumbled the ball with the try line gaping.

Despite the missed opportunity and a further chance squandered by lock Nicola Fryday, Griggs’ side got on the board when Peat barged her way over from a rolling maul.

Just 12 days shy of her 40th birthday, the prop took on two Italian defenders before touching down, which was confirmed after a brief check by TMO Neil Paterson.

With the wind in their sails, Ireland pressed for their second try before the break with Sheehan scythed down in the Italian 22.

However Ireland kept their composure with Molloy, who won her 70th cap, rounding out a superb team try after some excellent work from Enya Breen, Dane and Peat.

Despite the half-time whistle halting their momentum, Ireland continued where they left off and won a penalty deep in the Italian half however another handling error from Sheehan stopped any try-scoring opportunity.

Indiscipline at the breakdown cost Ireland when Molloy made a break into the Italian 22, however Fryday entered the ruck from the side which allowed the visitors to clear their lines.

Ulster’s Brittany Hogan made her debut on 63 minutes as the early pace of the game halted due to various injury stoppages and handling errors.

Undeterred, the superb Molloy made another half-break into the Italy 22, who were penalised for not rolling away but hooker Cliodhna Moloney was adjudged to have thrown a crooked lineout as another chance went abegging.

However Moloney, in her last action before being replaced by Ulster debutant Neve Jones, charged down Veronia Madia’s clearance kick to hand Ireland a five-metre scrum.

Ireland thought they had touched down from the resulting set play on 70 minutes when captain Ciara Griffin powered over, however scrum-half Dane was deemed to have blocked opposite number Sofia Stefan.

Despite Dane’s infringement, referee Hollie Davidson adjudged prop Silvia Turani to have pulled out of the scrum and subsequently awarded Ireland the penalty try.

After winning their three home matches, Saturday’s victory leaves Ireland second in the table, albeit it some six points behind runaway leaders England, ahead of the final game against France on 1 November.