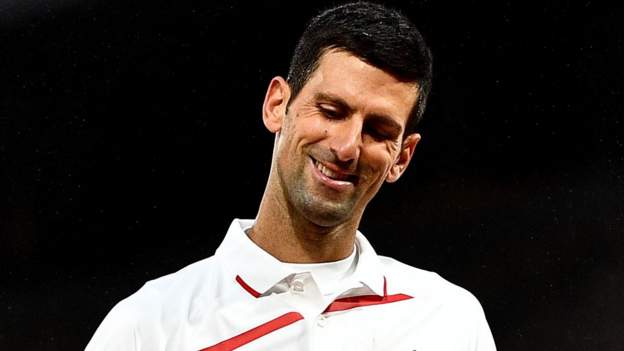 World number one Novak Djokovic put in another assured performance to beat Daniel Elahi Galan and reach the French Open fourth round.

Djokovic, who took the first set in 25 minutes, has lost just 15 games in his opening three matches.

He will face 15th seed Karen Khachanov of Russia for a place in the quarter-finals in Paris.

It is the 11th consecutive year that Djokovic has reached the last 16 at Roland Garros.

Galan got the biggest cheer of the day when he finally got on the board after losing the first eight games.

There were moments for Galan – he had two opportunities to break an increasingly frustrated Djokovic at 4-2 in the third set – but the 2016 champion was able to shut him down.

Djokovic finished with 37 winners and saved all five break points he faced, with his drop shot working to particularly good effect.

Djokovic also stepped in when his opponent slipped as heavy rain fell.

Play initially continued while the roof on Court Philippe Chatrier was closing, causing Galan to slip on a muddy patch of clay mid-rally.

Djokovic stopped and took his seat, allowing the roof to fully close and the staff to dry the court before play resumed.

He will face a tougher test against Khachanov, who beat him in the Paris Masters final two years ago.

He joins Sebastian Korda in the last 16 as the first qualifiers to reach that stage at Roland Garros in nine years.

Altmaier has yet to drop a set in the tournament and will face 17th seed Pablo Carreno Busta in the last 16.

The US Open semi-finalist was the winner of an all-Spanish meeting with 10th seed Roberto Bautista Agut, seeing off his compatriot 6-4 6-3 5-7 6-4.

Carreno Busta, who was a break down in the fourth set, hit 65 winners to make it through in three hours and 22 minutes.

Greek fifth seed Stefanos Tsitsipas, 22, was racing into the next round when Slovenian opponent Aljaz Bedene was forced to retire at 6-1 6-2 3-1 with an ankle problem.

Russian 13th seed Andrey Rublev breezed past Kevin Anderson to reach the fourth round at Roland Garros for the first time.

The 22-year-old, who had never won a French Open match before this week, will play Marton Fucsovics for a place in the quarter-finals.