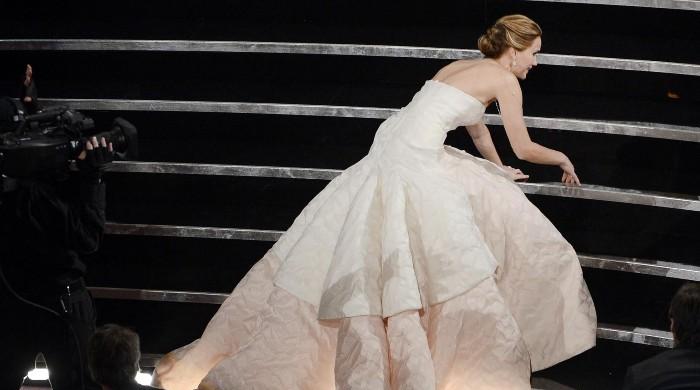 Hollywood star Jennifer Lawrence has been reigning over the industry for quite some time and during this extensive period, the actor has surely seen some ups and downs.

One such moment is her iconic fall at the Academy Awards in 2013.

While getting up-close and personal in her recent podcast Absolutely Not, hosted by Heather McMahan, Jennifer still recalls the night before the awards when she felt “nervous” and “very superstitious” for the upcoming day.

Only at the age of 23, Jennifer got the privilege to win the best actress award for her role in 2012’s Silver Linings Playbook.

“I didn’t want to acknowledge the possibility that I would win. I didn’t want to write down a speech,” she revealed on the podcast. “I had everything in my head. I was very, very nervous but I was ready. All of the adrenaline clears out and they call my name and I’m elated and I’m in shock. … And then I fell, and it erased everything from my mind. My full brain went blank.”

While she was on her way to receive her Emmy, the Hunger Games star tripped on her toes and fell on the stairs up to the stage. Although that was one of the most ‘embarrassing’ moments of her career, the Kentucky native still managed to maintain her composure and accepted the award with great courage and dignity.

While talking to the host, Jennifer also revealed how devastating it was for her to turn on CNN days after the ceremony only to see journalist Anderson Cooper saying that the actor faked the fall

“I saw him on CNN three days [after the Oscars] saying, ‘Well, she obviously faked the fall,’” the Hunger Games star said. “It was so devastating because it was this horrific humiliation to me. I don’t know if I’ll ever have a chance to give a speech like that again, so it didn’t feel good for me not to have a speech.”

Months after the embarrassing night, the actor bumped into him and ‘let him know’ how she felt. “Have you ever tried to walk up stairs in a ball gown? So then how do you know?’ He apologized immediately and said he didn’t know and gave this wonderful apology. I think we’re good friends now,” said Jennifer.

The fall has been a sensitive subject for Jennifer ever since, but as time passes by, she has managed to look back at it ‘fondly’.

Prince Harry under fire for silence on ‘The Crown’: report