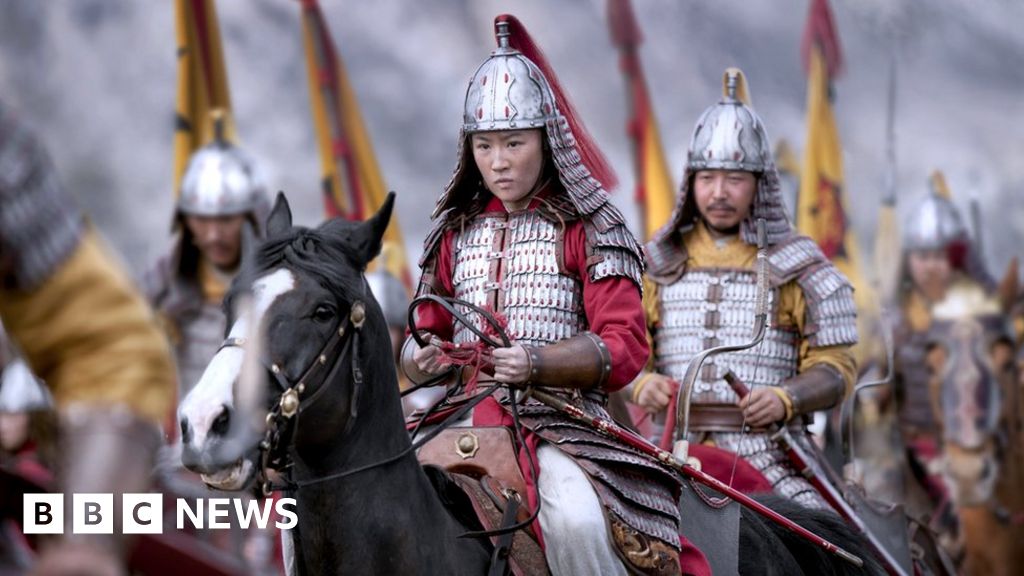 Disney’s Mulan has received mixed reviews, with many critics saying it should have been screened in cinemas.

The live-action remake of the animated 1998 film was originally due to be released in March, but was delayed due to the coronavirus outbreak.

As a result, it has now been made available to rent in the UK for £19.99 on streaming service Disney+.

“Why on earth didn’t Disney put this on the big screen?” asked Robbie Collin in The Telegraph.

He described it as a “visually stunning but heartless movie,” adding that “its big-bucks effects are lost” on the small screen.

“There isn’t a scene, or perhaps even shot, in [director] Niki Caro’s film which doesn’t deserve to be seen at a considerably larger than living room scale,” he said.

Empire’s Beth Webb agreed the small screen does a “disservice” to the film, adding that its bypassing of cinemas feels like a “crying shame”.

But she praised the film itself, writing: “Mulan is not only the best live-action Disney adaptation to date, but also a dazzling, moving, hair-prickling spectacle.”

Caro previously helmed Whale Rider and The Zookeeper’s Wife before signing up to direct Mulan, which stars Liu Yifei in the lead role.

When Caro was announced as Mulan’s director in 2017, commentators noted she was only the fifth female in history to direct a film with a budget of more than $100m (£75m).

But some critics suggested the film’s big budget hasn’t resulted in a successful film.

Keven Maher of The Times awarded the film just two stars in his review, which is titled: “How to make a mess of a $200m movie.”

He described the film as a “structurally calamitous reboot”, adding: “Mulan is clunking, illogical and anaesthetised by political correctness.”

He concluded: “Mulan has only shown us what we’ve known all along. That women are every bit as good as the boys, and that like their male predecessors (I’m thinking here of the men who directed The Lone Ranger, Jack the Giant Slayer and Tomorrowland), they too can make a mess of a $200 million movie.”

Mulan tells the story of a young Chinese girl who who learns that her weak father is to be called upon to join the army.

Worrying that he would never survive the hardship of war, she disguises herself as male and joins in his place.

The Sun’s Dulcie Pearce was lukewarm about the new live-action remake, awarding it three stars.

“While there are some spectacular fight sequences with a large – but totally bloodless – death toll, there is a distinct lack of humour in this version, making it both songless and smileless,” she said.

The film received a similarly unenthusiastic review from Vanity Fair’s Richard Lawson, who said it had been “managed to death”.

“The new Mulan is a sweeping action movie with lots of cool fight choreography, and yet it never musters up a sense of awe. Even the loathsome Beauty and the Beast remake was not this bland and perfunctory,” he said.

“Mulan is not awful. It’s just inert, a lifeless bit of product that will probably neither satisfy die-hards nor enrapture an entire new generation of fans.”

The Evening Standard’s Charlotte O’Sullivan praised the “dazzling” lead performance from Yifei in her four-star review of the live-action remake.

“Liu often looks 13, but is actually 33,” O’Sullivan wrote. “She has the kind of face you never get bored of. There’s something Meryl Streep-y about her soulfulness and all her moves are magical.”

She added: “It must kill Caro and her director of photography, Mandy Walker, that the majority of viewers will only see this on the small screen (Mulan was made for IMAX).

“Nothing, however, can cut their moving, and mobile, heroine down to size. I’m as athletic as a bed sock but, for so many reasons, this movie made me want to do backflips.”

Variety’s Peter Debruge also praised Yifei, writing: “While not especially convincing in disguise – muddy cheeks do not a man make – Liu commands our attention, just as her character will the imperial army.”

He continued: “Caro chooses to privilege spectacle over fidelity, cramming so much into the film that it seems rushed.

“Then again, her whirlwind approach invites repeat viewing, serving up clean, elegant imagery destined to have a far longer shelf life than such disposable Disney offerings as Dumbo and Alice and in Wonderland.”

In his three-star review, The Guardian’s Peter Bradshaw described it as “an enjoyable piece of machine-tooled entertainment – though the envelope is not exactly pushed.”

“The battle scenes are very well managed, as watchable and exciting as anything else in the film, although for me the sheen of CGI illusion in the spectacle reduces its visceral power,” he said.

“Ultimately, there’s nothing ‘wrong’ with Mulan,” concluded Metro’s James Laxford. “It’s a likable adventure film with elegant visuals that showcase what Caro is capable of with a huge budget.

“However, it struggles with the same issues that have blighted the other remakes, and a more serious tone that makes you wonder if this really is the Disney family spectacular that many were hoping for.”