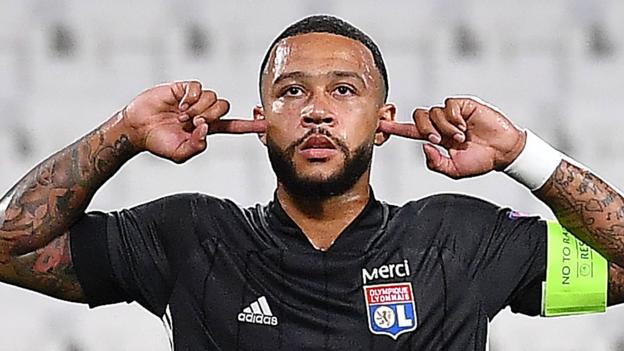 Lyon survived a Cristiano Ronaldo-inspired comeback from Juventus to hang on and book a Champions League quarter-final against Manchester City.

Leading 1-0 from February’s first leg, the French side were handed a soft early penalty which Memphis Depay converted in style.

That left Juve needing to score three times to progress and Ronaldo got one back from the penalty spot.

He then thundered in his 130th Champions League goal but Lyon held on.

Juventus manager Maurizio Sarri may have guided his side to a ninth straight Serie A title but they were lethargic throughout and his position could be under threat.

Juve have not won the Champions League since 1996 and the wait goes on at least another year.

To question Sarri after one year in charge may seem harsh, but the reality is that in Turin – as in Paris and in Munich – winning the league is the minimum requirement.

Ending that now 25-year drought in the Champions League is the goal and were it not for Ronaldo, Juve offered next to nothing as an attacking force.

Six of Sarri’s starting XI are in their 30s and they were painfully slow in approach at times.

Where there is the remarkable Ronaldo there is hope, and his second on the night was a superb, swerving left-footed shot from range that gave hope of another tilt at the business end of the competition.

But when Ronaldo headed a corner over the top, that hope was extinguished.

Ronaldo could yet win the trophy with a third team, joining Clarence Seedorf in an exclusive club, but time is running out for the 35-year-old. As it may be now for Sarri, too.

Are Kane and Son best Premier League partnership ever?