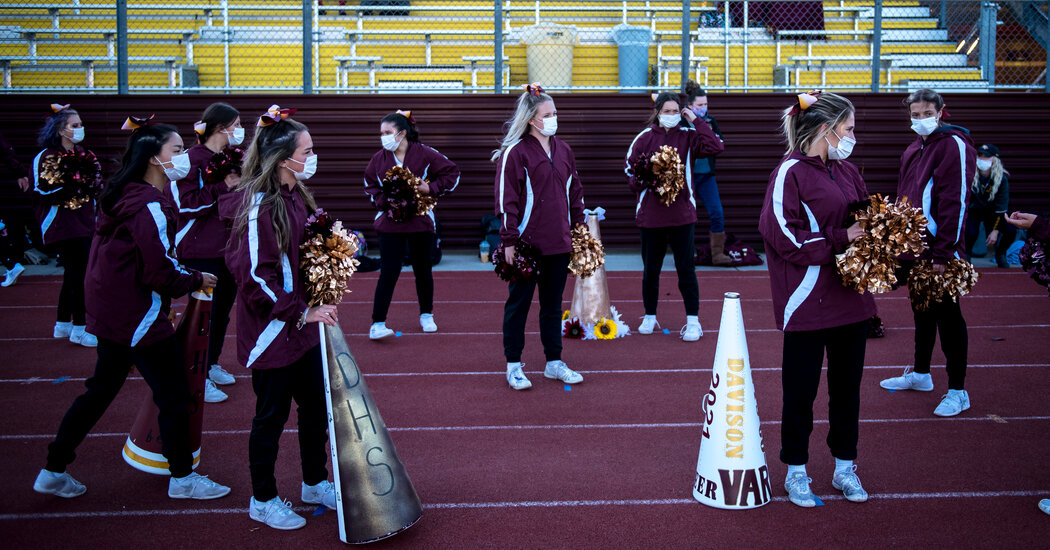 In Chicago, a sweeping stay-at-home order goes into effect on Monday. Philadelphia is expected to announce new restrictions on movement later in the day. In-person classes for high school and college students in Michigan have been canceled.

From a statewide, two-week lockdown in New Mexico to a new mask mandate in North Dakota, governors and mayors across the United States are taking increasingly stringent steps to slow the coronavirus after a staggering one million cases were recorded in the country over the past week alone. Cases are rising in 48 states.

Dr. Anthony S. Fauci, the nation’s top infectious disease specialist, said on Sunday that 200,000 more people could die by spring if Americans did not more fully embrace public health measures, even with an effective vaccine.

As President Trump has refused to concede the election, Dr. Fauci said health officials had not begun working with the transition team for President-elect Joseph R. Biden Jr. He also said Mr. Trump had not attended a meeting of his coronavirus task force in “several months.”

Michigan will suspend all in-person learning for college and high school students and indoor dining for three weeks, Gov. Gretchen Whitmer said. Other indoor gathering places, like casinos and movie theaters, must also close as part of the order, which takes effect Wednesday.

“This is the worst public health emergency our nation has faced in over a century, and our response has got to reflect the same level of urgency,” Ms. Whitmer said on Sunday as she announced new restrictions.

Dr. Scott W. Atlas, Mr. Trump’s coronavirus adviser, responded to the news of Michigan’s tighter restrictions in a tweet, writing, “The only way this stops is if people rise up. You get what you accept.”

Dr. Atlas, a radiologist, is not an epidemiologist or an infectious disease expert. He has made contrarian arguments, including that the science of mask wearing is uncertain.

In October, officials in Michigan revealed a plot to abduct Ms. Whitmer, who has been the subject of criticism from right-wing protesters for earlier measures she imposed to try to control the virus.

The governors’ announcements and blunt assessments echoed the stark warnings of Dr. Michael Osterholm, an adviser to Mr. Biden who said the virus was the most dangerous public health crisis since the 1918 influenza pandemic, which killed an estimated 50 million worldwide, including some 675,000 Americans.

“My worst fear is we will see what we saw happening in other countries, where people were dying on the streets,” Dr. Osterholm said on the NBC program “Meet the Press.” “The health care system is breaking, literally breaking.”

As coronavirus cases surge in almost every part of the United States, researchers say the country is fast approaching what could be a significant tipping point — a pandemic so widespread that every American knows someone who has been infected. But, as reflected in the polarized response to the virus, the public remains deeply divided about how and whether to fight it, and it is unclear whether seeing friends and relatives sick or dead will change that.

Many who have seen people close to them seriously affected say they are taking increased precautions. Others, though, are focusing on how most people recover and are shrugging off the virus, and calls for concerted efforts to combat it.

The alarming numbers in the United States — the highest case numbers and death toll in the world — underscore a reality found in small towns, big cities and suburbs alike: The coronavirus has become personal.

Researchers estimate that nearly all Americans have someone in their social circle who has had the virus. About a third of the population knows someone who has died from the virus, researchers say. But not everyone is hunkering down in fear or taking precautions as simple as wearing a mask.

Nearly 2.2 million Americans have lost a close family member to Covid-19, the disease caused by the coronavirus, research has shown, with troubling emotional and financial effects for children, widows and parents. Kristin Urquiza, 39, of San Francisco, said she continues to have nightmares about her father’s death from the disease in late June in Arizona. Rosie Davis, a skin laser technician in Carrollton, Texas, has been attending remote grieving classes since her mother died in May at a hospital.

“I will never have closure because I was not able to be next to her when she passed,” Ms. Davis said.

Seven months after he battled a serious case of Covid-19, the disease caused by the coronavirus, Prime Minister Boris Johnson of Britain announced on Sunday that he was quarantining after coming into contact with a lawmaker later found to be infected.

Mr. Johnson’s office said in a statement that he felt fine and was showing no symptoms.

Experts say it is still too early to know how long immunity to the coronavirus lasts, but reinfection with the virus is thought to be very rare for at least many months after the first illness.

Mr. Johnson went into isolation after the National Health Service’s test-and-trace program contacted him and said he had been exposed to the coronavirus. On Thursday, he spent about half an hour with a member of Parliament who tested positive after feeling ill.

Other than isolating himself, Mr. Johnson is conducting business as usual, officials said. “He will carry on working from Downing Street, including on leading the government’s response to the coronavirus pandemic,” his office’s statement said.

The prime minister had a close call with the virus in April, when he was hospitalized and spent three days in intensive care.

Mr. Johnson has been accused repeatedly of taking a lackadaisical approach to the pandemic, but when he emerged from the hospital he appeared chastened.

In an emotional five-minute video, Mr. Johnson thanked the country’s National Health Service, declaring it had “saved my life, no question.”

Over three months in the summer, the portion of people in Britain with detectable antibodies to the coronavirus fell by about 27 percent. Experts say it’s normal for levels of antibodies to drop after the body clears an infection. However, when needed, immune cells already carry a memory of the virus and can churn out fresh antibodies.

In other developments around the world:

Sheriff’s deputies in New York City broke up an unlicensed fight club, known as “Rumble in the Bronx,” on Saturday night. Many of those crowding inside were drinking, smoking hookah and not wearing masks, the authorities said.

More than 200 people had stood shoulder to shoulder shouting as two men sparred at the center of a Bronx warehouse. Some people hung over the barricades, social media showed, craning their necks for a better view. When one man knocked out the other, the crowd erupted in a thunderous roar.

The amateur fight would have been illegal before the pandemic, but with coronavirus cases spiking in the city, it risked being a dangerous underground event.

The leader of the club, Michael J. Roman, 32, and nine others were arrested and charged with unlawful assembly, health and alcohol code violations and participating in a prohibited combative sport. They were also each fined $15,000.

Just days earlier, Gov. Andrew M. Cuomo of New York had tightened restrictions in an effort to control the spread of the virus. Private indoor and outdoor gatherings statewide are now limited to 10 people, and gyms, bars and restaurants must close at 10 p.m.

Hours before breaking up the fight club, sheriff’s deputies had also disbanded a party in Brooklyn with nearly 200 guests and another in Manhattan with over 200 people.

Since July, Sheriff Joseph Fucito’s office has shut down at least one large illegal event each weekend.

Analysis: The world has more riding on Biden than any US president in decades