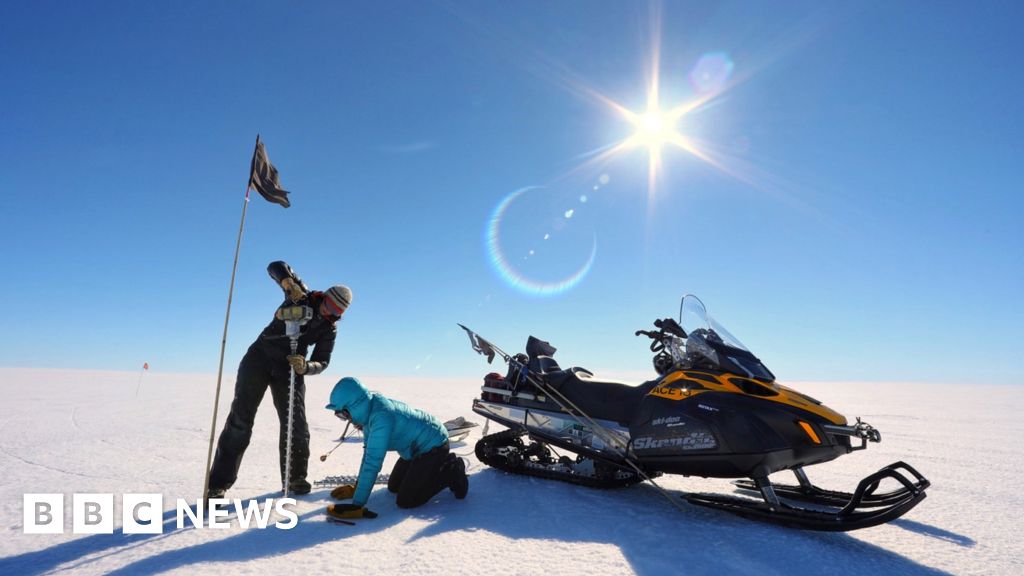 The British Antarctic Survey is scaling back its research in the polar south because of coronavirus.

Only essential teams will head back to the continent as it emerges from winter and virtually all science in the deep field has been postponed for a year.

This includes all work on the huge, and rapidly melting, Thwaites Glacier, which has been the focus of a major joint study with the Americans.

BAS says it doesn’t have the capacity to treat people if they get sick.

And in consultation with international partners this past week, very strict procedures will now be put in place to keep the virus out of Antarctica.

“No nation has the medical facilities to deal with people who are seriously ill,” explained BAS director Prof Dame Jane Francis.

“Everybody is taking very strong precautionary measures to make sure that any activity in Antarctica this year is as safe as possible,” she told BBC News.

The key logistical challenge is the uncertainty surrounding air routes.

Many of those who go to Antarctica each austral summer season do so by travelling on a plane to one of the main gateways – in South Africa, Australia/New Zealand and Chile – where they then make the hop across the Southern Ocean, either on a connecting flight or on a ship.

But with air corridors so severely disrupted at the moment, the gateways aren’t functioning as they should.

UK scientists and technicians, and their supplies, will therefore travel direct from Britain to Antarctica on the Royal Research Ship James Clark Ross.

It’s possible some sort of air connection could eventually be established via the Falklands with a refuelling stop on Ascension Island – but this is not Plan A.

With the limitations these arrangements impose, BAS has no alternative but to suspend the vast majority of its deep-field projects which send researchers into the interior of the continent to conduct their studies.

The emphasis will instead be on maintaining important climate observations made at the main stations of Rothera and Halley.

In recent years, the latter has been closed for the winter, with all its science instruments run automatically.

Given the present circumstances, Halley will remain in shutdown through the summer as well – although efforts will be made to visit the base to make sure the power generation system that supports the automated set-up can continue to operate all the way through to the summer of 2021/2022.

“We have enough fuel at Halley to get us through the next winter. The problem is that fuel is not in the tanks that feed the automation system; it’s in the bigger station tanks and we have to transfer it,” said Prof David Vaughan, BAS director of science.

This will only happen if BAS can get its fleet of Twin Otter aircraft from Canada, where they’ve just been serviced, down to Antarctica. But, again, flying these planes leg-by-leg through the Americas may prove impossible given the infection rates now being reported in some countries.

And if the Twin Otters don’t turn up, no-one will be able to get across to Halley from Rothera to fix the fuel issue.

The coronavirus crisis gripped the world in the middle of the 2019/2020 Antarctic summer season.

Getting all temporary personnel off the continent, and bringing them home, also proved to be a logistical headache, with some scientists and technicians enduring long waits and quarantine at Rothera, and on the Falklands, before getting a flight or ship berth home.

Even those who’d spent weeks gathering measurements in what are some of the remotest locations on Earth had to take their place in line.

This included the expedition teams returning from far-away Thwaites Glacier.

The colossal ice stream is the subject of a five-year, concerted research push to understand why it is melting so fast and the impact this will have on global sea levels.

It’s the single biggest science investigation on the continent right now, but the studies are going to have to take a gap year.

Prof Vaughan told BBC News: “We’ve agreed with the National Science Foundation, our US partner, that Thwaites is postponed by one year. We’ll do everything we can to get back in and hit the ground running in the subsequent season of 21/22. So, no project is being cancelled; no activities are being cancelled. It’s all just being postponed.”

Coronavirus: How much will it cost the UK?

Covid in Scotland: Hospitality curbs extended for another week