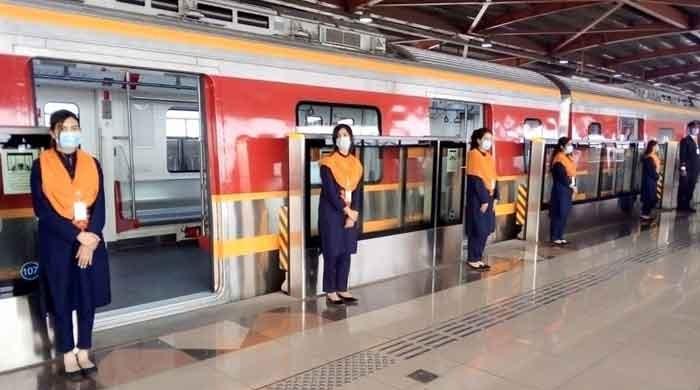 According to Radio Pakistan, the Orange Line project comprises of 26 stations and tracks spanning over 27.12km and besides providing people with a world class transport system, the project intends to lessen traffic on the Multan Road.

As many as 250,000 persons will be able to commute daily using the Orange Line trains.

“Orange Line Metro Train is the first transport project under CPEC which is also a symbol of Pakistan-China friendship and a gift for the people of Lahore,” read a statement on Radio Pakistan.

The Orange Line trains will run from 07:30 am to 08:30 pm. The fare charged for a one-way trip will be Rs40. Experts from China have trained Pakistani drivers on how to operate the train whereas the Lahore Waste Management Company will be responsible for the train’s cleanliness.

The trains, which will be run on electricity, will be provided power by eight grid stations. According to sources, the operational time of the trains will be extended to 16 hours. Cameras have been installed on all routes of the train and inside it as well.

Those who served Lahore and Punjab are behind bars: Saad Rafique

PML-N leaders Khawaja Saad Rafique and Ayaz Sadiq also celebrated the inauguration of the project, claiming it was the brainchild of former Punjab chief minister Shehbaz Sharif and the PML-N government.

“The government had been thinking all along not to give credit of the Orange Line train project to Nawaz Sharif,” said Sadiq.

Criticising the PTI’s Peshawar Metro Bus project, Sadiq said that the buses were not consistent in their performance. “Peshawar’s metro buses run, then stop. Then run and then stop [again],” he said.

Lamenting the rise of inflation across the country, Sadiq said that the masses were waiting for the incumbent government to be sent home. “That time is not far away when we will be rid of this government,” he said.

Attacking Prime Minister Imran Khan, Sadiq said that the premier’s thinking was “limited”, adding that he only spoke of chickens and bhang.

“First I used to come in the prime minister’s dreams. Now, he sees Nawaz Sharif in his dreams,” said Sadiq.

He appealed to the people of Lahore to ensure the PDM’s upcoming jalsa in the city turns out to be a successful one, promising the masses that the December “will be a decisive month” for the government.