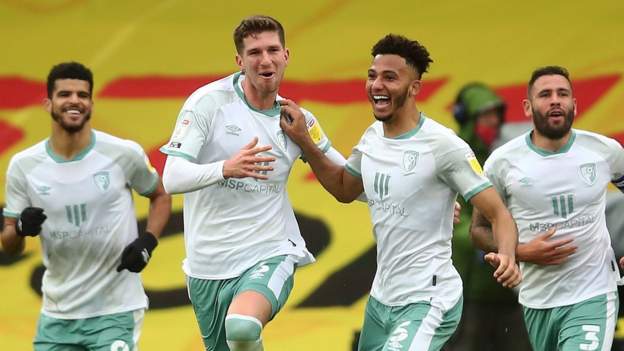 The 22-year-old Wales defender turned in from close range as the Cherries piled on the pressure during seven minutes of injury time, denying the Hornets a fourth 1-0 victory of the campaign.

Stipe Perica had scored what looked to be the winner after 12 minutes, meeting Ismaila Sarr’s inch-perfect cross at the far post to slide home.

It was a brilliantly worked goal and one of the few moments of genuine quality in the contest, with Craig Cathcart’s superb pass to switch the play controlled and then delivered into the box with real class by Sarr.

But Bournemouth were eventually rewarded for their perseverance with a late leveller that preserves their unbeaten record – although the point was still enough to send Watford second.

The two teams, both relegated from the Premier League in July, went into the match in good form, having lost just once between them so far this season.

It was the hosts who edged a first half that was both tight and combative, the tone for which was set in the opening two minutes by Cherries defender Lloyd Kelly, who could easily have been sent off for a studs-up challenge on Sarr.

The match opened up after the break, with Sarr only denied by a fine one-handed stop by Asmir Begovic to keep it 1-0, while the impressive Senegalese winger also later appeared to be dragged to the ground by Kelly when through on goal – with Kelly again fortunate to escape without a straight red card.

At the other end, visiting forward Dominic Solanke forced a smart save from Ben Foster and then fired narrowly wide of the post during a lively cameo off the bench.

It seemed as though Bournemouth’s clearest chance to equalise had been passed up when Joshua King’s header was tipped over by Foster right at the start of the seven added minutes.

However, after the resulting set-piece had initially been cleared, Mepham pounced to prevent a third Watford win in the space of eight days.