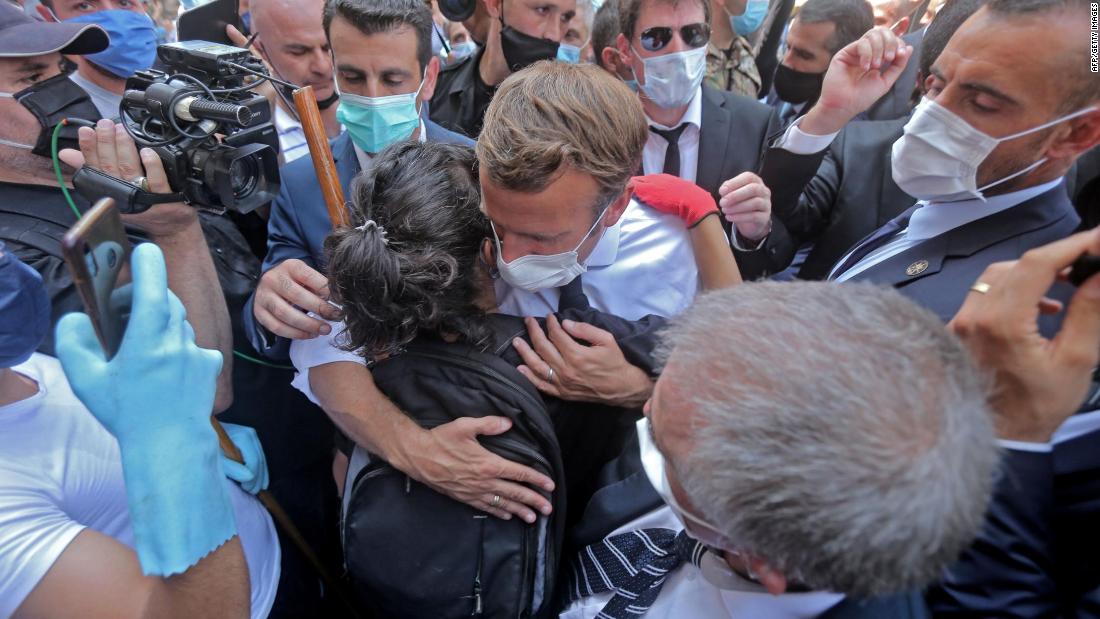 Macron told a crowd of reporters and angry people that he would propose a “new political pact” to Lebanon’s embattled political class during his visit to a predominantly Christian quarter of the city.

“The people want the fall of the regime,” the protesters shouted, echoing calls for the downfall of Lebanon’s long-time political elite that were popularized during a nationwide uprising late last year. “Michel Aoun is a terrorist! Help us,” one man pleaded, referring to the Lebanese president. One woman screamed inaudible words inches away from Macron’s face. “They are terrorists,” came the repeated cries.

Most people were masked, including the French president, who removed his face covering to speak to the press. There was no social distancing.

An Elysée Palace spokesperson told CNN that Macron said to Lebanese protesters: “I am here and it’s my duty to help you, as a whole population, to bring medication and food.

“This aid, I guarantee it, won’t end up in corrupt hands. I will speak to all political forces to ask for a new pact,” Macron said, adding: “I am here today to propose a new political pact. If they [the political forces] are not able to keep this pact, I will take my responsibilities.”

This was one of the first major displays of public disgruntlement after an explosion ripped through the city, damaging many of its buildings, and leaving neighborhoods in tatters.

There is a growing body of evidence, including emails and public court documents, that officials knew about a shipment of thousands of tons of ammonium nitrate — once described as a “floating bomb” — that had been confiscated by Lebanese authorities and was being stored in a warehouse at the port for the past six years, but had failed to act.
The revelation that the blast could be attributed to government negligence has reignited long-held frustration at Lebanon’s political class, which sunk the country deep into debt, and at endemic corruption that lined the pockets of the wealthy elite at the expense of basic public services and infrastructure.

The country was already seeing rising unemployment, soaring prices and a currency in free fall — for many, the explosion is further proof of government ineptitude and corruption.

Tuesday’s explosion destroyed much of the Lebanese capital’s main coastal port, leaving at least 137 people dead, 5,000 injured, and hundreds of thousands homeless. The area in the immediate vicinity of the blast resembled a smoking wasteland with a 400-foot-wide crater, and the empty shells of apartment buildings scarring the city skyline.

On Thursday, groups of young volunteers carrying brooms and shovels filled the streets of some of the worst affected areas to clear the rubble. Some arrived from faraway Lebanese towns.

In downtown Beirut, an army of volunteers launched into a massive clean-up effort Thursday, with people coming from all over city to help sweep streets, pulling debris off cars, or handing out food and water, as residents picked through the rubble of their homes and businesses, trying to salvage what they could.

Lebanon’s Economy Minister Raoul Nehme said that every apartment and business in the city has been impacted in some way by the blast, and state-run media said 90% of the hotels in the Lebanese capital had been damaged.

The number of deaths is expected to climb amid ongoing search and rescue efforts. Many people were still missing two days after the blast, and 300,000 have been displaced from their homes.

The city’s emergency services, already under strain due to the Covid-19 pandemic, were operating at decreased capacity after four hospitals were damaged in the explosion, which sent a shock wave that was felt 150 miles away in Cyprus and damaged buildings 10 kilometers (6 miles) away.

It’s still not exactly clear what led to the ignition that wiped out entire streets, but questions swirled Wednesday over whether the authorities had failed to act on those warning signs.
On Wednesday, Prime Minister Hassan Diab confirmed that 2,750 metric tons of ammonium nitrate — typically used as an agricultural fertilizer and in explosives for mining — had been stored for six years at a warehouse in the Beirut port without safety measures, “endangering the safety of citizens,” according to a statement.

The Lebanese cabinet has ordered an unknown number of port officials to be placed under house arrest in the coming days, pending the results of an investigation into the blast, according to Ghada Shreim, the minister for displaced people. Those involved in “the storage, guarding and investigating of Hangar 12 from 2014 until today” will be included in the arrests, Shreim said.

Lebanese President Michel Aoun promised a transparent investigation into the causes of the explosion, vowing Wednesday that those responsible would be held accountable and face “severe punishment.”

But years of government corruption has left little hope among those on the streets that the investigation will get to the truth of why such large quantities of the dangerous chemical were allowed to be stored in the middle of the city without adequate safety measures — and who is responsible.

“This accident here, this crisis, for 20 years they’re going to talk about it. The investigation, it’s never going to end. No conclusion, no results,” said one resident in downtown Beirut.

Jad Chaaban, associate professor of economics at the American University of Beirut, said “this is a criminal attack by the ruling state.”

“They have committed a crime by storing these nitrates for more than a decade there, with no accountability,” Chaaban said, adding that there is a rising anger among the people.

The cash-strapped country has been ravaged by economic and political turmoil exacerbated by the fallout from the Covid-19 outbreak. Violent protests have erupted over rising hunger and poverty, which has soared to over 50%, and power outages are common across the city. Banks have imposed capital controls limiting how much money people can withdraw and scenes of people scavenging garbage dumps for basic necessities have become commonplace.

Chaaban asked how the city can rebuild under such circumstances.

“People will go up to their destroyed homes, to shattered glass, destroyed trucks and cars, they have no dollars because the banks have blocked their dollar account to pay for any imports. Prices have more than quadrupled in the past few months, so nobody can afford to build anything. There is exasperation on the street, and there is a lot of anger,” he said.

Initial reports in state media blamed the blast on a major fire at a firecrackers warehouse near the port. Later, the country’s general security chief Abbas Ibrahim said a “highly explosive material” had been confiscated years earlier and stored in the warehouse, just minutes’ walk from Beirut’s shopping and nightlife districts.

The director-general of Beirut Port Hassan Kraytem said Wednesday he knew the materials stored “in warehouse number 12” were dangerous, “but not to that extent.” Maintenance was conducted on Warehouse 12’s door hours before the blast on Tuesday, according to Kraytem.

The director of Lebanese Customs, Badri Daher, told CNN that officials had written to legal authorities six times calling for that cargo be removed from the port, but the requests went unheeded despite repeated warnings by him and others that the cargo was the equivalent of “a floating bomb.”

Maritime traffic services and documents obtained by CNN describe a shipment of 2,750 metric tons of ammonium nitrate that was detained in Beirut in 2013. The Russian-owned ship, named the MV Rhosus, was destined for Mozambique but stopped in Beirut due to financial difficulties that also created unrest with the ship’s Russian and Ukrainian crew.

On Wednesday, Lebanese Information Minister Manal Abdel Samad Najd said there are papers and documents dating back to 2014 proving the existence of an exchange of information about the “material” confiscated by Lebanese authorities. She told Jordan’s state-owned channel Al Mamlaka that the exchange is being considered in relation to the potential cause of the deadly Beirut blast.

Asked in a telephone interview if there are any early findings in the investigations related to the cause of the explosion, she said, “There are no preliminary results or clarification.”

Calls have been growing for an international investigation into the blast. “Former Prime Ministers Najib Mikati, Fouad Siniora, Saad Hariri, and Tammam Salam find it necessary to ask the United Nations or the Arab League to form an international or Arab investigation committee,” according to a joint statement released by Hariri’s office.

Rami Khouri, adjunct professor of journalism at the American University of Beirut and senior fellow at Harvard University, said, “My expectation is that the political aftershocks will be as great as the explosion itself.”

“This explosion was the culmination of decades of poor governance that has shattered almost every aspect of the lives of some people in Lebanon. And all they want is to get these people who are running the country out of their lives,” he said.

There are also growing fears of food and medicine shortages, as the port where the explosion occurred is the main maritime hub for a nation heavily dependent on goods from abroad, with 60% of all imports passing through it.

Beirut’s main grain silo, located at the port, was heavily damaged in the blast and the grain supply stored there was either destroyed or rendered unusable as a result of the chemicals released into the air in the explosion, Economy Minister Nehme said. He added that there are additional grain stores in mills and other ports in the country.

Tuesday’s explosion resulted in an estimated $3 billion to $5 billion worth of damage, Beirut governor Marwan Abboud told reporters Wednesday. Though Nehme said “no one can know the numbers right now” but “it’s very high and more than our capacity.”

The economy minister said the government’s priority was to secure people’s basic necessities — mainly food but also supplies to help repair the extensive damage to homes and infrastructure across the city.

“We need glass, we need aluminum, we need wood, we need doors … everything was damaged,” he said.

Lebanon’s Health Minister Hamad Hassan said that an emergency plan was in place with field hospitals being sent from Qatar, Iran, Kuwait, Oman and Jordan. Hassan estimates that six to eight field hospitals will be ready “soon.”