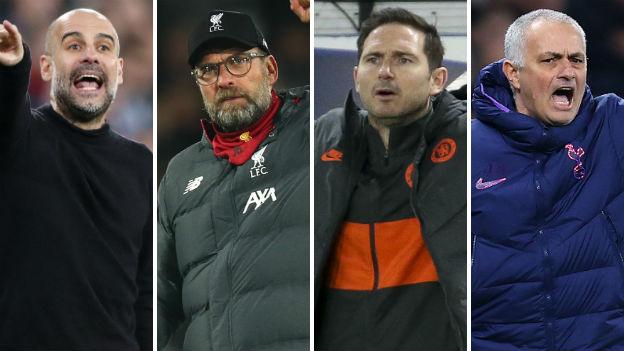 Who are the clubs well placed to progress from the Champions League last 16? And who has it all to do?

Football’s suspension because of coronavirus meant the competition was halted with four last-16 ties completed and four still to be concluded.

To assess the percentage chance of each side progressing, sports data analysts Gracenote have used their Euro Club Index – feeding the results to us at BBC Sport.

What happened in the first leg? Lucas Tousart scored the only goal while Juve defender Matthijs de Ligt was off the pitch getting treatment for a head injury. Maurizio Sarri’s side failed to have a single shot on target.

How has this score played out previously? Teams winning 1-0 at home in the first leg have progressed 23 times and been eliminated 10 times.

Any hope for Juventus? Lyon’s last foray into the last 16 did not go well in 2019. They held Barcelona 0-0 at home in the first leg but then suffered a humbling 5-1 defeat at the Nou Camp.

How have both teams done since the restart? Juve come into the game having clinched a ninth consecutive Serie A title – although they stumbled over the line with some patchy form. France’s Ligue 1 was finished early so Lyon’s only competitive game since 8 March was the French League Cup final against Paris St-Germain – which they lost on penalties – on 31 July.

Who will the winners meet in the quarter-finals? Real Madrid or Manchester City

What happened in the first leg? Manchester City produced a stunning late fightback as Gabriel Jesus and Kevin de Bruyne scored in the final 12 minutes after Isco had given Real the lead. Madrid captain Sergio Ramos was sent off, meaning he will be banned for the second leg.

How has this score played out previously? Teams winning 2-1 away in the first leg have progressed eight times and been eliminated once.

Any hope for Real Madrid? Zinedine Zidane has never been knocked out of the Champions League as a manager, winning it with each of his three attempts.

How have both teams done since the restart? Real have been in magnificent form since the coronavirus break, winning 10 and drawing their other La Liga game to wrap up the title. City have won nine of their 12 games, but lost their Premier League title to Liverpool and were beaten in the FA Cup semi-final by Arsenal.

Who will the winners meet in the quarter-finals? Lyon or Juventus

What happened in the first leg? Dries Mertens put Napoli ahead to become their all-time joint-top scorer (a record he has since claimed outright) before Antoine Griezmann’s equaliser. Barca had Arturo Vidal sent off late on.

How has this score played out previously? Teams drawing 1-1 at home in the first leg – as Napoli did – have progressed 12 times and been eliminated 24 times.

Who has the advantage? The fact that Napoli have gone out in both of their previous appearances at this stage does not bode well. Barcelona also drew their last-16 first leg last season – 0-0 with Lyon – before winning the return 5-1.

How have both teams done since the restart? Barca are in disarray. On the day they lost the La Liga title to Real Madrid, Lionel Messi said that “if we continue like this, we’ll lose to Napoli”. Napoli beat Juventus on penalties to win their first Coppa Italia since 2014 but finished outside of Serie A’s top six for the first time since 2008-09.

Who will the winners meet in the quarter-finals? Bayern Munich or Chelsea

What happened in the first leg? Bayern Munich were sensational at Stamford Bridge, blowing away Frank Lampard’s side in the second half. Serge Gnabry scored twice while Robert Lewandowski scored a third. Chelsea pair Jorginho and Marcos Alonso picked up bans for the second leg.

How has this score played out previously? Teams winning 3-0 away in the first leg have progressed five times and have never been eliminated.

Any hope for Chelsea? If we go by history alone, no. No team has overturned a 3-0 deficit when travelling away for the second leg. Saying that, Tottenham were 3-0 down on aggregate with 35 minutes to play in Amsterdam last season, so miracles do happen.

How have both teams done since the restart? Bayern Munich won every game to seal the German double and keep them in contention for the treble. They have won their past 17 matches. Chelsea booked a place in next season’s Champions League, but then lost to Arsenal in the FA Cup final on 1 August.

Who will the winners meet in the quarter-finals? Barcelona or Napoli