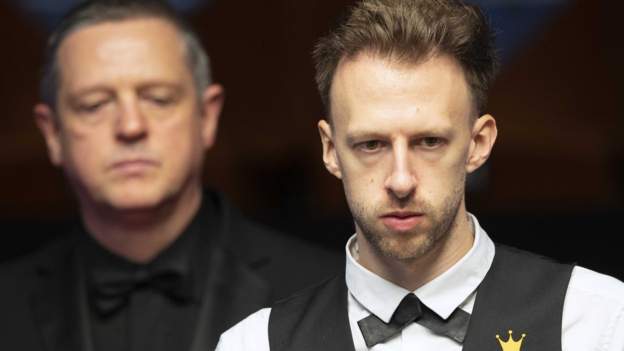 Defending champion Judd Trump moved into the quarter-finals of the World Championship with a nervy win over Yan Bingtao.

The world number one, who led 9-7 going into Friday final session, struggled to pull clear of China’s Yan but sealed his win with a superb break of 127.

Trump will now play Martin Gould or Kyren Wilson in the last eight.

Ronnie O’Sullivan and Ding Junhui are tied at 4-4 after an entertaining first session.

Five-time winner O’Sullivan opened up with 61 before China’s Ding made breaks of 57 and 76 as he reeled off the next three frames.

However, the Englishman responded by taking three consecutive frames after the mid-session, which included a break of 101 in the sixth frame, before Ding drew level.

Their second-round match resumes on Saturday afternoon, with the winner set to face Wales’ three-time champion Mark Williams in the quarter-finals.

Trump’s record-breaking season has seen him claim six ranking titles, including the Players Championship in March when he beat Yan in the final.

Yet this was a far from vintage display from the reigning champion. Trump uncharacteristically missed numerous pots and was loose with his safety play over the course of the match.

However Yan, who made breaks of 94 and 130, was also guilty of failing to convert several glorious opportunities to make the contest even closer.

His failure to cut the brown into the top-right pocket – which would have drawn him level at 10-10 – and subsequently losing the 22nd frame which lasted 52 minutes, proved crucial.

And Trump finally broke his resolve with his 101st century of the season – and first of the match – to clinch victory.

The winner of that contest will face Norway’s Kurt Maflin in the quarter-finals.